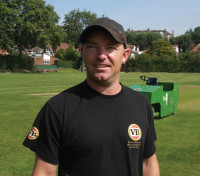 "The only way to really learn is to put the time in, and you certainly do that at Lord's. No formal qualifications were needed, just learning things the right way, day in day out"
Steve Jarvis, Head Groundsman, Hampstead Cricket Club

Just off the Finchley Road, and three or four stops up the Jubilee Line from the West End, is an oasis of club cricket, the nearest to the home of the game, Lord's. If your club's chairman is Jim Carter, on our TV screens weekly in Downton Abbey, and his actress wife Imelda Staunton and near neighbour Emma Thompson are among the supporters, then it's one to be taken seriously.

They have houses that back on to the ground, and such is their interest that they have connecting gates. When I visited this delightful inner London grassy acreage, the annual end of season showbiz charity match was days away, and groundsman Steve Jarvis waxed lyrical about the boundary café - homemade cakes and all - these big names of large and small screen would be setting up. It helps create a village feel here in the centre of London, he told me.

One of the other notable things about this club is its groundsman, an Aussie from the Gold Coast just south of Brisbane.

Admittedly, it was a rare golden day when I caught up with Steve at Hampstead Cricket Club, but the first question had to be why here when he could be in the sub-tropics around the calendar? 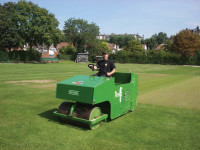 His answer was, I suppose, not so untypical - a young man back-packing to get away from the routine of insurance broking in Brisbane, then the benefits of a salaried life in banking in the City of London. That was 1999. A year on comes disillusion with the rat race and a yearning for an outdoor life: what every Aussie has deep inside. He takes 'a sickie' to go and see Lord's. Steve was a big cricket fan back home, trying always to see the first day of a GABBA test. A visit to the home of the Ashes was, therefore, a 'must do'.

Steve was straight away tempted by an opportunity to work at Lord's as a steward. He didn't need much persuading, and this is what he did for the next year, also taking on bits and pieces of maintenance work including, occasionally, assisting with pitch routines. When he was offered the chance to join Mick Hunt's groundstaff team, he jumped at it, even though he had no prior knowledge of pitch preparation or upkeep. He quickly gained experience working under Mick, and eventually took over the maintenance of the Nursery Ground, and was in charge there for over two years.

There was no formal training. At Lord's it was on-the-job training par excellence.

"I did attend one of the ECB's 3-day courses, which was useful," said Steve, "but the only way to really learn is to put the time in, and you certainly do that at Lord's. No formal qualifications were needed, just learning things the right way, day in day out."

"There is surely nothing better for an aspiring groundsman. County games, league matches, one day internationals, Test matches, cup finals. You never get much of a breather. The eyes of the cricket world are on your work and there's always the demand for a first rate end-product."

The 'Nurseryman's' move to the Hampstead club four and a half years ago was thanks to a retiring Middlesex player. Left-hand batsman Paul Weekes left the Lord's-based county at the end of the 2006 season after sixteen years, and began playing for Hampstead the following year. He put the word out that a new groundsman was needed there and, tough decision though it was, Steve felt it would be a good move. His first child was on the way and the on-going prospect of seven days a week work, albeit at Lord's, was losing its appeal. It was a 'no brainer', as he put it.

Hampstead Cricket club is, these days, actually part of the adjacent Cumberland Lawn Tennis Club, which has over 1,000 members. Each club functions individually with separate committees and chairmen, but the Cumberland calls the tune in terms of money and management and is Steve's employer.

Like his work at Lord's, it is still very much a pressure job and even more of a juggling act with priorities always hovering between tennis court and cricket pitch, plus all manner of off-pitch maintenance duties.

On the tennis side of his responsibilities, there are six artificial grass courts, four natural grass and ten hard courts. The grass courts, even late in the summer, look immaculate and are a credit to Steve's skill and dedication. It's good to see that tennis, as lawn tennis, can be available at club level, and on such a quality surface. Steve's main headache is that access to the grass courts is too narrow to enable him to use tractor equipment for renovation work.

Nevertheless, although he's a cricket groundsman at heart, he admits that, these days, he gets huge satisfaction from the grass court work, largely because of the appreciative comments of the members. Getting rainwater and, increasingly as autumn nears, leaves off all the courts is a first job each morning so that members can readily play.

Over the summer months, he has the assistance of one other full time groundsman for both the cricket and tennis club. This year, not only i 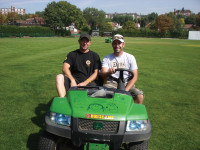 s it another Aussie, but it's his best mate from down under, going back to primary school days, Brad Markwell. He also took the same path to the Hampstead club as Steve, getting a grounding at Lord's.

The cricket club had 129 playing days scheduled this season, with not just Saturday and Sunday fixtures for the three elevens, but plenty of corporate matches on weekdays. The ground is an attractive venue for City firms to play cricket and entertain. They pay big money to hire the facilities. Evening games usually start at six o'clock and they expect, and get, tip-top play conditions and hospitality. This season there have been more than thirty such games on the fixture list, adding to Steve's pitch preparation pressure. Staff from Westfield, the shopping centres group, for example, are there every Tuesday night.

In the first season Steve was in charge at the Hampstead club, the England team used it for some training sessions. The MCC also use it from time to time for young cricketers and ladies cricket training.

"To see England players, under Peter Moores, using our square to practice was an awesome experience," said Steve.

It is truly London's inner city cricket club - MCC apart - and Steve says there is scope for yet more Middlesex and MCC usage to take pressure off Lord's a little.
For the club's machinery needs Steve goes to Richard Taylor of RT Machinery. He says the company provides him with invaluable back up and advice when it's needed.

When it comes to equipment, Steve says the Cumberland Club is very supportive. Since he took over four and half years ago he has brought in three key pieces of kit - all from RTM - he feels have improved the playing surfaces no end.

"It takes a bit longer to do the job," he says, "but it copes with the undulations much better than a gang mower and gives a pleasing look to the outfield. I also use attachments for jobs like winter snow clearance of the hard courts." 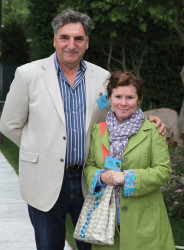 For cutting the square and the grass courts he uses a Dennis pedestrian FT set up with interchangeable attachments. The tungsten-tipped scarifier he finds particularly useful.

When he took over, the club had a roller which didn't go in reverse, producing ugly figures of eight. He managed to make a case for getting one that did, and bought a Poweroll 12 with 36 inch rolling width from RT Machinery. These models are also used at Wimbledon, and the effect shows on the four grass courts and the eleven strips on the cricket square.

The cricket club has a long term association with South Hampstead High School, an independent school for girls, which uses the cricket ground for sport during the summer term and over the summer holidays as part of a 100-year lease. Steve is responsible for maintaining and marking 8-lane running tracks and rounders pitches, so a whole host of additional health and safety responsibilities fall into his court (excuse the pun), including the security of the whole site. For this latter duty, it does help that Steve actually lives on site, above the club's handsome pavilion, which is also handy for post match socialising.

Steve's an all action Aussie all right, now also enjoying playing cricket again after Lord's 'kept him out of the game'. Pressure of work at Hampstead is still pretty much around the clock, but he does get time to turn out for its 3rd XI as a half decent batsman, as does his all-rounder mate Brad. Word has it that the quality of Hampstead Cricket Club's sledging has gone up a notch or two. There would always be Jim, Imelda or Emma to help them learn their lines, if necessary, too.