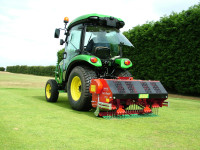 Situated half a mile from the North Norfolk coast, Mundesley Golf Club sits on the rolling hillside of the River Mun valley and enjoys panoramic views over the surrounding countryside. Founded in 1901, the golf course was designed with the help of the legendary six times Open Champion Harry Vardon and offers a fair challenge to golfers of all handicaps.

Today the Greenkeeping staff consists of Head Greenkeeper Tim Gee, with 23 years' service, assisted by Assistant Greenkeeper Phil Mansbridge, himself with 27 years in total having left at one time and returned. Newcomer Ryan Pudley is the Golf Operations Manager.

The club has just taken delivery of a new Redexim Charterhouse 1.3M Verti-DrainTM. The Verti-DrainTM 1513 is a very fast lightweight Aerator. This new model is driven by belts on each side of the machine and is powered by PTO, or by the new Redexim Carrier machine.

Tim outlined the selection process, "We borrowed a Verti-DrainTM from nearby Sheringham Golf Club and got on well with it, although it was a much larger machine. We then managed to get a 1513 on demo from Ben Burgess and considered it alongside another make. In the end the Redexim turned out to be a lot more versatile, with the build quality and mechanism of the Verti-DrainTM far superior." 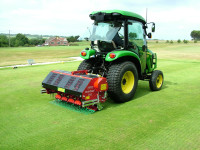 Tim found they particularly liked the quickness of the machine; being able to get over the ground in a much shorter time frame. They were also surprised about the good selection of tines available, and that changing a tine was only a 5 minute job. Using different tines has become a novelty because their old machine didn't have that facility.

Depending on the weather they like to aerate once a month on the greens and tees, but their daily summer regime starts at 5 am with cutting of the greens. They don't have a set routine but prefer to have a discussion first thing in the morning about what they think is needed and achievable during the course of the day. The tees get a mowing twice a week; the fairways once a week and the semi rough being cut once a fortnight. From then on they just roll on to the next job against a defined programme of overall maintenance that they stick to. Ground and weather conditions are obvious constraints.

"Now that we have the new Verti-DrainTM the minor water-logging we have in the lower area of course will no longer be a problem." Tim pointed out.