Whether it is preparing the gridiron at the 81,441 capacity Lambeau Field for the Green Bay Packers or readying the pitch for another cold and windy night at Stoke City Football Club's bet365 Stadium, the aim always remains the same - produce the best surface possible.

Working to those aims at Stoke City is Head Groundsman, Andy Jackson. He started his career at the English Championship football club twenty-five years ago and has seen the landscape of turf technology change dramatically over that time. To keep himself up to date with the latest developments, he often attends conferences and exhibitions, including the STMA Conference. Whilst in America, he gets the opportunity to speak to fellow professionals about the different methods they use and how they compare to his own maintenance regime.

Before a word is spoken, it is known the most significant variants between the United Kingdom and America is the sports themselves in terms of the pressure on the pitch and the length of seasons. Typically, the pre-match pageantry and stress on the turf during an NFL match far outweighs that of a football or rugby game. In recent times in the UK, NFL games held at Wembley have demonstrated the damage that can be done if the weather and other circumstances aren't on your side.

But, for Andy, clubs in the UK have only got to a point of hosting multiple sports in a season because of the leap forward in the machines they use for renovations, and the other maintenance apparatus that has been developed within Europe.

Andy explained: "I think some of the renovation techniques in the UK have come a long way in the last decade. For instance, when a field was renovated ten years ago, it was done using a Koro Fieldtopmaker and the difference in quality from a standard renovation was massive, but there was still the issue of the field being out of action for seven to eight weeks which, for most stadiums or practice pitches, wouldn't be acceptable due to the revenue income and pre-season training schedules we now have." 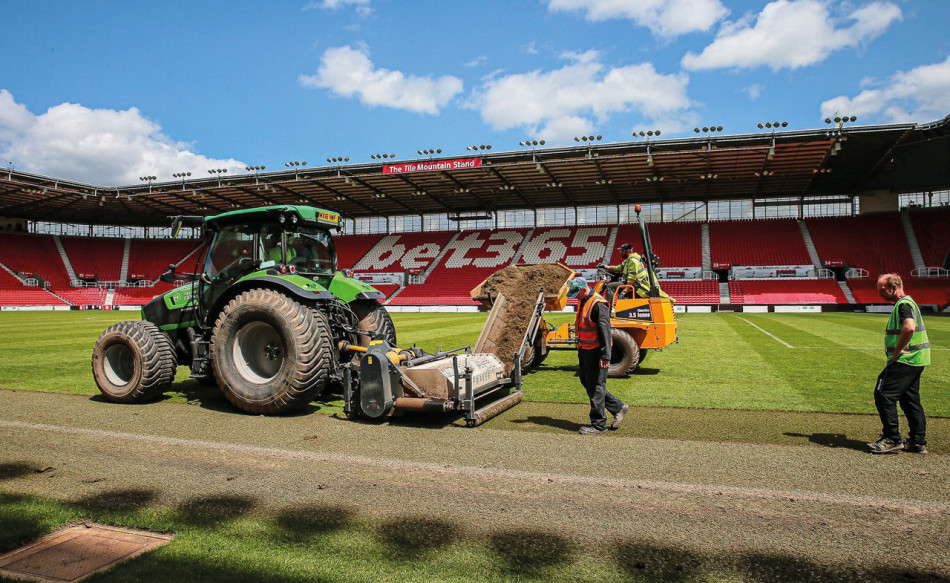 "But now, I feel we can achieve this with the new technologies at our disposal. The fields are renovated more precisely, and quicker using the Koro Universe Rotor or Terraplane Rotor, which have both been developed by Campey Turf Care Systems as part of their renovation method. Because the Universe Rotor can be used on hybrid pitches, this method of renovation is implemented on most pitches in the UK and many within Europe."

"The seed has also developed further, and soil amendments have played a key part in the process, with the core of the products coming from the US market. I'd estimate around 30% of the products I use come from North America."

"The field grow lighting systems in Europe have also helped to take pitches to a new level and, alongside artificial carpets and stitching, have been a very significant development. We have all the technology to produce a natural pitch instead of artificial because - for those with the budgets - shade and a general lack of natural light is no longer an issue in a stadium environment."

"Because of differences in the length of playing seasons between Europe and the US, many of the successful accepted European maintenance practices and products are difficult to adapt into North America. This is because there isn't a suitable period available to the field manager to implement these often disruptive renovation and maintenance practices in the growing season due to the game schedules."

"Another issue is the many regional and geographical challenges that can severely restrict the suitability of successful European practices. The distance between the furthest apart English Premier League clubs is approximately three-hundred and fifty miles, and, in that short distance, we notice a regional climatic difference. In Major League Soccer (MLS), the distance is closer to three-thousand five-hundred miles, so often only the games played in the same stadium is a comparison from one venue to another. Because of that, I think sharing practices with other groundsmen from similar climates would result in better maintenance methods going forward." 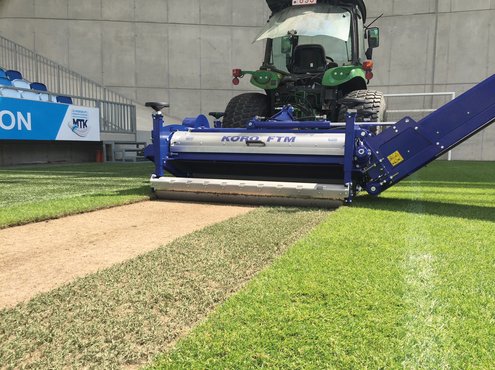 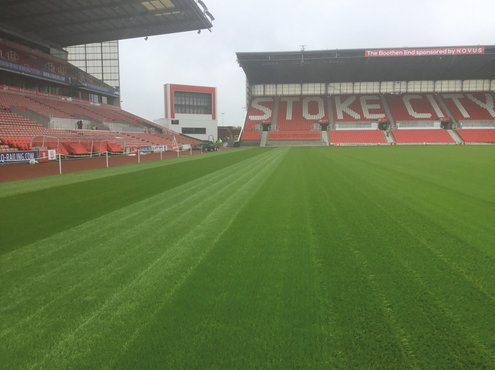 Despite using renovation practices developed by Campey and Imants BV, Andy's organic maintenance, as he briefly mentioned, is done using products almost entirely from the US market. His view is they are among the best researched available and this opinion is mirrored by his belief that the education of turf professionals in America is ahead of what is offered in Europe. There are numerous established Universities, such as Tennessee and Ohio State, that have dedicated programmes focusing on the science of turfgrass, whereas a European equivalent is harder to come by. Outside of the classroom, Andy believes learning from others in the industry is essential.

It is through sharing information at events, such as the STMA Conference and BTME, that ideas can be shared and learned from. One area this is especially important is in multi-use stadium where European groundsman have used hybrid pitches and grow lights to help facilitate renovations. Recently, this was done by Karl Stanley at Wembley to have the pitch in prime condition for cup finals and concerts, and it is getting increasingly rare to see a picture of a top European venue pre or post-match without grow lights in place. Hybrid pitches and lights have become more prevalent in America, and multi-use venues have taken another step forward with Tottenham Hotspur's £1billion stadium that features two pitches - one for football and the other for NFL. Whilst progressing venues in this way is helpful for the groundsman, it usually comes with an increased schedule, and this is where Andy thinks combining all of the technologies is vital. 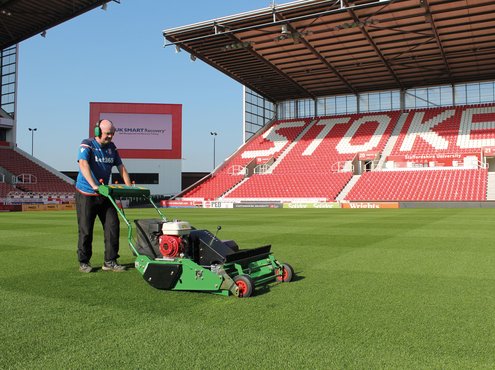 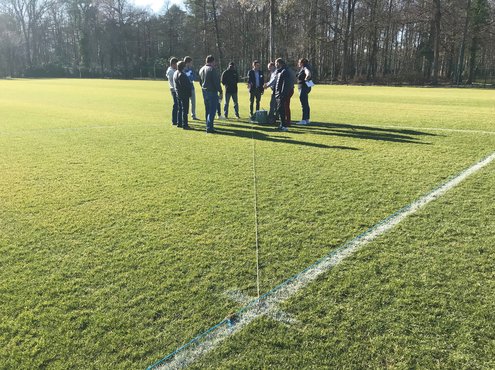 "The grounds teams that work in these multi-use stadia do a terrific job in maintaining the pitches, but most of them now have hybrid pitches and grow lights. Stadium grow lights give the manager the security to undertake a full renovation each season because, if mother nature is not helpful, the lighting technology can assist and help ensure a successful renovation. These two technologies have helped venues like Wembley Stadium complete winter renovations because that's the only time free in their schedule."

"Within the US, some of the sports - like American football - can be brutal to the surface and even more so to the grass plant. Away from the hybrid pitches and grow lights, clubs, like Tottenham Hotspur, have taken greater steps by developing a stadium with two pitches. This means when they host NFL games, their hybrid pitch slides underneath the stand and an artificial one slides into the stadium. This development has taken multi-use to another level in England, and I'm aware of a club in Europe that is aiming to take it even further."

"I think this is the way forward for big city stadia as revenue is required and often the driving factor for the business model. But a key factor to all of this is groundsmen understanding the business needs and the business understanding the groundsmen and agronomical needs. The groundsmen also need the tools to carry out the job and provide the desired pitch quality. It's a very fine line between under usage and over usage. So, working relationships between event coordinators and the grounds team are key to successful pitch and event management planning."

Everything Andy has spoken about has been learned through twenty-five years of industry experience and learning from his peers across the world. While he has covered the aspects that differ from the US and UK, some areas are no different, including work-life balance, common challenges, and always wanting to achieve the best. 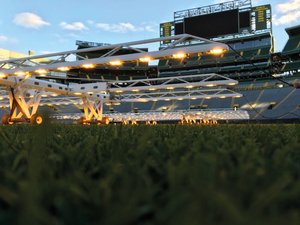 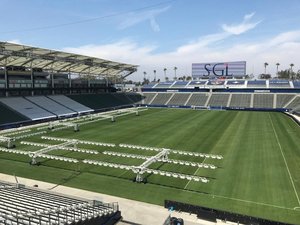 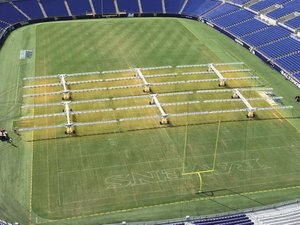 "I think it's the same for all grounds managers across the world, because we want to achieve the best, but I can only speak for myself when I say I think you have to live and breathe the job. You need passion and the plans A, B and C in your head at all times because, at the end of the day, we are dealing with hundreds of players beating our grass up daily in sometimes very challenging circumstances."

"The biggest challenge I have is not knowing the weather in one month's time. In all honesty, every day brings a different challenge, be it weather, training schedules, staff allocation or disease pressure. This is what makes us enjoy the job."

"I'm very lucky in having a fantastic team behind me who work incredibly hard. I also have the back up of key companies in the industry who will always be at the end of the phone to help me with a solution to a problem. A big assist for me is the friends and fellow turf managers who share their knowledge and come up with new ideas over a beer or two. I don't think we'd be where we are now without that."

"I'd say be brave, don't be afraid to try new ways of improving your pitch. Then believe in your decisions and share practices with fellow sportsturf managers. Sharing knowledge is the key to our industry. If I hadn't spoken to sports turf managers around the world, I wouldn't have the hybrid system, grow lights or the renovation and maintenance techniques."