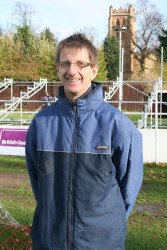 With the money generated from the FA cup run expected to approach £100,000, Stourbridge have been thrown a financial lifeline in these difficult economic times

With ten days between the draw at Plymouth and the replay, things could be described as 'a little hectic' at Stourbridge FC. For a club more accustomed to playing in front of a few hundred home fans, the impending arrival of a league two side is a big deal. Such a big deal, in fact, that the television cameras of ESPN have been wheeled out to broadcast the potential 'giant killing' live to the armchair nation.

Almost 3,000 tickets were expected to be snapped up for what was being billed as the biggest game in Stourbridge FC's 135-year history. I am here on 'the Monday after the weekend before' and the place is swarming with local council officials, FA and police representatives, as well as local and national media. Temporary stands are being erected, pitch-side advertisements rearranged, and it feels like 'the world and his wife' are queuing up to speak to Club Chairman, Ian Pilkington.

A lifelong fan of his hometown team, Ian has held various positions within the club, not least that of groundsman - before taking over the chair in 2009. That puts him in an extremely well informed position regarding pitch maintenance.

"I fell into the role as groundsman, as the chap who was doing it broke his leg and it was a case of 'what do we do now?' I work in transport for Sandwell Council and the horticultural section is next door, so they knew a few people to point me in the right direction - I was groundsman for the next five years!" 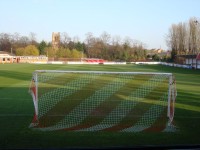 With Ian latterly occupied as Chairman, the Head Groundsman's position has been taken over by Mark Wiley - himself a long-time supporter of the club.
Ian and Mark are typical of the type of characters that bind sporting institutions together - local guys who are tireless in their efforts to progress their beloved club.

With the money generated from the FA cup run expected to approach £100,000, Stourbridge have been thrown a financial lifeline in these difficult economic times. Not that you'll find Ian getting carried away with any grand ideas; "The money is important, but we are not going to do anything stupid - what it will do will be to allow us to keeping pushing the club forward."

And push forward they certainly have. Under Pilkington's guidance 'The Glassboys' are rapidly becoming the talk of the West Midlands non-league scene, and their ambitions of competing at a higher level are looking increasingly realistic.

As with any small club on a cup run, the whole town has become consumed by cup fever - suddenly everyone is a Glassboys fan. The nickname - derived from the once thriving local glass industry - harks back to a time when the area prospered from manufacturing. These days, glass production in the town is considered more a tourist attraction than the backbone of the local economy, however, the football club is certainly central to the community in terms of its importance. 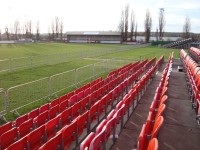 First time visitors are often bemused by the 'three sided' appearance of the ground. When it is then explained that Stourbridge Cricket Club also call the War Memorial Athletic Ground their home, then things start to make sense.

Logistically, sharing with the cricketers can create problems - for example, the two clubs opportunities for home matches are severely reduced at the beginning and end of the respective seasons. However, these issues are usually overcome amicably - it's very much a case of share and share alike around these parts.

Formed in 1876, the original occupants were Stourbridge Athletics club (hence the name of the stadium), and the legacy of the original cinder running track still exists today - albeit covered over with several inches of topsoil. As you can imagine, maintaining a football pitch that has a cinder running track running underneath it can provide its own unique set of maintenance issues. 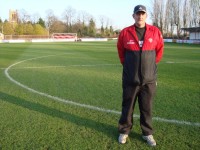 own to youth sides and even charity matches. Add to this a pitch sharing agreement with local team Causeway United, as well as the aforementioned cricket club, and you soon understand that the ground simply never gets a close season.

As far as pitch preparation goes, it was very much business as usual for the visit of Plymouth Argyle - largely at the behest of team manager and former West Bromwich Albion star, Gary Hackett.

"Our philosophy is that the pitch, in its current condition, has served us just fine up to now, so why change things for one game?" reasons Mark. And, looking at the quality of the pitch, you would have to agree with him - good grass coverage, nice colour and true ball bounce and roll, all evident on the day of my visit.
The pitch was vertidrained as part of the annual maintenance programme three weeks before the F.A cup replay and, five days prior to the game, was sprayed with a liquid iron to dress things up for the big occasion.

The club employs the services of Amenity Land Solutions for technical advice, procuring products, and for a number of the larger contract services, such as spraying and decompaction. This year, they have been using Lebanon Turf NX Pro fertiliser with great success, and are heading into the long winter period with probably the best coverage of grass they have ever had. 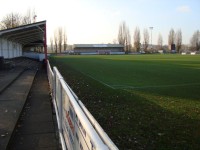 "The Lebanon product has performed brilliantly for us this season," says Mark. "We applied the 16:0:30 in July and again in September, and each application has given us steady growth, good colour and excellent all round recovery over at least a ten week period - the longevity being a key factor for us on a restricted budget."
The point about restricted budget is a good one though, once again, Pilkington's astute stewardship ensures the club seek out best value at all times. 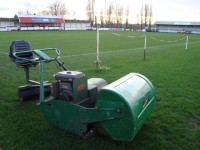 Whilst a 'what's in the shed' list is barely worth compiling, the club have committed cash for items such as an upgrade to the water supply. This enabled enough pressure to energise a large travelling sprinkler and, so, irrigate the pitch, when previously it would have simply lain dry.

The knock-on effect of improved irrigation has been an enormous improvement in the success rate and quality of the close season renovations - as the light, sandy nature of the indigenous soil, combined with the hill-top position of the ground, has always meant that holding onto moisture has been a problem.

"Hopefully, with the money generated from this year's cup run, we can sit down in a few days and look at how we might improve the pitch further," Mark says - deliberately within earshot of his Chairman, I notice!

But, for now, the small matter of beating a team four levels above them was occupying everyone's thoughts - and what a wonderful thought to hang onto!
Tuesday 22nd November 2011 - 7.15pm 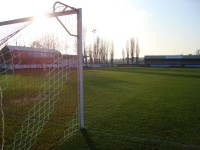 Eight days on from my last visit, I'm back at Amblecote again. Ian and Mark have somehow managed to furnish me with a ticket for the big night (these things are like gold-dust) and, as I take up my position just off the half way line, the atmosphere is electric.

The temporary ESPN TV studio, located in the 'cricket pitch corner', contains no less than Ray Stubbs, John Barnes and Peter Reid, and the capacity crowd can sense something in the air - especially when the teams march off 0-0 at half time.

The second half sees the Glassboys outplay Plymouth in all departments - and the final score of 2-0 to the home side is a thoroughly deserved reflection on a fabulous performance. With the second round draw already made - the winners rewarded with a home tie against League One Stevenage - it seems that the media madness is set to continue for at least another couple of weeks.

As I drive home, listening to the BBC Radio WM reaction to the action, I wonder just how far Stourbridge can go in this competition, as they now stand just ninety 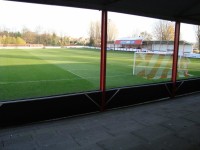 minutes away from the third round, the stage when the big boys join proceedings.

I smile, as I listen to Ian Pilkington being interviewed for the umpteenth time that week about "what it means to get this far" and "how much will the money help the club". The fact is, what is being achieved means a huge amount to everyone involved.

To see a group of people - that's players, management, directors, supporters and club volunteers - deriving so much enjoyment from football reminds me what a positive effect the game can have on people and on a community. If you want to see 'The Big Society' in action, head to Stourbridge F.C - because, at the moment, it's absolutely massive!