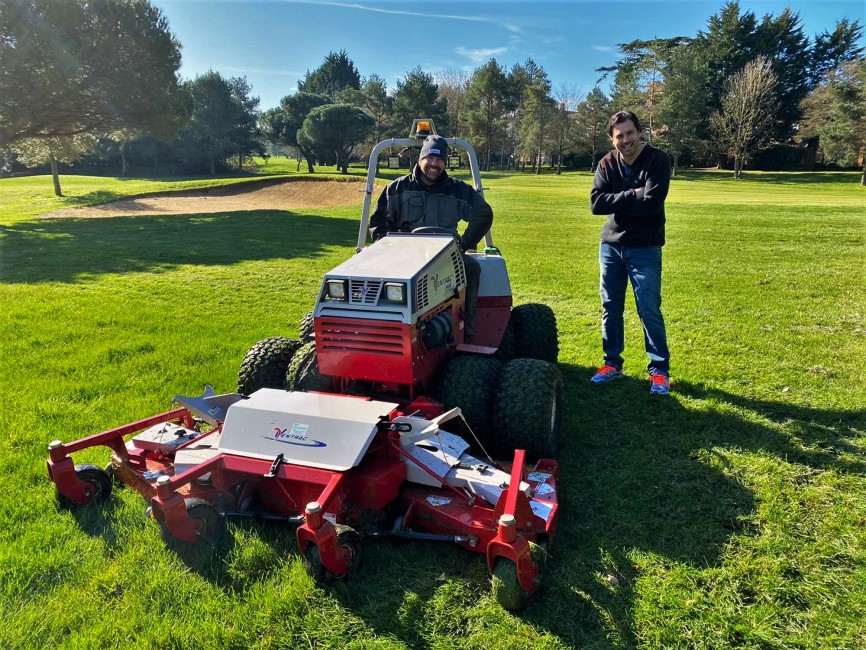 Sitting on the new Ventrac is Head Greenkeeper of the Old Course, Alvin Huxen with the owner of Essendon Country Club, Kieran Griffin

Course Manager Craig Gibson, an industry veteran of 31 years, is delighted with the new addition to his fleet and says,

"It's fantastic; I'm hugely impressed. It's not often a piece of kit excites us, but this is very different as we can use it all year round. The lads love it, it's easy to use as you can just jump on and go. It's really popular with the team.

"I first saw it at another club and was impressed with its tidy finish, then by chance Rupert Price cold-called me to see if we wanted a demo, so I invited him along. We have a clay-based courses and can be very wet in winter, but this machine is brilliant in the wet. Following the demo, it was like a 'light bulb' moment, so I made the made the business case to the club management and we agreed the purchase.

"At the moment we have the Trencher attachment as we're putting in additional drainage, but Rupert kindly loaned me a Tough Cut deck as well, which is an awesome attachment and makes light work of brush and scrub in the woodland margins.

"My next purchase will definitely be the Contour deck attachment. This is an articulating deck which we will use for our bunkers and green surrounds. That's the unique selling point of Ventrac; it's so versatile and it can get to areas on the course that other machines simply can't access."

After leaving school in 1990, Craig Gibson completed a Level 2 NVQ in Sports Turf Management before taking up his first job at Welwyn Garden City Golf Club. From here he moved to the Forest of Dean, then onto Forest Hills as deputy course manager, where he spent 10 years. He then returned to Hertfordshire as head groundsman at St Christopher's School in Letchworth before joining Essendon as course manager in 2007.

Essendon Country Club (formerly Hatfield London Country Club) consists of two 18-hole parkland courses, known as The Old course and The New course. The Old course is an undulating 6,800-yard mature parkland course designed by Fred Hawtree and opened in 1976. The New course, opened in 1992, is somewhat flatter but at 7,100 yard offers a challenge to any golfer. The club has a modern approach to golf welcoming all levels of golfer and the clubhouse, built around a 16th century barn, offers excellent facilities.