"Ideally and with time permitting we will remove the turf this summer and bring the Desso back to the surface. I have stated to the stadium, that to achieve this, I require a minimum 5 weeks from seeding. Euro 2004 may be an obstacle, if the Danish team are successful; we will no doubt show the games live in Parken on 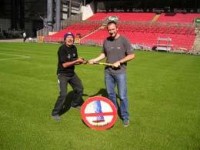 The above passage was written to conclude an article for Pitchcare in February 2004. It related to the potential renovation work to be carried out at Parken National Stadium during the summer of 2004.

The reality was that we did in fact remove the turf and expose the Desso, we did avoid crossing the re-turfing bridge, but we did not get the 5 weeks that we'd hoped for!

However I also stated at the time of writing, that the event calendar in Parken is never set in stone and events are added to the calendar throughout the year. 2004 was no exception and the challenges for the surface this summer became curious!

The now annual world grand prix speedway event deteriorates the plant to the extent that considerable remedial work is required. Therefore we could predict the condition of the surface and conclude the appropriate renovation work.

In 2003 we had been forced into the complete relaying of the surface. I had informed the directors at Parken that the durability of the surface would not be that of previous years and although the relaying had been a success, the sports department optimum would be to re-establish the Desso systemhttp://www.dessodlw.com/. Therefore considering closely the event calendar, "was this achievable?" 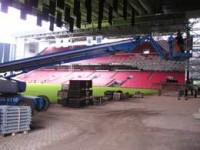 . The fixtures shown above meant that the first game was to be played on the 20th July with a concert then hosted on the 23rd. Due to the fact that 4cm (turf layer), or in excess of 500 tonnes of material required excavating, I was of the opinion that this was an unrealistic time frame. Discussions ensued and it was decided I could begin removal of the existing pitch

Undertaking this project would be a gamble and a back up option to re-turf the surface was in place again utilizing Hendriks Graszoden Groep turf system.

Due to the fact that the Desso system would be re-established, I agreed to the staging of the Super Cup on June 20th. The Desso stabilized the surface and even though the grass plants would only be nineteen days young, I felt it could be achieved. The concert on the 23rd was more of a concern and I had to date never used Terraplas (www.terraplas.com) over the top of such a vulnerable and young surface. The concert was to be an indoor event, I mean the roof was going to be closed, eliminating much needed sunlight; consequently production of the show would have to be carried out within a reduced time scale. Further more the closing of the roof and covering of the pitch had to be left to the last feasible hour.

At this point it may be beneficial to the reader to set out the actual maintenance schedule, as follows; 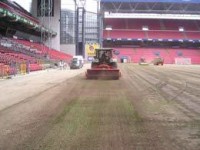 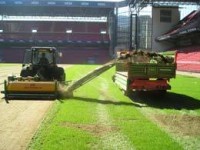 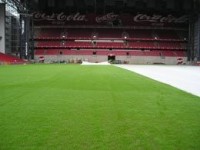 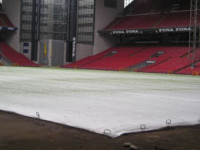 st. The MM 60 mix was treated with "Headstart" to reduce the germination period(www.advantaseeds.co.uk). A granular fertilizer 6:9:6 was applied and supplemented with granular organic seaweed to further encourage establishment. Nutrition was applied again on the 15th July. Dueto the events (Super Cup + Concert) within the forthcoming week a liquid feeding option was chosen to start acting immediately. Theoretically the liquid would give us a quicker uptake and therefore prepare the plant for the stresses it was scheduled to endure.

Germination covers were laid for nine days and the surface water monitored, it rained most days.

The covers were pealed back daily in anticipation and to check for disease.

The first cut was carried out fourteen days from seeding with only five days to the first game. Opinions differ here concerning the preferred cutting unit. I prefer the rotary deck, as I believe it reduces resistance to the young plant and helps the plant stand up prior to the cut. In preparation for the Super Cup Final the height of cut was reduced using the rotary mower from 50mm to 40mm. The cut was reduced further on game day to 35mm with a Dennis cylinder mower. Generally throughout the year at the Parken we maintain a cut of 25-30mm. 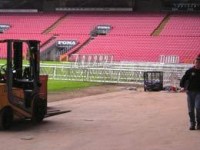 Accustomed post concert renovations are generally aimed at cleaning up the surface and de-compacting the soil. This would involve sweeping, brushing and aeration. Attempts were made to carry out the common procedures, but the grass at this stage could not withstand the severity of the operations. Treating the grass with kid gloves I managed to stand the young grass upright prior to cutting, this was achieved using a rubber tennis court drag mat, borrowed form a local club, pulled by a very light golf cart. The grass was then cut at 35mm. The height of cut had been longer than the routine height for the Super Cup and concert. At this stage I did not want to place added stress to the plant or remove too much of the leaf area, which in turn would remove vital nutrients. 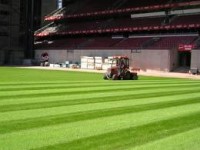 Stage front was seeded with MM60 @ 12grms/m2. Nutrition applied in granular form 11.5.5 @ 59grms+ 6.9.6 @ 19grms. The following day I applied a liquid feed 28.14.14 + seaweed + Fe. The grass had performed well at such an early stage with the 2 events, but it did appear weak and stressed. Again the liquid would enable the plant to utilize the nutrients prior to the granular feed kicking in and carry us through the first league home 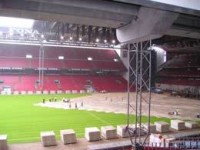 When lifting the Terraplas and examining the pitch, I announced the decision that we would not require a re-lay of the surface. The calendar now offered us the opportunity to continue to establish and improve the pitch. As stated, a ten day break followed the Champions league and we had a further 13-day break in between the 15th-29th August.

The germination covers were ready to be laid within either of these periods, but were not required. I therefore took the opportunity to allow the grass to grow throughout the period 15th-29th August. The grass had been cut at 27mm and fertilizer had been applied on August 9th, 20.10.10 @ 45grms. Permitting the grass to grow I believed, would create a greater leaf area and potentially much increase the photosynthesis capabilities.

The grass was gradually reduced to 30mm for the FCK home match on the 29th August and then reduced further to 25mm, for the Denmark v Ukraine World Cup qualifier on the 4th September. 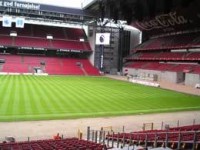 September, the pitch was verti-drained and cut down to 27mm. We watered throughout Monday evening and again added a light dose of water on Tuesday.

We are as I write, preparing for the annual Novo dinner party on the pitch. 8500 people attending a full sit down dinner party. Terraplas will be again laid tonight and lifted on Saturday morning following the dinner. A nutrition feed has been applied on the 31st Aug in liquid form, the extra growth has been reduced and the plant strengthened with 18.0.36 + seaweed + Fe.

The roof will be closed tomorrow (Thursday) 0500hrs and opened at 0900hrs Saturday. Consequently to increase the movement of sugars throughout the plant in these reduced light levels (no light!), a high rate of Potassium was also applied.

The plan for the weekend will be to remove the Terraplas, verti-drain, verti-cut, then cut the pitch at 30mm and again add more nutrition.

The next game is scheduled for the 19th September.