The SCGA has enjoyed a busy summer of 'Road Shows' and mentoring with certificates being handed to those on the mentoring scheme at Saltex in September.

Two PQS (Pitch Quality Standard) days were held with the first being staged at Epsom CC. All Surrey Championship Premier and 1st Division Groundsmen were given the opportunity to understand the process of how the measurements are taken and how to interpret the results.

The day was run by the Martin Ford from the IOG and the SCGA ECB pitch adviser John Dodwell. There was a good verity of Cricket Square cores on display including one which had a distinct layer of 'Marl' at around a depth of two inches. There were no grass roots penetrating the marl layer which we guessed went down as a top dressing over several seasons some 40-50 years ago.

A second PQS day was held at East Molesey CC. where again John Dodwell led the afternoon. This was open to all members and was well attended with over 20 groundsmen now competent in measuring the quality of their pitches to a recognized ECB specification. We thank Head Groundsman Barry Glyn for allowing us to use one of Surrey's most picturesque grounds by the Thames. 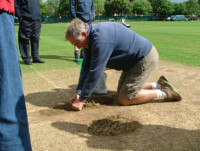 A further three Groundsmen signed up to the SCGA mentoring Scheme this year. Perry Keen from Old Rutlishians CC and two from Guildford Councils Team, Raymond Kershaw and Simon Dyer. The opportunity for these young men to work with two of Surrey's top groundsmen, who have over fifty years' experience between them,.. ranging from Club Cricket through County level to Test match pitches is a chance not afforded to many in our industry.

We are indebted to Paul Brind at Wimbledon CC and Bill Clutterbuck at Guildford CC. Without the support from Sherriff Amenity this opportunity would not be in place. We thank them for their continued support. Anyone wishing to join the mentoring scheme next Summer can contact Chris Bullen at... CBullen@surreycricket.com

Finally in August we held one of the SCGA 'instructional roadshows'. Bill Clutterbuck and Guildford CC were the hosts and theme was 'pitch repairs'. Bill yet again demonstrated his no holds barred approach and captivated all those who attended, showing there's no substitute for a bit of hard graft.

We thank Dennis Mowers and Robert Jack who supported the day demonstrating the Dennis FT range of mowers. Our next event will be the pre-season conference at the Oval in March which is open to non-members as well. Our thanks go out to all who freely give their time in the pursuit of better cricket. Merry Christmas...