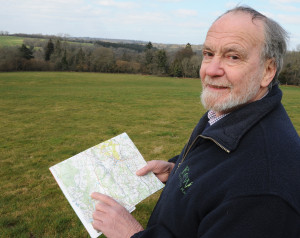 A horticulturalist who's celebrating fifty years with the same organisation is to have a piece of the Sussex High Weald named after him. Marchant's Bank has been created at Home Farm on the sprawling Wakehurst estate at Ardingly in West Sussex to acknowledge the enormous contribution David Marchant MBE has made to the running of Kew's country garden.

Better known for its botanic garden beside the River Thames in west London, Kew took over Wakehurst fifty years ago and Mr Marchant has been a linchpin to the enormous development which has taken place over that time, creating an internationally-renowned botanic garden and conservation centre as well as home to Kew's biggest conservation project, the Millennium Seed Bank.

"The parcel of land at Home Farm has been named Marchant's Bank in my honour, this because of my work managing the Wakehurst purse-strings over the past 27 years", explains Mr Marchant. "I was pleased to be able pick the piece of land and I chose this particularly steep bank because it reminded me of my earlier career as the "farm boy" and when I was driving a Fordson Major tractor across that slope dragging a pair of chain harrows. The tractor ran out of diesel and the Farmer, Nigel Radley Smith was not best pleased when he had to come and rescue me."

Mr Marchant was born on the estate and joined his father in the employ of the last private owner, Sir Henry Price. He met his wife, a fellow horticulturalist at Wakehurst and has been happily married for 45 years. "It is entirely her fault that you have to put up with me day after day", he joked. "She is the one that ensures that I get fed, watered and clothed, that I don't linger in the house making it untidy, or get under her feet."

At a celebration tea party Mr Marchant was presented with a gold Kew badge, an honour normally reserved to Trustees of the organisation.

Marchant's Bank has been registered with Ordnance Survey and will soon be appearing on maps.