Sustainable golf. They have become the new 'buzz words' in greenkeeping circles. But what exactly is it? On the following pages one of the country's leading exponents of sustainable golf, Paul Lowe, gives us his experiences.

Paul is Course Manager at the Rhuddlan Golf Course in North Wales. He will be known to many as 'Lowie' on the Pitchcare Message Board, always prepared to offer sound and sensible advice to questions posted.

One of the reasons Paul was chosen to be the course manager was simply because of his interest in sustainable golf.

Paul began his greenkeeping career in 1989 at Eastham Lodge Golf Club in the Wirral. In March 2001 he was appointed as Course Manager at Rhuddlan. The course is set in the beautiful Vale of Clwyd in North Wales. It has some stunning views of the surrounding Clwydian Mountains which provide a sheltered climate; there are even palms growing on the course! 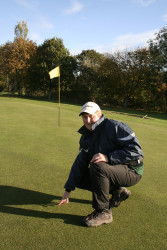 Rhuddlan is a gently undulating parkland course designed by Hawtrees & Co. It provides an excellent test of golf for all handicaps and is regularly used as a venue for County and National Championship Events.

One of Paul's first tasks, on joining Rhuddlan, was to update the course policy document. A number of independent consultants were asked to give their suggestions on how the course should be managed and, with their input, a ten year plan was created. This was ratified by all committee members of the club and supported by the playing members.

Paul has always had a simple 'don't feed the weed' philosophy. It is one that was encouraged by his tutors at college and during his time at Eastham Lodge. Now he is taking this traditional 'Jim Arthur' approach to its ultimate level and, with the help of his team of dedicated staff, and the backing of the club's committee and members, is achieving considerable success In simple terms, it is a practice that requires minimum chemicals, fertilisers and water, and maximum aeration and topdressing. It's about creating a golf course that is in total harmony with its surroundings and the local flora and fauna.

What is Sustainable Golf?

Optimising the playing quality of the golf course in harmony with the conservation of its natural environment under economically sound and socially responsible management. 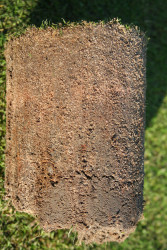 It's about maintaining the golf course with minimum fuss, it's avoiding the over use of chemicals, fertiliser and water. Maintaining the course in harmony with the environment and keeping the ecological balance.
Why is this important?

The club were spending too much money on fertilisers, chemicals and water out of a relatively small budget. It is more beneficial to our club to spend the money on topdressing and seed. Managing Poa greens effectively is costly, both financially and environmentally. I also feel that legislation, restricting the use of substances that harm the environment, will be coming into force.

The over use of chemicals, fertiliser and water will be a thing of the past. In other European countries restrictions have already been imposed. It is inevitable that the UK will have to come in to line with the rest of Europe. We are being pro-active with our management so we don't suffer the consequences in the future.

The greens perform much better when they are on the dry and hungry side; they are quicker, smoother and more consistent. However, they are never soft, target greens. I am not an advocate of target golf; golfers are getting enough help with new technology, I don't think they need more help with soft greens. Soft target greens have taken a lot of the skill out of the game.

We have a moral duty to look after the environment. It is my belief that a golf course surrounded by nature makes a pleasant environment in which to play golf. Nobody wants to play on a sterile course with no ambiance. We need to think about the course in the future. Planting indigenous trees now will create fantastic woodlands in years to come.

Over the last five years we have been introducing a more desirable grass species. 'Colonial Bents' have been used with great success and now we have introduced pure fescue grasses that are even more tolerant to stress.

They perform better under drought and frost; they need very little feed & water and are more tolerant to fungal attack. We have, by no means, met our target, we still have problem areas, but we are well on our way, we still need to promote the finer fescue grasses. We also still need to culturally discourage the weaker Poa grass. This process will continue over many more years so we avoid disturbing the playing surface, although the greens will be firmer than perhaps some would like.
What other initiatives have been implemented?

We encouraged a natural habitat for many different varieties of flora and fauna. We have some protected species so we have encouraged long grass areas, constructed new ponds and kept the woodland as natural as possible. We have built nest boxes for a variety of birds from blue tits to owls; happily most of the sixty new nest boxes were soon occupied. The last few years we have seen a marked improvement with the wildlife on the course.
What was achieved in 2006?

We implemented an intensive over-seeding programme with pure fescue. We used both Chewings Fescue & Slender Creeping Red Fescue and sowed four times at 25g sq metre each time. We used 1000 kg of fescue seed and the results were immense. This showed us that the environment was now right for fescue and not meadow grass.

During the hot spell the annual meadow grass suffered severely but, instead of feeding and watering it, we let the weed grass deteriorate - when the Poa gets anthracnose you know that the nutrient level is on the limit. We used a small application of Sulphate of Ammonia which enabled the bents fescue to dominate.

We use dry spells as a tool to stress out the Poa but 2006 was exceptional and the loss was dramatic. This is not something I would normally recommend but we had the full support of the committee to take this great opportunity to further reduce the meadow grass and introduce more fescue.

It was an excellent time for encouraging the finer grasses and we believe we have taken a few extra steps up the 'sustainable' ladder
We took the greens to the limit. As expected, this caused some consternation from members. So we stepped up our communication methods and held an extra Questions & Answers night for the members to voice their concerns. I conducted a 20 minute Power Point presentation to them on the benefits of sustainable golf and then opened up the floor to questions.

Keeping everybody at the club informed is crucial. I am very lucky to have such a dedicated green's chairman in Wynford Davies who, along with his committee and club members, has continued to support me and my staff 100%.

What ongoing work has been undertaken?

Before we started seeding, we had to make sure the environment was right for finer grasses, otherwise we would have just been throwing expensive seed away!

Over the past six years we have reduced nitrogen feed from 280kg per hectare to 25kg. We now hand water only, which has considerably reduced the amount we use. We cut no lower than 5mm. We've improved drainage, reduced compaction and eliminated thatch problems. We now topdress a little and often (150 ton/per year) and have eliminated Black Layer by using granular charcoal. Where necessary we have removed problem trees to improve sunlight and air-flow.

As the environment improved we overseeded with Bents. Over time we saw a massive increase which made it possible to further reduce the feed and water; then the environment was right for the introduction of fescue.

With the nitrogen feed down to 25kg per hectare we will apply seaweed (Porthcawl)/ iron if, and when, required. Additional applications will include granular seaweed in autumn, systemic fungicide/ worm suppressants (carbendazim) every spring & autumn and a liquid wetting agent every month between March - September. The last contact fungicide used was in December 2004.
What was your maintenance regime through 2006?

Fertiliser: We used a strictly no Phosphate, low nitrogen based fertiliser with small quantities of iron. The current product used is a combination of a granular Lawnsand in the spring, liquid sulphate of ammonia nitrogen feed in the summer and 250kg (10bags) of 4:0:0 in the early autumn. Subsequent seaweed/ iron products are used throughout the year. In 2006 we used in total 25kg N / Ha. We applied seaweed four times.

Aeration: We used pencil tines to encourage moisture penetration and the deeper rooting grasses are aerated on a monthly basis during the growing season. In between we carried out star slitting and brushing. This meant that summer aeration was carried out every two weeks (weather permitting) followed by a top-dressing. Due to the dry summer and heavy fixture list we were unable to solid tine during July.

Deep vertidraining with half inch tines was undertaken in spring and autumn. We alternated the depth to avoid soil panning - twelve inches in Spring and eight inches in autumn. Deep slitting was carried out every two weeks during the winter months (weather permitting)

Topdressing: We started the season with a heavier dressing in early spring to get the levels back after the winter. Then we followed with a little and often approach between the spring and autumn We used an 80/20mix -at1kg sqm (½ ton a green) every two weeks. We continued through the approaches. We use 150 ton per year. We topdressed the tees with a 70/30 rootzone on three occasions last year.

Recent core samples taken clearly showed the uniformity of the dressings applied which, in turn, have improved the permeability and stability of the greens. The combination of regular dressings and aeration practices has reduced black layer and anaerobic conditions on the greens. This also contributed to firmer faster greens, a recent stimp metre test recorded green speeds of up to 9ft in November, impressive when you consider they are being maintained at 6mm.

Overseeding: We have implemented an intensive over-seeding programme with pure fescue. We used both Chewings fescue and Slender creeping red fescue and sown four times this year at 25g sq metre each time. This year we used 1000kg of fescue seed. We did an additional overseeding with pure bents in August using 5g per square metre; 50kg in total

The results of all this work can clearly be seen in the condition of the course, particularly the greens. Especially when you consider the amount of play. We have 575 male member, 125 ladies, 155 juniors and welcome over 12,000 visitors a year. This means that we have in excess of 50,000 rounds each year.

The course performed exceptionally well last year and is a testament to all the hard work of my staff, members and greens committee.
Producing a sustainable golf course will not always be popular with golfers. Firm, fast greens are a challenge to us all.

However, I believe that it is good for the game and the overall health and longevity of the golf course. Long rough and ecological areas are a hazard, especially for those of us who are prone to the odd stray shot or two. So, the next time you land a ball in the long rough, spare a thought for the environment, and the fact that 'you' have just missed a well maintained target!