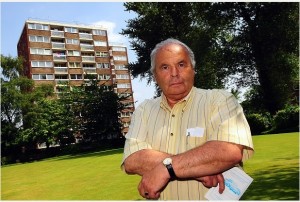 ONE of the senior figures in the Swansea bowls community fears the game could be wiped out in the face of council cutbacks.

"It's looking extremely dark," said Ken Thomas, secretary of the Dyfatty club for the last 50 years. "Teams will fold."

The future of the sport in the city has been under a cloud since last year when the council announced extra charges to clubs and also asked them to carry out some of the maintenance work previously undertaken by the authority.

But as the council wrestles with how to save £81 million over three years, Mr Thomas says there is worse to come.

"The council has told us that next year we have to pay them £3,600 plus VAT for them to maintain greens," he said. "It's going to rub the game out.

"Bonymaen and Llansamlet now share a green. All teams who can't move and have to pay that money could go defunct.

"We play at Dyfatty Park. We have got 28 members and only five work. The rest are pensioners. But it is not just the greens. From next April we have got to pay for the electricity, water and heating in the pavilion. That could be around £2,500. The council used to pay it.

"The pavilion has been there since 1922 and is also used by senior citizens, which is what most of the bowls club are. It is used three times a week in winter and almost every day in summer. It's inevitable that we are not going to be able to pay the costs."

Mr Thomas is hoping an imminent meeting with ward councillors may pave the way for a grant application to help out the bowlers.


But he fears the worst if no outside help is forthcoming. Some clubs have already fallen by the wayside.

"I have been Dyfatty secretary for 50 years," he said. "My grandfather and uncle played for the club and introduced me to it. I am still playing.

"There are 30 teams in Swansea Bowling Association, but we have lost a few. Brynmill and St Gabriel's played at Brynmill Park, but St Gabriel's aren't playing this year and Brynmill went two years ago.

"Cwmdonkin and Fairfield played at Cwmdonkin Park, but Cwmdonkin finished four or five years ago and Fairfield stopped last year. Salisbury and St Helen's have merged and are playing at Victoria Park. One green has closed there now, leaving one left.

"This club goes back 109 years and is the last bit of green left in this part of the city. It means a great deal to us, playing bowls and keeping active.

"I can understand the council's financial position. AMs and MPs taking a big pay rise is an affront to society when swingeing cuts are being imposed on local government. We are volunteers and if you take volunteers out of society with all that they do, what have you got left?".

The council has said that unprecedented budgetary pressures meant it was having to save millions of pounds over the next three years to safeguard vital services for the people of Swansea.