0 Sweetwater solution put to the test

Difficulties with grass growth and colour, along with conflicting carbonate/bicarbonate and sodium levels in irrigation water had, for sometime, created problems for Mike Wattam, course manager at East Sussex National Golf Club. The obvious remedies, such as changing sprinkler heads and controls systems, had all been tried with no improvement. Soil samples had shown these conflictions were affecting the soil itself by tying up nutrients, with the added inconvenience of sodium/potassium imbalance, exacerbating the situation even further.

Several options were evaluated to remedy the matter, including ozone treatment - considered unviable - and acid injection systems were confirmed as being too expensive to install and run, along with their inherent healthy and safety risks. Additionally, as the pumping station at East Sussex National has to provide sufficient water for a 36 hole greens, tees and fairways irrigation system, acid injection systems were thought unable to operate effectively on that scale. 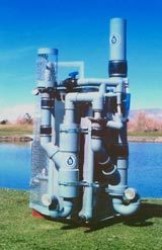 After lengthy consultations and his own extensive research, Mike Wattam opted for the Sweetwater Solution generator, distributed in the UK by Ringwood based, Hydroscape. The system gave a noticeable improvement in grass growth and greener results on fairways within six weeks, with all algae and anaerobic stench being removed from the lake used as the water source. Sodium levels have been consistent throughout the season, reducing the volume of water usage with water pH at 6.5, as compared to 8.2 previously.

Mike Wattam speaks enthusiastically about the Sweetwater Solution but does stress that the system may not be right for all golf courses. It has certainly worked for him and improvement in fairway quality pleases the East Sussex National members, but circumstances have to be considered on their individual needs. Though he does say that Hydroscape were adamant the system would only be recommended after extensive soil and water tests were carried out.

As Mike Wattam has found, the Sweetwater system can revolutionise the way golf course management approach these problems, with both a lower initial investment and running costs, a safer environment and more precise controls over pH levels.

Designed as an 'add-on' to existing irrigation systems, the Sweetwater Solution unit comprises a sulphur dioxide generator linked to the water extraction source, albeit a borehole, reservoir, lake, pond or storage tank, enabling the modification and control of pH levels in water used for irrigation purposes and, subsequently, absorption into the fine turf root zone, If, for example, the golf course is built on alkaline soil and/or the irrigation water has a higher than neutral pH, the Sweetwater Solution generator will, by modifying the characteristics of the water, improve the properties of the soil, encouraging deeper root penetration and creating ideal conditions in which acid loving grasses will thrive. In addition, the Sweetwater Solution generator reduces the need to apply fertilisers by helping grasses use nutrients and micronutrients more effectively and provides sulphur, the fourth major nutrient, in a soluble form. Ultimately, as the soil plant water relationship becomes more efficient the volume of water required to irrigatesuccessfully is reduced. Tried and tested, sulphur dioxide treated water not only improves water penetration it also helps relieve topsoil compaction and minimises the use of wetting agents.

In addition to reducing soil pH the sulphur dioxide treated water controls algae growth in reservoirs, lakes and ponds, not only improving their appearance, but also reducing the risk of algae build up in irrigation pumps, valves and sprinkler heads.