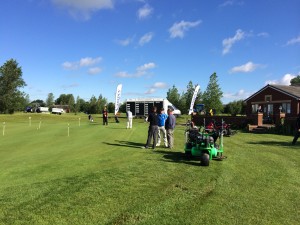 The inaugural Campey Pro-Greenkeeper Challenge, postponed earlier in the season because of torrential rain, finally got under way at Westhoughton club Hart Common.

Winners were Mark Sheppard and Simon Ashford from Wrexham club Darland who carved out a seven-under-par 65 to finish a shot ahead of a strong field of 32 two-man teams.

The event was arranged by Campey Turf Care Systems in co-operation with the PGA. Ian Campbell product specialist for Campeys organised the days and managed the demonstrations, liaising with Hart Common head greenkeeper; Richard Roberts, to ensure that everything went smoothly on the day.

Thanks should also be given for the tremendous support from sponsors; Baroness, New Holland, Trimax, Tru Turf Rollers (Double A), Mike Eaton of Paragon Finance, and Ray Street.

The winner of the individual greenkeeper competition was won by Simon Ashford of Darland GC. His prize was a free treatment using the Air Injector Air2G2 on 18 holes, awarded by event organiser Campey Turf Care. 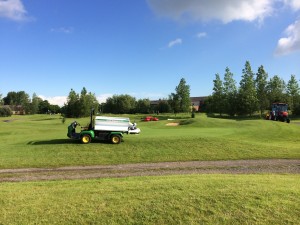 Richard Roberts Head Greenkeeper at Hart Common was delighted with how the day went. He commented that "Every Pro and Greenkeeper said what a great idea for a tournament and want to play again next year." We are hoping to make it an annual event and open it up keen golfers in all areas of the sports turf industry. The PGA will be happy to find the professionals willing to take part in the event."

Campey Turf Care Systems held a series of demonstrations of groundscare equipment on a nearby par 3 course and the putting green, during the competition. This included, the new VGR Top Changer, the Imants Shockwave, the Koro FTM the new amazing Air2G2, the Vredo overseeder and Dakota spreader.