Jane Carley reports on a partnership between groundsmen and contractor that is reaping rewards, both on and off the field of play. For it is here that the Srivaddhanaprabha family, owners of Leicester City Football Club, have transformed the facilities in the past few years. 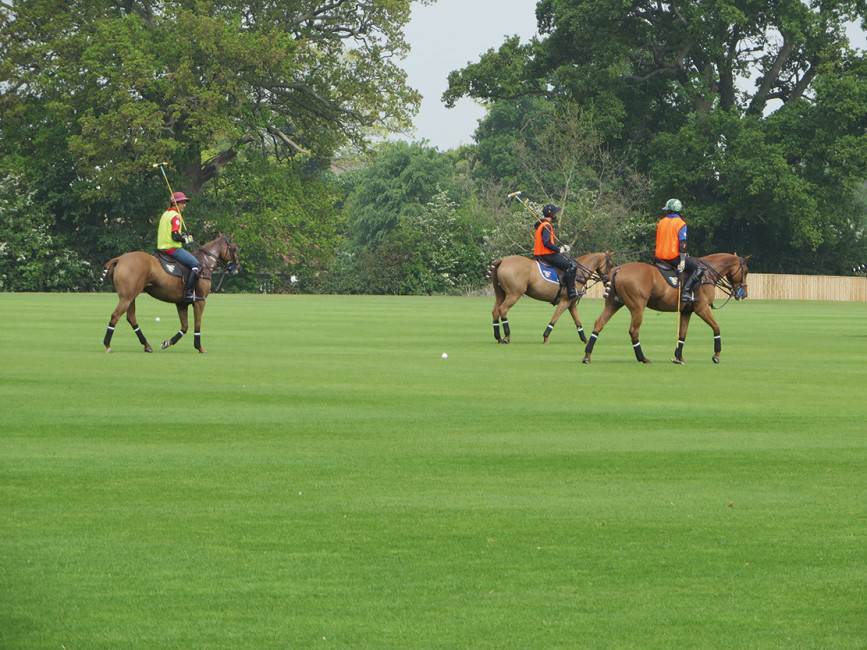 It's considered to be the sport of princes, but the King Power team has made a significant impact on polo since patron Vichai Srivaddhanaprabha, also owner of Leicester City Football Club, began to invest in playing facilities in 2014.

Winners of the Queens Cup and Jaeger Le Coutre Gold Cup in 2015, King Power Foxes retained the Gold Cup at the prestigious Cowdray Park in 2016, and play host to high goal - polo's 'Premier League' - at their base, Billingbear Park, near Wokingham, Berkshire.

Billingbear Park is just part of an impressive complex of three purpose-designed sites, where luxury facilities for equine and human athletes have been developed to meet the highest specifications in the past four years.

At Billngbear Park, plus nearby Gadbridge Farm and Noel Farm, the grounds are managed by Luc De Ville who works closely with contractor Shorts Agricultural Services.

At Gadbridge Farm, the existing pitch and stick-and-ball field were built for Jack Kidd some twenty-five years ago.

"King Power has added a new patron's house and all-weather polo arena, redeveloped former accommodation as a modern clubhouse and commissioned us to upgrade the pitch and the paddocks for the polo ponies and to landscape the site," explains their Agriculture Manager James Winfield.

"The club then purchased the neighbouring Noel Farm, which had formerly been used to grow vegetables and, in 2015, a full size pitch was constructed by White Horse Contractors," he adds.

Noel Farm also now boasts an all-weather exercise track surrounding the irrigation lake for the pitches, plus a stabling barn, due for replacement with a more aesthetically appealing stable block in 2018. 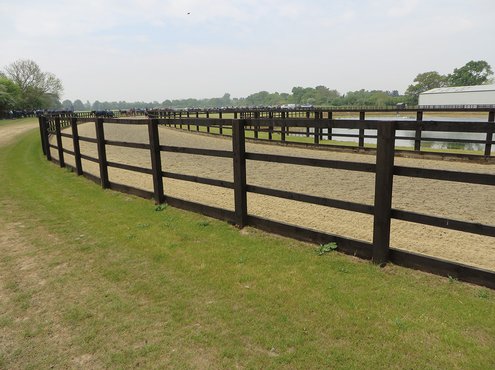 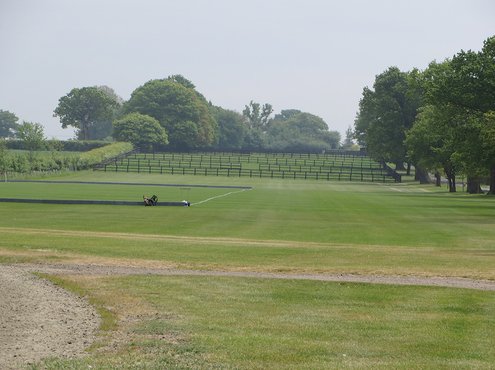 "The original plan was for the lagoon to be sited between the pitch and the stick and ball field, but we work closely with the players and they wanted the two fields to be adjacent to each other for convenience," explains Luc De Ville.

He reckons that a new polo pitch takes two years to become fully established and that, for this season, the Noel Farm pitch should be spot-on.

"It's taken a lot of work - we've applied large amounts of sand, hollow cored, Shockwaved and Vertidrained. The pitch had 500 tonnes of sand spread on it in spring 2017 alone."

Built in a period when wet summers regularly disrupted polo and made maintenance tricky, Noel Farm's pitch has drains at 4m intervals and 1m sand bands to ensure that it stays dry. Water that goes into the drains is channelled back into the irrigation pond for recycling.

Irrigation on all three pitches is applied with rain guns, preferred by polo players who suggest that the water jets on boom systems can create grooves which affect ball travel.

The three Italian-made outfits on each pitch can take 10 hours to put 10ml on, but applications are made at night, with the irrigation pattern computer controlled. 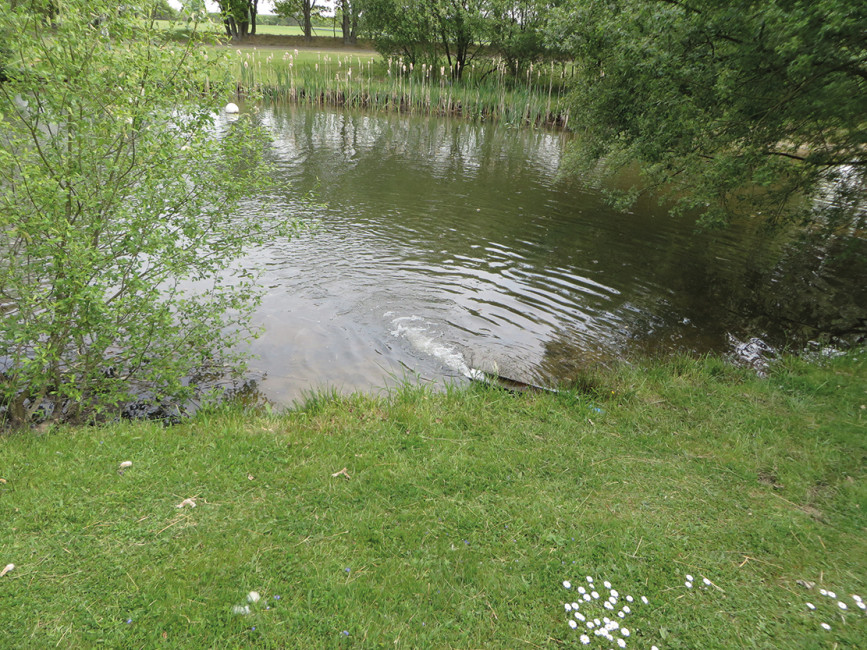 The irrigation lagoon at Billingbear Park sits well in the parkland

In 2018, the club will seek Hurlingham Polo Association approval for the Noel Farm pitch so that it can be used for matches as well as training. Shorts is quoting for the contract to drain the Gadbridge pitch and use the topsoil removed to develop and landscape a bank of old contaminated land next to the new pitch, making it a feature.

"It's another specialist service that we can offer - in the construction phase at Noel Farm, we completed excavations to eradicate knotweed and grassed over the contaminated area as an interim measure," comments James Winfield.

Whilst Gadbridge and Noel Farms are mainly used for training and as an overflow for matches diverted from other local clubs due to poor weather etc, Billingbear Park hosts a programme of high goal fixtures throughout the season, including charity matches where royalty are among the players.

In a sumptuous 150 acre parkland setting, Billingbear has a full size pitch and two practice pitches, plus purpose built stabling and staff accommodation, complete with gym and physio room for the players. There's also a luxurious clubhouse - rebuilt from the ground up - offering comforts more akin to a five-star hotel, including a huge plasma TV and a snooker room.

Pitch maintenance machinery is housed at Billingbear and shuttled to the other sites as necessary, with modern workshops and storage facilities. Shorts draws on its agricultural strengths to harvest haylage to feed the polo ponies from eighty acres of surrounding fields, where some are also pastured outside the season. 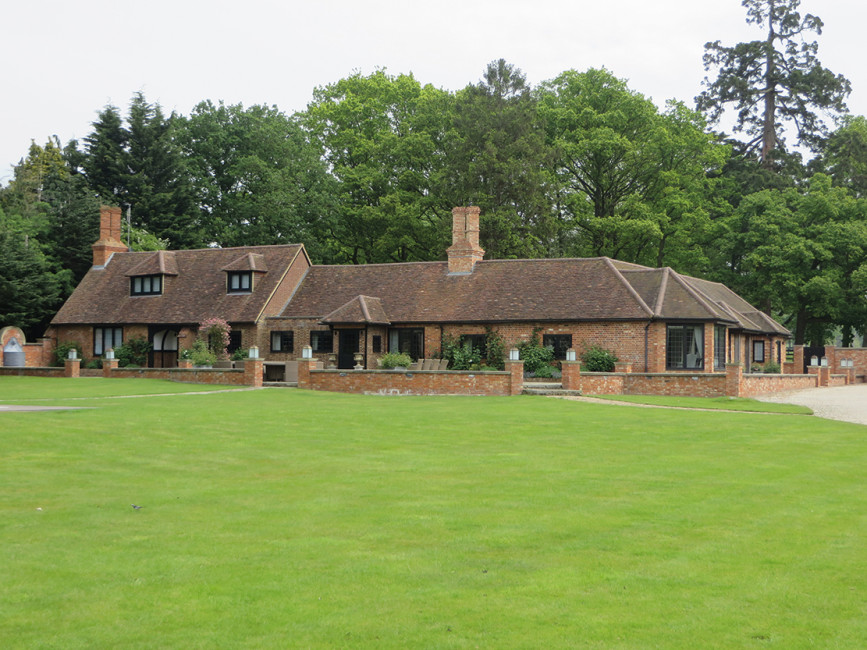 Shorts installed a new stick and ball field at Billingbear ten years ago under the previous ownership, plus a second four years ago, draining the land before using cut and fill to level, stone burying and reseeding with a ryegrass mixture.

The main pitch, constructed in 1996, can cut up in a wet season, so was drained and sand slit at the end of 2015, and James and Luc liaise closely to ensure that its maintenance requirements are met.

King Power Polo is well-equipped for routine maintenance, but Luc de Ville explains that the relationship with Shorts is a vital one.

"I rely on James's team for everything that we don't have the time or the specialist equipment to do, and the wider remit of the Shorts Group means that they have been able to provide solutions that other contractors can't, from plant hire and providing and servicing wheelie bins and skips to sourcing reclaimed bricks to build the clubhouse."

"We supply 3000 tonnes of sand and fertiliser a year, some of which we apply with our Bredal spreader; the club also has its own spreader. We supply and spread various types of specialist sports field phased release fertilisers which we apply with our Kuhn spreader. We also supply and spray herbicides and liquid seaweed as a plant nutrient," comments James.

"There's an intense period of work at the start and finish of the season - we have two Weidenmann aerators which are used to decompact the pitches. We scarify and reseed with a Vredo overseeder each autumn depending on how much play a particular pitch has had." 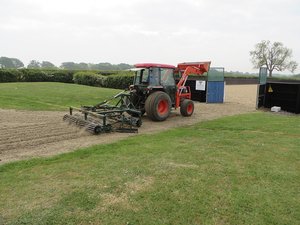 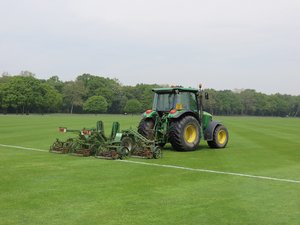 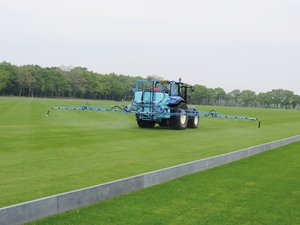 "We also maintain lawns and trees, plus the numerous small paddocks in which the ponies are grazed."

Spraying is a specialist service which is left entirely to Shorts, using a 12m Berthoud tractor mounted machine.

"With the certification and paperwork required for spraying, it's so much easier and more economical this way," comments Luc.

Liquid seaweed is applied as a tonic every six weeks, and has to be juggled around the playing schedules. Two herbicide sprays are also applied, with clover presenting a challenge on the second Billingbear pitch.

Future worm cast control is causing some head scratching. With Carbendazim withdrawn from the market, turf managers with smaller areas to treat are looking to use drag mats or brushes to remove worm casts that can interfere with both play and maintenance, but it could be a slow process on a twenty-two acre polo field! 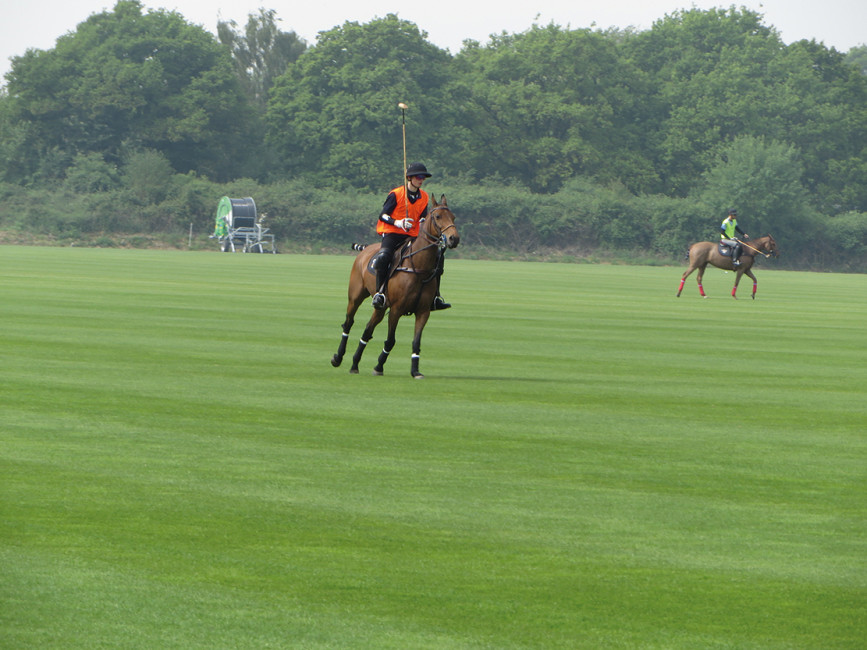 "It's specialist kit that we don't use in the agricultural side of the business," comments James. "The Vredo overseeder, for example, is an excellent disc drill, but could get damaged on farmland, so we retain it for the polo clubs, plus some football pitch work for Fleet Council."

The two main tractors are examples of the latest generation of lightweight utility power units - a John Deere 5080 and New Holland T5 on grass tyres, combining muscle with a light tread.

"We've worked for a number of polo clubs over the years, and fashions and opinions change depending on the polo manager and the players," he says. "The benefit of working for a high goal team such as King Power is that they have very high standards."

Luc and his team of six groundsmen need a serious mowing armoury for all that grass -starting off the season with a Major Swift roller mower.

"It looks old fashioned, but does a great job, and they are built to last," comments Luc. Gang mowers come in as the season approaches to get down to the playing cut height of 20mm, with an old Hayter at Gadbridge and a Lloyds, complete with rebuilt cylinders for this season, at Billingbear. 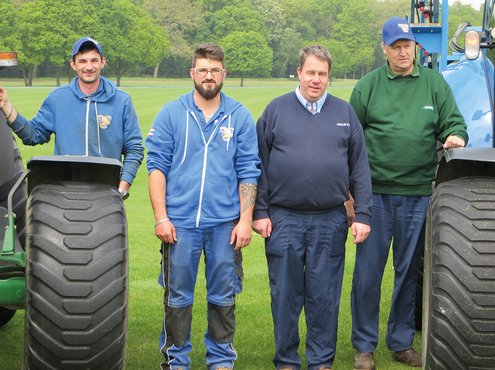 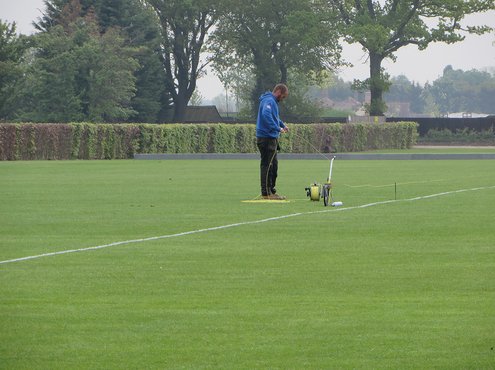 "The drivers like to use ride-on cylinder mowers for their quality finish - a Toro at Gadbridge and a John Deere at Billingbear during the season, but the older tractor mounted mowers are used first as the sand in the pitches blunts blades, plus they do a quicker job," he adds.

Another regular task is maintaining the all-weather surfaces with a harrow - there's a further exercise track at Billingbear, plus horsewalks in addition to the arena and track at the Noel Farm/Gadbridge complex.

"The horsewalks are done twice a day as it removes droppings and keeps the area tidy, as well as ensuring safe footing, while the arena is harrowed every other day," says Luc.

All routine maintenance is carried out in-house with groundsman Kamil Chec proving as handy in the workshop as he is on the pitch, and a local independent engineer on standby for anything more major.

The club recently invested in its own Imants Shockwave decompactor, after Luc was impressed with a machine that Shorts had on demonstration.

"It's quicker than a crank action decompactor, and we can make a pass with it in between fixtures if the pitches start to get too firm. We're still learning about it - we've had ponies on the pitch immediately after and it was fine to ride on as it didn't break the ground up." 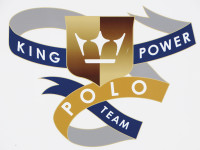 James adds that the Shockwave will also come in handy for use in conjunction with the Wiedenmanns at the start and end of the season, making one or two passes after the main decompaction, which can take up to four days per pitch.

"We're constantly in discussion with Luc to find the best techniques and regimes for an increasingly busy club, meeting the needs of the owners and the players. Standards and specifications are high and it's a real team effort," he concludes.