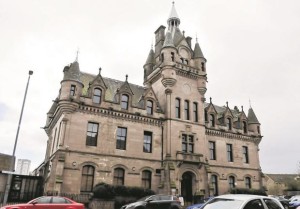 The equine hoofing on the fairways and greens of Port Glasgow - which lasted at least six hours - caused an estimated £36,000 worth of damage.

Now the proprietor of a field where the animals were kept is facing a legal battle after witnesses declared that fencing - which should have kept them penned in - was 'non-existent'.

The revelations emerged during the trial of Kilmacolm farmer William Baxter, who was cleared of a charge of maliciously driving his tractor through the fence at speed.

Golf club secretary Gordon Foster told Greenock Sheriff Court how he was alerted to the fact that 11 horses were on the course on October 20 2014.

Mr Foster said: "I got a call from the head greenkeeper at 8am.

"We had to phone the police and we tried our best to gather up the horses.

"It took us all day, until about two o'clock in the afternoon."

Mr Foster, three greenkeepers and a neighbouring farmer were involved in the emergency corralling operation.

The club secretary said: "We got some buckets of food and the horses started to follow us down the third fairway.

"They had been on the third fairway, the fifth fairway and also behind the fifth tee.

"We were also trying to keep them off of the 14th green."

The court heard that there had been an almost identical incident of horses encroaching onto the golf course in November 2013.

Club bosses were forced to reduce the size of the course from 18 holes to 12 holes and they also suffered a dip in membership numbers in the wake of that episode, it was stated.

For the full article, visit www.greenocktelegraph.co.uk.