In the last 10 years Teesside Golf Club at Thornaby, Stockton-on-Tees has undergone the biggest transformation of any club in the area, both on and off the course, which has been altered dramatically with the introduction of new tees, ponds and bunkers and the planting of more than 30,000 trees. 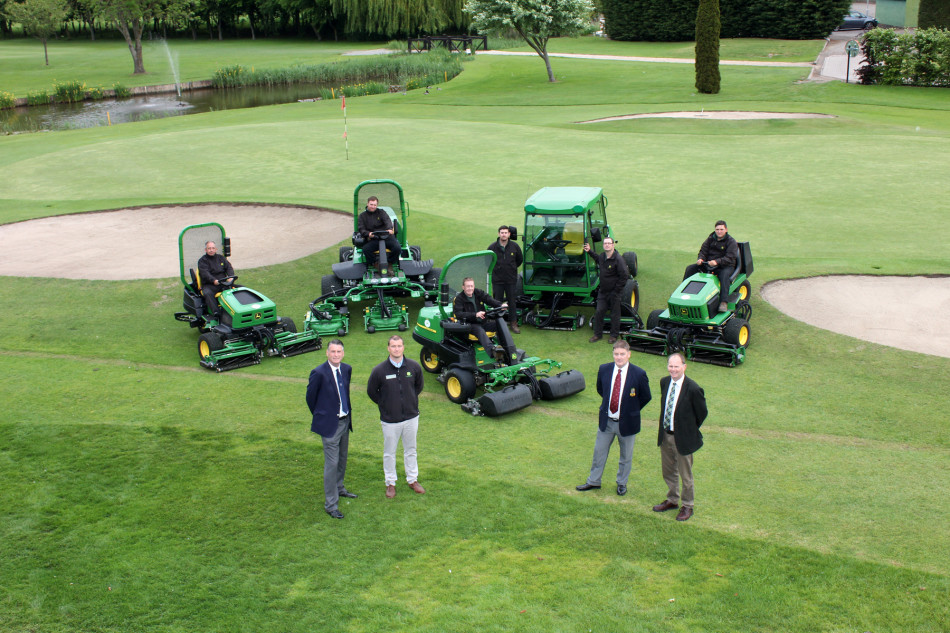 The 18-hole parkland course is situated on what used to be the old Stockton racecourse, while the clubhouse was originally a granary to which ships coming up the Tees delivered their grain. This has been fully renovated and extended, and future plans include improvements to both the practice and course facilities. Additional significant investment has more recently been made in new drainage, irrigation and John Deere course maintenance equipment to take the course and its presentation up to the desired level.

Supplied as a John Deere Financial lease package by dealer salesman Alastair Briggs of Greenlay at Cramlington, the latest equipment includes a new 9009A rotary rough mower; a used 3235C fairway cylinder mower that was specified for the practice area, but also fills in as back-up fairway mower; 2653B & 2653A tees & surrounds mowers, the latter an older machine that was refurbished as part of the deal; and a 2500B greens triplex mower.

Greens chairman Tony Foster joined Teesside Golf Club's committee last year, and straight away consulted with long-serving head greenkeeper Gary Evans over the choice of new equipment and supplier. "Downtime is an invisible but huge cost," says Tony. "We don't want our greenkeepers to be in the workshop, we need them out on the course, which is our most important asset.

"Repairs and breakdowns were becoming uneconomic, not only in terms of the maintenance expense but also the time it was costing the club - it was not cost-effective for us to keep having to repair an ageing fleet. It had got to the point where it was simply unsustainable, so the timing was right to bring in some new kit.

"We've bought a few John Deere machines over the years, and we did look at other makes, but no-one did as much as Alastair and Greenlay to get the deal. They put on a robust series of demonstrations, which showed off all the key equipment and their capabilities really well to the greenkeeping team. They also spent a lot of time with us on the different finance options and quotes, to get the deal just right for the club."

Gary Evans picks up the story: "There's a huge amount of grass here, with big areas of rough to cover," he says. "We're cutting around 160 acres across 18 holes, compared to a normal average of about 120 acres - plus I like to cut the grass as often as possible, to keep it tidy and clean, so there's a lot of work involved to achieve this.

"Therefore, the first machine we considered was the 9009A TerrainCut, as the rough was what we were really struggling with. It needed two men and machines before, but the John Deere did the job on its own in different cutting conditions, with no problems. We then went for the 2500B greens mower with QA5 cutting units, and the 2653B utility mower was the final choice - the older model has never failed us, so that was a no-brainer.

"It's all about making the team more efficient and giving us more flexibility to cope with the course conditions, weather and timing of operations. The better the cut quality and finish, the better the course is for the golfers, it's that simple."

"Greenlay and John Deere gave us the confidence that they could provide the right back-up and support, which is the basis of a good working relationship," Tony Foster adds. "Their whole approach to delivering a complete package of advice, equipment and training also meant we could promote the investment to both our members and new golfers as a really positive benefit to the club.

"I'm a great believer that you need the right tools to do the job, and with these John Deere machines we have them."