0 Terrain Aeration Albert Memorial - a walk in the park 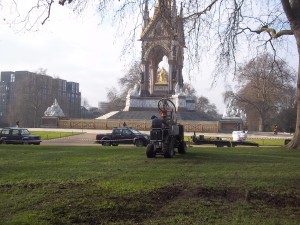 Take a stroll through London's Kensington Gardens and as you approach the Albert Memorial you can't help but notice the picture postcard view of the monument and Albert Hall, framed by London Plane trees. Naturally, the good health and longevity of the trees is considered an utmost priority so it was of concern when the Royal Parks arboriculturalists detected nutrient shortages in the soil.

Using new technology to measure the light transmitted through the leaves on the trees gave them a reading of the chlorophyll levels and their findings revealed magnesium deficiency, coupled with low overall soil fertility.

The likely cause being that leaf litter is always removed, and has been for a century, taking with it the nutrients that normally would have been recycled across the area as the leaves decay. The other factors to be considered were some areas being affected by waterlogging from water draining off the wide, hard pathways and areas compacted due to foot traffic.

The Royal Parks arboriculturalists called in Terrain Aeration to treat the areas and provide a long-term solution using their Terralift machines. "Terrain Aeration have undertaken a programme of decompaction of the soil beneath some of our most stressed trees in Green Park, Hyde Park and Kensington Gardens over the last three years." Says Arboricultural Officer, Matt Steinmann. " We know that the improvement of the soil through decompaction, injections of mycorhizzae and nutrients and subsequent mulch application will benefit our trees in the long term, extending their viable lifespan, and ensuring their continued contribution to the amenity of the park and the environment."

A tree feed mix containing slow release general nutrients and magnesium was injected, using the Terralift's ability to inject granular material via its seaweed carrier, forcing it upwards into the root zone of the trees. This also avoids losing the nutrients to the grass which would occur with surface treatment. Two Terralift machines were used to carry out the process. The Airforce, Terrain Aeration's largest ride-on, treated the avenue of trees with three lines of injection holes. One line was on the drip line of the trees, the second line two metres outside and the third two metres inside the line.

The Tracker, a small and nimble machine, was then used to treat lines in between the trees in each avenue. Air pressures of about 15 bar were used to ensure complete distribution of the nutrients within the root zone, where the fertiliser becomes available for the trees to take up as the slow release occurs. Overall, the process was a straightforward and ideal solution with the minimum disruption to the park, ensuring the longevity of the London Planes. Matt adds: "Terrain Aeration deliver their works in a timely and efficient manner, ensuring that their activities are safely and effectively carried out, and are minimally disruptive to park users."