David Churchyard has joined Terrain Aeration Services to head up the new Terrain Aeration Tree Division. The company has been treating trees for over thirty years and sees this as an opportunity to expand their specialist service. 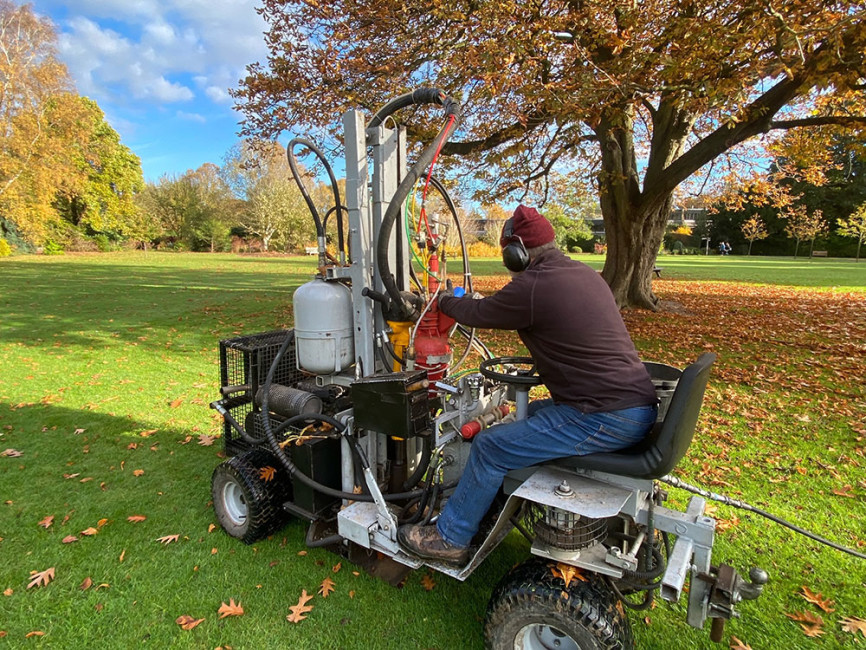 David brings an extensive wealth of knowledge regarding pests, diseases and fungal growths to trees as well as turf. He was employed as a head forester for twenty-one years on a 6000 acre estate where he was involved in working on and looking after all aspects of the estate's extensive woodlands. This covered planting heritage oaks, caring for the veteran 900-year-old trees and drawing up management plans for current and future works.

To increase his knowledge over the years, David has taken part in many lectures and courses on veteran trees in various locations, including Windsor Castle estate. He also took part in a film on AOD (Acute Oak Decline), the relatively new disease that began affecting many British oak trees since the last quarter of the 20th century. Climate changes are strongly affecting our trees and helping keep them alive is now a priority and one which David relishes in having a key role in.

Terrain Aeration's Terralift machine is recognised by Tree Officers as a solution to deep aeration and relief of compaction panning around tree roots. The Terralift is the only machine which can aerate around the root zone and put oxygen back into the soil. It breaks up compaction and panning, providing relief from waterlogging and the danger of the waterborne disease Phytophthora.

Terrain Aeration's Tree Division can inspect and advise on suitable treatment without exposing entire areas of tree roots, which may cause undue stress to the trees. One metre deep penetration aeration treatment is used around trees and to treat compacted turf and grass areas. David has joined Terrain to head and expand the division and to get the critical message out there that "it's the roots that are the root of the problem!"

Many trees of all ages are struggling with compaction. This means that essential nutrients are not getting down to the life-giving area of the tree. The message is simple, take care of the bottom-the roots-and the top of the tree will look after itself. Terrain Aeration 01449 673783 www.terrainaeration.com