Cambridge University Botanic Garden welcomes 300,000 visitors a year, making it the most visited university botanic garden in the UK. Situated in the centre of Cambridge, the Grade II listed Heritage Garden covers 40 acres and is home to a collection of over 8,000 plant species to facilitate teaching and research. 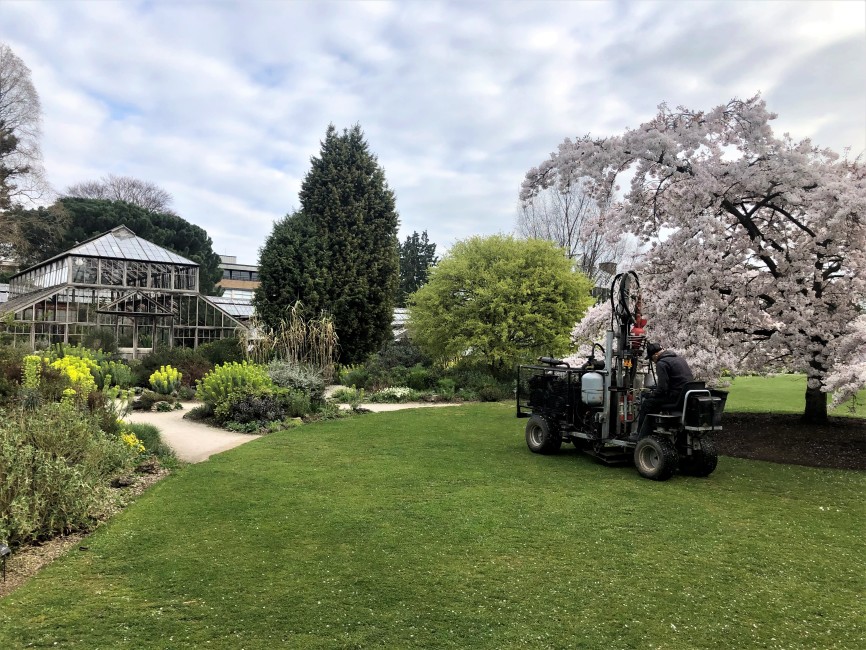 Equally, since its foundation it has provided a beautiful and tranquil place for everyone to enjoy. The Garden boasts four show lawns and the combination of foot traffic, marquee trucks and ride-on mowers leads to compaction. The Garden has been using Terrain Aeration's decompaction services since as far back as 2013 and chose the deep aeration treatment for the high-profile area of the Main Lawn in front of the majestic glasshouses.

"We know Terrain Aeration's work from years ago when development had been done at the Station Road Entrance and the lawn at the back of Cory Lodge," says Adrian Holmes, Landscape and Machinery Supervisor at the Garden. "The lawns had been re-built after the work but were found to be compacted and the soil was not good. We had a waterlogging issue for a couple of years. The Terrain Aeration treatment rectified the problem and we know from experience it's a long-term solution."

This year, the Garden's Main Lawn area was cordoned off, the machine operation creating considerable interest amongst students and visitors, and Terrain Aeration's Terralift set to work. The weather was very good and dry, and the ground was worked easily without the need to use the Terralift's JCB hammer drill. The machine's probe is driven down a metre deep and highly compressed air released up to a maximum of 20Bar (280psi) to fracture the soil, opening it up for aeration, drainage and to get oxygen to the roots of the plant. On the tail end of the air blast, dried seaweed is incorporated which sticks to the walls of the fractures and fissures created by the main air blast. As pressure drops, the seaweed is mixed in the hopper unit where it swirls around with the remaining air and is then released. The seaweed swells in wet weather and keeps the fissures open.

On the Main Lawn the same process was repeated in two-metre spacings, so the underground fracturing is thoroughly linked. In some extreme cases this is demonstrated by water fountains appearing from previous probe holes. In this instance the ground was found to be not as compacted as expected and the 2,500sq metre area was completed in two days, not the original three as had been expected.

"The Terrain Aeration guys were very good, prompt and efficient and quite knowledgeable," says Adrian, "they backfilled the probe holes with Lytag, lightweight aggregate and it was as if they had never been there. It was great to have everything back to normal so quickly." The aeration treatment completed, the lawn area was immediately open for unrestricted access to the fountains, glasshouses and horticultural and National Plant Collections.