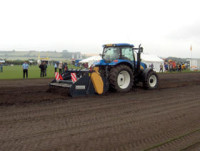 Following the overwhelming success of its Turf Show this summer and the retirement of its long standing Chief Executive David Clarke, the Turfgrass Growers' Association has completed the handover of its administration to the Processed Vegetable Growers' Association (PVGA).

The PVGA, which provides administrative support for several crop associations and grower groups, officially took over in September and will take an active role in the Association's next meeting being held at Thornhaugh, near Peterborough at the end of the year. Members and affiliates will hear a representative from the UK Irrigation Association addressing the issues concerning the use of water in turf production and will be invited to take part in an open forum discussing industry-related topics.

Tim Mudge from the PVGA and new Company Secretary of the TGA said "We're delighted that the turf growers chose the PVGA to work on their behalf and we're looking forward to getting involved with the industry and addressing the issues that concern them. The meeting will be our first opportunity to meet a lot of the members and we're pleased to have had such a good response from them.

To find out more about the TGA, visit www.turfgrass.co.uk.