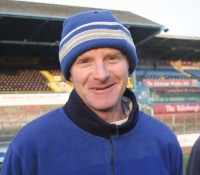 The torrential rainfall in November, that saw the Cumbrian town of Cockermouth flooded for the first time in living memory - in places up to six feet deep, nearly did for nearby Carlisle United's home match against Swindon Town.

Such was the extent of the flooding that, on Friday morning, it looked highly unlikely the game would go ahead. However, stadium manager, David Mitchell and his team, performed miracles to get the game on.

The Brunton Park pitch is always susceptible to flooding at the spookily named 'Waterworks End' when the River Eden, and its tributary, the River Petteril, rise. But, this time, it was excessive.

There are a number of drains around the ground that backfill when the rivers are high. These are not part of the pitch drainage scheme but are meant to collect, and take away, surface water from other parts of the ground. They were put in as part of an alleviation scheme after the last major floods in Carlisle in 2005.

However, the sheer amount of rain that fell on the night of Thursday 19th November - 375mm (15") in twenty-four hours - resulted in both rivers flooding and pushing huge amounts of water up the drains. The pump in the system simply could not cope and one end of the pitch was flooded to a depth of 200mm (8").

When David and his staff arrived at 7.00am on Friday, they were somewhat surprised to see just how deep the water was. "The first thing I did was to organise the hire of a pump" said David. "We do have some issues with flooding at the Waterworks End, but I've never seen it this deep. In truth, I wish the water authority or the council would do something about it! The whole drainage system should be reviewed and recommendations made to prevent flooding threatening matches."

Pumping began around midday and, within a few hours, the floodwater had been removed. "I was lucky on three counts" said David. "Firstly, that I had aerated the pitch extensively on Monday, which helped to drain some of the water away. Secondly, that no silt had settled on the pitch and, finally, the weather stayed dry and windy in the run-up to the game, which helped the drying out process enormously."

David eventually finished work at 11.00pm, but one staff member remained on site throughout the night to monitor the situation.

On Saturday morning David and his team cut the pitch with rotary pedestrian mowers and marked it out.

Prior to the match, fans were entertained by Nixon's Vixens cheerleading team - probably wearing wellies! Was it all worth it? "Undoubtedly" said David, "even though we lost! After all, it is my job, and the loss of revenue for a Saturday game for a club our size, could be damaging. And then there's the travelling fans to consider. Because of where we are, we always ask away fans to check before setting out as, occasionally, we have to call off games because of a frozen pitch. Maybe we should add 'waterlogging' to the list?"