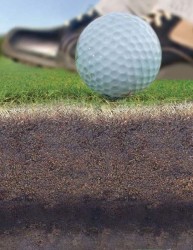 Thatch is only a problem because, in the sterile environment of sportsturf, it does not degrade.

The simple solution is to add soil biology to your management programme and thatch will be degraded in situ and converted back to plant and microbial food, humus and organic acids - the building blocks of healthy soil soil.

Hollow coring and scarifying needs expensive machines and lots of topdressing. On putting greens the disruption means you lose days of green fee income. To hollow core a hectare of greens and apply 30-60 tonnes of topdressing costs £2,000 - £3,000 per operation and, on championship courses and pay and play courses, many times this sum may be lost when reduced green fee income is taken into account.

However, if you have a reasonably well draining rootzone all this work is unnecessary!

Let us start by looking at the underlying problem. Thatch is made up of dead grass, shoots and roots that build up on the su 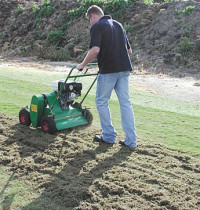 rface, which is usually diluted with top dressing.

This dead vegetable matter is full of the nutrients and trace elements that have been applied to the sward. If you could rip off the thatch layer and compost it you would make nutrient rich compost full of NPK, humus, organic acids and the bacteria, fungi, protozoa and nematodes that make up healthy living soil.
Living soil degrades thatch as it forms. To degrade a build up of thatch quickly and evenly you need two simple ingredients, soil microbes, especially fungi, and air, everything else is provided in your daily management routine.

The best form of aeration for thatch degradation is frequent use of small micro tines or a sorrel roller; there is no need to damage the playing surface in any way. Soil fungi need to be added to all but the most naturally managed surfaces.

This can be easily done with a commercial inoculant like Symbio ThatchEater. It is important that the inoculant is fungal dominant because, in the natural environment, fungi degrade the cellulose and lignin that turn thatch into humus, organic acids and release the locked up nutrients as plant food.

Once the thatch starts to degrade your fertiliser, fungicide, irrigation and wetting agent inputs will start to reduce, because water percolates faster and plant food is released into the rootzone for strong growth.

Accurate figures for the nutrient content of thatch are hard to obtain because of the different density, percentage of topdressing and fertiliser applied. Thatch contains NPK and trace elements. If you have 3cm of thatch covering a hectare of greens you have 300m3 of dead organic matter diluted with topdressing. If just half of this layer is degraded it is the equivalent of applying many tonnes of green waste.

Thatch contains at least 3gms/kg of nitrogen The average golf green produces between 5-10 tonnes of thatch per hectare per year. If this is degraded instead of removed you recycle up to 30kg of nitrogen in slow release organic form each year.

Converting thatch to plant food creates a free draining nutritious, environment that grows stronger, more disease resistant grass. Two other disease defence mechanisms can also be brought into the turf manager's armoury. Thatch is the source of nutrient for many fungal diseases, especially fusarium. If you colonise the thatch layer with beneficial fungi and bacteria, they will form a protective barrier around the roots to stop pathogens infecting the plant and out compete pathogenic disease causing fungi for nutrient.

Thatch feeds basidiomycetes, the soil fungi that create fairy rings. These fungi degrade the thatch, releasing nitrogen which creates the green ring that expands as the fungi grow. They also release hydrophobic proteins that coat soil particles, creating the white, mushroomy smelling soil that is bone dry in summer. You do not need to see the green ring to suffer from fungal dry patch. Competitive exclusion of the basidiomycetes by beneficial thatch degrading fungi will reduce the nutrient available so that the green rings and dry patch will reduce or even disappear.

Practically every turf manager that breaks down thatch biologically and increases fungal dominance in the rootzone reports an increase in the fine grasses. The increase may come from over seeding or ingress of indigenous species, especially rye, fescue or agrostis in the sward. This is because fine grasses need a good balance between fungi and bacteria in the soil to thrive, while poa annua and early successional grasses and weeds need bacterial dominant soils. As the introduced fungi degrade thatch they produce the organic acids they need for their own survival, thus ensuring continued conditions for fine grass and low thatch swards.

In summary, physical disruption costs money while natural processes create a low thatch, low disturbance environment for healthy fine grass growth. Regular hollow coring is not necessary unless the drainage is so poor that the tine holes themselves create the drainage system. 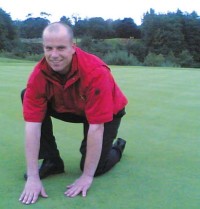 The Arden course at the Forest of Arden has hosted the British Masters and gets constant use for corporate golf, with green fees at upwards of £100 per round, so the playing surface must be excellent all year. The construction is a mix topdressing over soil that does not naturally drain well and USGA specification greens.

Rob has worked to improve the soil biology for three years and incorporates Symbio ThatchEater and Compost Teas into his management programme. The thatch degrades and feeds the microbes added in the compost tea. The soil is now friable, open, draining and full of life. On the surface fairy rings and fungal dry patch have disappeared. Living soil allows Rob to core with smaller tines, scarify less and apply less topdressing, fertiliser and, importantly for revenue, spend less time physically managing the surface.

"Biological breakdown of thatch with Symbio ThatchEater and Fungal Compost Tea has improved the performance of our putting surfaces. It has also enabled me to minimise disruptive and labour intensive practices for physical thatch removal."

The Parc is a members club with a lot of green fee golf. When the USGA specification greens were chemically managed thatch built up to 5 cm in depth. Disease, especially fusarium, was rife and some of the greens could not sustain 100% grass cover. Carl Hicks and Les Pearce started to degrade thatch biologically in 2003, and immediately fertiliser inputs dropped by over 100kg N per year.

Thatch is now less than 1cm. Disease is much reduced and fungicide applications have reduced from 5 to 2 by per year and the sward is now dominated by agrostis. Aeration is mostly by sorrel roller, Carl no longer hollow cores, saving up to 60 tonnes of topdressing per year. The savings in fungicide, topdressing, fertiliser and wetting agent more than pays for the cost of improving soil biology.

"Before we used Symbio, our parkland greens were very poor in all aspects. After five years using their 'sustainable approach' for quality turf, the greens are continuously in very good condition despite the huge amount of rounds played. We now have bent dominated swards that are improving rapidly all the time."