0 The appliance of Science at Hampton School reaps rewards 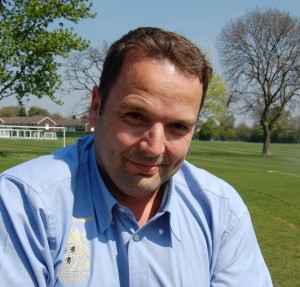 "The trick to success is to know your ground, and know what it needs," says Clive Liddiard, Head Groundsman at Hampton School. Clive, or 'The Scientist' as he's nicknamed, has been at the school for 12 years and looks after seven football pitches, four rugby pitches & six cricket pitches. Sport is very high on the agenda at Hampton School.

His first job was as a 15 year old sweeping bunkers and assisting the team on a golf course. To him, Golf had always been quite ahead of the field when it came to surface maintenance. So it was no surprise that when he made the switch to sportsgrounds he brought a lot of different skills and techniques with him that he believes really hadn't been used often in Groundsmanship - an MSc in sports surface technology and a number of other qualifications including HND, NDT and City & Guilds has helped!

Clive has a team of seven groundsman, who also work on all the gardens, site clearance etc.

A Johnsons Sports Seed customer, Hampton School traditionally used to overseed in the spring and again in the autumn, of which only about 50% would take. Knowing that different kinds of seed grew at different temperatures and in different conditions, Clive decided to change the overseeding regime so that they sowed the right type of seed at the right time of year to get optimum germination with minimum waste. 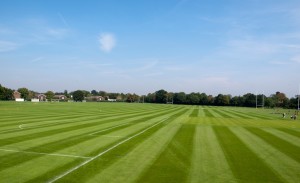 Clive was then able to work with Bob Scott at DLF/Johnsons Sports Seed to come up with what he required for the different times of the year, getting the right type of grass for his requirements and getting them to germinate and deliver good results. By planning ahead the seed sown in the spring is now in optimum condition in June/July so when he re-opens the grounds in September the grass is strong and offers better playing surfaces.

Clive also consults the STRI list, but he believes Groundsman should consider this book to be just a guide not a bible on how things should and shouldn't be done. He says for him it doesn't matter where a mixture is on the table, he looks for what cultivars he needs for his ground - the use of science should come into play. This forward thinking, and analytical approach to species and when to sow them, has managed Clive to select his mixtures to suit what he needs. He would encourage other Groundsman to adopt the same approach. 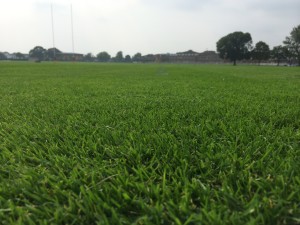 His pitches are 99.5% weed-free as weeds only grow where they have got room to grow. Clive's' approach, and Johnsons Sports seed mixtures, create such a dense sward that there's no room for weeds to grow. Grass will always outgrow the weed and his method of overseeding also means there is seed in the soil at near enough all times growing or ready to grow so as to create nowhere for the weeds to go. You just have to keep the bank of seed topped up.

They are currently sowing a ryegrass mix, blend (PM81) which germinates better in the warmer, early autumn temperatures. The weather in September 2014 was ideal for ryes, with night temperatures holding and still plenty of light around meaning Clive stood a really good chance with the PM81. He anticipates from the latest work they will get 90% germination rates. This has been applied on all surfaces except cricket. Clive will also shortly be taking delivery of J Rescue from Johnsons which he will then sow as part of his winter overseeding programme. J Rescue contains Double 4Turf tetraploid perennial ryegrass to increase disease resistance, offer high wear tolerance and fast establishment under low soil temperatures.