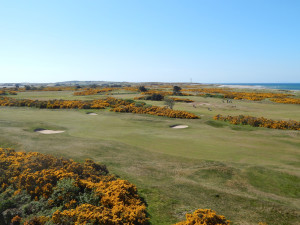 Moray Golf Club has released details of a series of course improvements that have been made ahead of one of the UK's most prestigious amateur championships. The changes at the renowned Scottish links will provide a stunning backdrop for the Carrick Neill Scottish Open Stroke Play Championship in May - a Scottish Golf Union flagship event.

The on-course improvements, which include the redevelopment of 24 bunkers, the introduction of three new bunkers and removing four, were devised to enhance the much-loved routing of the Old Course which was first laid out by Old Tom Morris in 1889. Along with new tees and an ongoing gorse control programme which has stripped back encroaching bushes in order to expand the semi-rough and give more shape to the fairways, the six-week programme of improvements has been universally welcomed at the club.

"I am extremely proud of the work carried out by the greens staff over the winter programme," explained John Thomson, captain of Moray Golf Club. "They have shown what can be achieved without having to break the bank. Their knowledge of reconstructing bunkers, building tees and managing the gorse around Moray is second to none and that makes them a valuable asset to the club."

He continued: "Although the course improvements are part of a longer-term strategy, they have also been planned to coincide with the Scottish Open Stroke Play Championship which will boast an impressive field of talented players from 29 - 31 May. The course changes are living proof you can have a championship links that presents a stern, modern-day test for the very best amateurs while remaining a fair challenge for shorter hitters."

Daniel Sommerville, Events Manager at the Scottish Golf Union, said: "We are looking forward to a great tournament at Moray at the end of the month. The Old Course offers a true championship test and we think all the players will enjoy the challenge. This year's event boasts another strong, international field and, in a Walker Cup year, we expect a high standard of golf in the quest to lift the trophy."

Moray Golf Club, which hosted the 77th Scottish Student Golf Championships while celebrating its 125th anniversary last year, is one of the most admired links courses in Scotland. Most recently it was among the climbers in Golf World's Top 100 Scottish golf courses jumping three places to number 34. Greeted with "unanimous affection", it was described by the panel as an "absolute gem" and "a hugely underrated course".

For new courses manager Kevin Thomson, the programme of works has been particularly satisfying, especially the most significant change which involved swapping the 12th tee on the Old Course for the 12th tee on the New course, which was designed by Henry Cotton. "From our point of view, these projects are brilliant," he said. "The tee-swapping was a huge job because we had to move paths and build new tees. When we stripped everything back, it looked like a bomb had gone off. It was only when things started to take shape that the golfers could see what was going on."

He continued: "It would never happen on a modern course. One of our courses has been here for 125 years and the other came along soon after. It is unusual to swap tees but along with the bunker programme, the changes have made noticeable improvements. They've made the courses harder for better players and easier for less experienced players. It was a great project to work on and what has made it especially satisfying is the positive feedback from the members."

The club has supported the changes by investing in new equipment, including a Toro rough cutter and a new Vredo overseeding machine. On the course, this has boosted the rate of sowing new fescue grasses as well as aiding the application of the weekly light dressing of sand which helps firm up Moray's famed seaside greens.

The course changes will influence most of the 36 holes at Moray Golf Club but will in particular affect the 5th, 8th, 11th and 12th holes of the Old Course and the 12th on the New course.

Some of the first players to try out the new-look Moray will be the stellar field for the Carrick Neill Scottish Open Stroke Play Championship who will be aiming to join an impressive list of past champions that includes former Ryder Cup captains Bernard Gallacher and Colin Montgomerie as well as current European Tour stars Stephen Gallacher and Richie Ramsay.