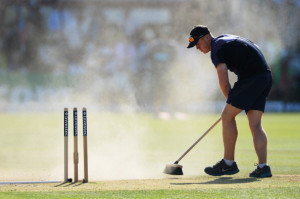 As all of us get ready for a summer of cricket, there is one person hoping that the water level subsides, and the work can be done. As February turns into March, spring arrives and no one in cricket is busier than this bloke*.

As we huff and puff for an hour at winter nets, this person is out there in the middle. Red faced, sweaty and most probably likes a drink, I bring you someone that every good cricket club needs. I bring you, the groundsman.

The chances are your groundsman likes a drink. My first recollection of this was as a lad at North London CC, watching the groundsman sit at the end of the bar putting it away; although it was much to my surprise, as a twelve year old, to see him running out of the bar vomiting into his hands one evening. Never was someone with the surname, List, more appropriately named. For some reason unbeknown to man, as night follows day, as Arsenal go out in the knock out stages of the Champions League, this man who does your ground will love a beer.

You'll know who the groundsman is. Red faced, with a permatan, he is generally the one having a row with the opening bat who has been out for a duck that day. If you can't blame the umpire, the track is the next best thing. Some opening bats out there never leave a gate, play around a straight one or follow one to the slips, trust me. The groundsman is no doubt a grumpy sod too. He treats his pitch with love and attention, as if it were a new girlfriend, only for it to rain on a Saturday morning. That is when his beloved square gets ripped up by not only bowlers, or batsmen leaving a moon sized crater whilst taking guard, but fielders too. Trust me, this annoys groundsmen no end, especially when he has 'advised' not to play on it, only for a promotion chasing or relegation threatened skipper to go against his wisdom.

The groundsman, or curator as known in the southern hemisphere, can also do a passable impression of Michael Fish too. Except that the groundsman generally gets it right. His knowledge of local weather is unsurpassed and some of the more modern groundsmen have state of the art weather apps these days too. Most however, prefer the latter day approach of wetting their finger and putting it in the air.

The groundsman can be an impatient man too, especially if the bar is open. If you have a number eleven that struggles to know which end of a bat to hold, the mower will start as he is on the way out to the middle. The groundsman is not a man to be messed with, especially at the Old Rec at St John's, where they used to get the guys from the prison next door to sort the pitch out. I reckon Brian Lara owes a few of those boys after his 375 and 400 there. Yet these people should be loved and cherished, groundsmen that is and not the inmates of St John's nick. For them, the season is March to November. As soon as germination starts at ten degrees, this man is in business cultivating his square. In September, when your kit is going into the loft, he deep drills or scarifies or gets the thatch out of the square. His work is not done when the cricket finishes.

During the season, he does the most boring job in the world and that is sitting on a roller going up and down. A cricket square needs a lot of rolling and this man does it. Mowing, moving sightscreens and putting out ropes for you. Then you turn up at 12.15 on a Saturday expecting it all to be done. No wonder he can be a cantankerous old sod. They are also under pressure. Many an amateur skipper will lean on him if he has a good quick or spin bowler, or for that matter if the opposition have. Even at Test level the amount of five day, 'Chief Executive's' pitches we have seen in recent years are a testament to that.

They are the unsung heroes of cricket and, despite their idiosyncrasies, are knowledgeable, decent folk who love the game. Every good cricket club needs a groundsman and, if you have a good one, it makes a huge difference. When you turn up in April and your ground looks as manicured as Cheryl Cole, then you know why.

When the season starts, give your groundsman a hug. Better still, buy him a pint.

Used with kind permission of www.themiddlestump.co.uk

*NB. Acknowledging the fact that there may be a number of females in the grounds industry; in this instance, the author has based his story on the groundsman being male.