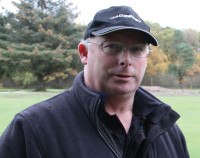 After fifteen years at the Roxburghe, Bruce Cruickshank needed a challenge. "Something to get my teeth into," he says. So, when the position of Course Manager at Hamilton Golf Club came up, he made himself available.

Eighteen months later and he is firmly ensconced in his new role, with his ambition to make the club "the best in Lanarkshire" moving on apace.

"The club had talked about the possibility to rebuild all eighteen greens and had already replaced one with a USGA specification which, they eventually decided, they did not like. So, the club invited Martin Hawtree up to take a look and he has redesigned a couple of greens that are being worked on this winter, remodelling the contours of the green and greenside bunkers. This work is being carried out by Greentech, and the membership and Martin Hawtree are delighted with the work."

All the greens are soil push-up and, with the course lying on a very heavy boulder clay, up to 30 metres deep in places, they would often become waterlogged after heavy spells of rain and, therefore, unplayable.

However, with the current cost for rebuilding a green around £25,000, Bruce is well aware that, in the current economic climate, he has to work within tight budget constraints. "We are fortunate that we have a strong membership of over one thousand," he says. "Any work that we undertake has to take into consideration the expectations of the golfers. Improving the condition of the greens and overall 'playability' is our paramount concern."

Here, Bruce has come up with a somewhat unusual solution. "The first task was to take soil samples to see exactly what each green was sat on. Once we knew what we were dealing with, we set to work." Bruce had seen the Ecosolve Drill 'n' Fill in operation and, whilst this method would probably have resolved many of the problems, Bruce simply did not have the budget to employ their services. "So, we purchased a post hole borer for £500 and did it ourselves," he states proudly.

Drilling down 4ft deep to a 9" diameter at two metre centres, the resultant holes were backfilled with 3ft of 6mm drainage grit and 12" of rootzone. "The results have been fantastic,

" he claims. "We have gone from greens that you could hardly walk on to ones that are very firm."

A second green was drilled at one metre centres - around 230 holes - and this method will be used on all the remaining greens over time. It takes around one week to complete a green.

"It looks likely that, instead of rebuilding all the remaining greens, we may just need to do one. That's a huge saving for the club and, so far, the members have been very impressed with our efforts."

Hamilton Golf Club was founded in 1892 and was first located on a site near the now demolished Hamilton Palace, former home of the Dukes of Hamilton. In 1925, the club moved to its present site and the new course layout was developed by the famous course designer, James Braid.

A feature of the original layout is the number of bunkers which were included, all of which still come into play for the average golfer today. The championship standard course is a mature parkland design, framed by over twenty species of trees, and measures over 6,600 yards from the back tees.

Bruce heads up a staff of six. Sid Adams is his assistant, along with Brian Toall, Brian Scott (nominated by Gosta college in Glasgow for the Toro Trainee of the year), Kenny Ambrose, Steve Beattie and David Tollan.

Weekends see three staff working on Saturdays, one mowing, one hole cutting and the other raking bunkers. On Sundays, only two members of staff come in, raking bunkers and cutting greens. Each task takes around three hours to complete.

Cutting heights on the greens are 3.5-4mm in the summer and between 6-7mm in the winter, cutting twice a day using Jacobsen G-Plex triple mowers. "I like to topdress the greens on a little and often approach. I aim to get around 100 tonnes of material onto the greens each year," he states. "Using our Graden, we also inject around a tonne and half of sand into each green."

"Aeration is carried out once a month to greens, tees and fairways. We have a Wiedenmann Terra Spike GXi solid tine aerator that is in constant use. We use ¾"

Tees and surrounds are cut at 9mm all year round, fairways at 12mm and the rough is maintained at 50mm.

Fertiliser programmes consist of a combination of granular and liquid formulations at the start of the growing season. An organic base feed is applied to the greens, followed by a slow release granular product that is backed up with a regular dose of Floratine liquid feeds every 4-6 weeks.

"I've also introduced a full PrimoMaxx programme to our greens, tees and bunkers surrounds," says Bruce. "This has helped reduce cutting time spent on bunker faces which, in the past, had to be cut on a weekly basis. Now, they are only cut once a month which saves time and labour and frees up the staff for other tasks, like the greens project."

"We have fifty fairly large bunkers around the course [each green has at least two protective bunkers], so you can imagine the time spent on them. Also, to help speed up the job of raking, we have bought a Super Star bunker rake."

The course is heavily tree lined with large plantations of spruce trees that were planted in the 1970s, courtesy of the Forestry Commission. "Planting trees is any easy thing to do, but people need to stop and think what the effect will be in twenty, forty or even a hundred years time. My predecessor had begun to thin out some of the trees around the greens to improve airflow, and that is something we are carrying on."

"We've taken down thirty-two Lombardy poplars which were becoming dangerous. The core wood will be sold - poplars are 'popularly' used for matchsticks and cheese boxes but also, because of the wood's flexibility, for railway sleepers."

"We've also got to decide whether to clear fell or partially fell other areas. I'm in favour of clear felling for a number of reasons. Firstly, when you partially fell, the remaining trees are suddenly exposed to winds that they were previously protected from. Often, they will be shallow rooted and immediately become a health and safety risk. In addition, by clear felling we stand more chance of selling off the wood, as larger amounts are more cost effective to remove."

"Then, we can replant with sycamore, beech, oak, larch and Scots pine, which are not only indigenous to the area but will still be here in three hundred years time. They'll be a good size within ten years."

"Any small felling is logged up and put in the car park for the members to take away, providing they make a donation to the Lady captain's charity!" says Bruce.

The club continues to work closely with the Forestry Commission - they have to seek permission for much of the tree work - and has recently set up an environment committee to promote good ecological practices. Members also have to be kept informed about the work being undertaken. A number of bird boxes have been installed around the course to encourage owls and other species to nest.

Bruce is also keen to start recycling, and is currently looking at setting up compost bay areas where leaves and debris can be stored and turned into valuable compost material, which will either be used out on the course.

Other improvements have seen the greenkeeping staff build a covered, four bay driving teaching bay for golf professional, Derek Wright, and the club has also invested in new lockers for the ladies and junior changing rooms.

Much of the machinery being used is Jacobsen. Why did he choose them?

"It comes down to customer service," says Bruce. "When I was at the Roxburghe, we had one of the other major manufacturer's machines on a five year deal. But, once the deal had been done, we never saw the rep again until the package was up for renewal. In the interim period, and even though they had lost that deal, the Fairway (Ransomes Jacobsen dealer for Scotland) representative, Euan Thomson, called in every two or three months to see if there were any problems, show us the latest developments and generally just have a blether! And that continued when I moved here."

"There was one occasion, on a Friday afternoon, when our triple greens mower picked up a stud, stone or similar and damaged the unit. Even though it was close to the end of the working week, their mechanic collected the unit at 2.00pm, reground it, fitted a new bottom blade and had it back to us by 6.00am Saturday, ready for the first weekend cut."

"So, when I came to looking at a five year package for Hamilton, including a maintenance contract, I did what I always did and contacted the dealers of the three major suppliers. All three came back with similar packages"

"The upshot is that Fairway got the deal, primarily because of Euan's previous efforts. We have to put our trust in them. If we have a problem, they are here in under two hours. We don't employ a worshop mechanic, so that is a very important part of the contract. I'd say their servicing is probably the best in Scotland at the moment."

As we conclude the interview, the Greens Convenor, Ian Donaldson, enters the discussion. "We have seen great improvement in the course since Bruce joined us. The presentation is very good, from the course furniture that Bruce has put out to new sand in the bunkers - and the playability of the course has improved considerably as well. All this helps to keep the members happy and ensures the future of the club."

Praise indeed for Bruce Cruickshank and his team.