by Kerry Haywood
in People and Football
on 08 Nov 2019

0 The dream is Real for Paul Burgess at Real Madrid

The career of Paul Burgess started at Blackpool Football Club and now he's the Director of Grounds and Environment at Real Madrid. In the latest of our Keynote interviews, Kerry Haywood spoke to Paul about his career path and life at one of the world's most iconic football clubs. 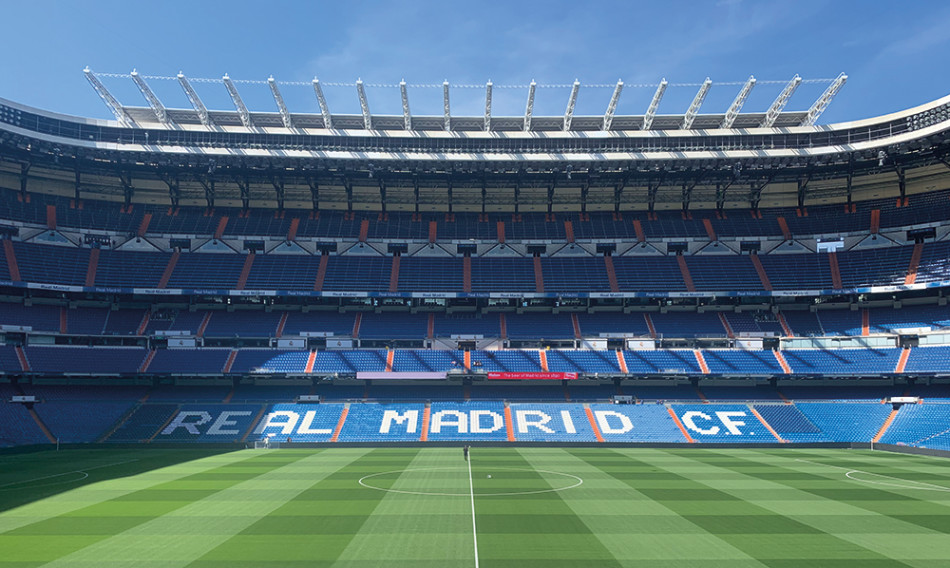 Pitchcare: What sports were you involved with in your younger days - did you play football?

Paul Burgess: I both played and watched football. It was my life.

How did you become a groundsman and what has been your career progression?

When I was fourteen years old, I realised that I wouldn't make it as a professional footballer, so I wondered how else I could get involved in the game. It was 1992 and work experience was coming up at school (which involved two weeks work based placement) and, around that time, I had read an article about a head groundsman in Shoot or Match magazine (football magazines back in the day!). The article featured Steve Braddock, Head Groundsman at Arsenal FC, and this inspired me to ask if my work experience could be carried out at my local professional team - incidentally the team I supported both home and away - Blackpool FC. My teacher thought my request was crazy but set about making it happen. I did a good job and they offered me school holiday and matchday work which I loved. Two years later, I went to Myerscough college for one year, before joining Blackpool as an apprentice groundsman (a position they created for me just before I turned seventeen). I continued at college on a one day a week release to complete my qualifications.

Roughly eighteen months later, I saw an advert for an assistant groundsman at a north London football club, but the application process went through Hewitts Sportsturf and I had no idea which team the job was for. I got the chance to interview and, lo and behold, it was conducted by the very man that I had read about and who had inspired me to do work experience at Blackpool FC; Steve Braddock. After two interviews I landed the job, moved out of my parents' house close to Blackpool and headed down to London, which was quite a big move at the time!! I worked very closely with Steve which involved long hours, but I learnt some new and interesting techniques on how to maintain and renovate football pitches. Three years after joining Arsenal, the club moved out of rented training facilities and into their own purpose-built training facility at London Colney. Initially, myself and Steve were sharing the responsibility for the supervision of this site, but it soon became clear that it wasn't the most effective policy. Steve took the decision to focus on running the training facility and so, in 1999 at the very young age of twenty-one, I became Stadium Head Groundsman - without doubt the youngest by some years in those days! Then, thanks to the success of the team, we were playing year after year in Europe which meant that the pitch and myself were starting to receive a high profile. UEFA then asked me to oversee Euro 2004 in Portugal, which I did on my own and, it's fair to say that it went very well and is arguably one of the best tournaments for pitches to date. I was then asked to oversee various finals for UEFA and took joint responsibility for Euro 2008 with another consultant.

Whilst all this was going on, I was heavily involved in the new Arsenal stadium (The Emirates) where the design brief was 60,000 capacity and a pitch as good as our old stadium at Highbury. This project gave me a powerful and important role; probably never to be repeated! As a head groundsman, I had a vast amount of influence on the entire project - from the stadium bowl shape, roof design, airflow, big screen positioning, retractable publicity boards, pitch access and pitch design. Thanks to this project, and after extensive research putting together the Rolls Royce of technology back then (in 2005), I became the first person in the world to purchase and treat a whole pitch to artificial grow lights.

Thanks to all the hard work, we not only achieved the objective of the club in making the pitch as good as Highbury, but we actually made it even better. I would go as far to say, it was the first 60,000 stadium enclosed with winter conditions to have a good pitch - this, today, is far more common. 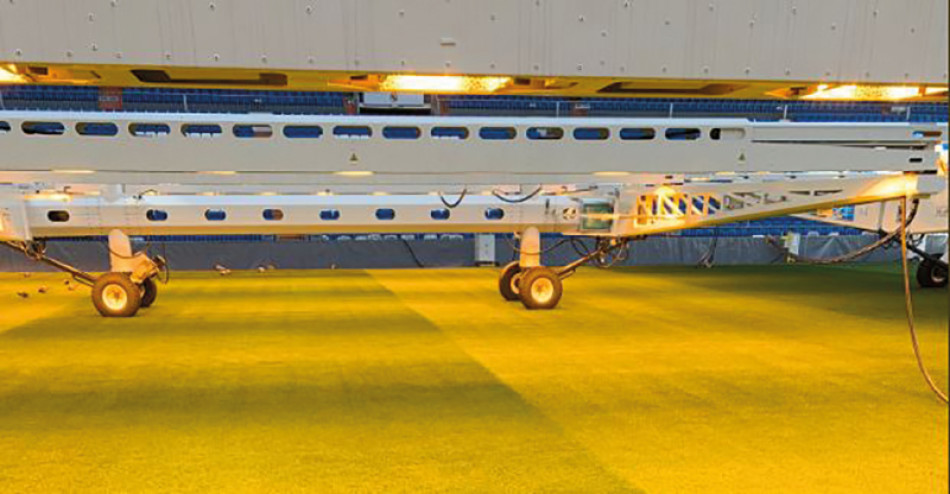 In late 2008, I was approached by the biggest club in the world, Real Madrid, to sort out their failing pitch which, at the time, was one of the worst pitches in Europe. The remit also included the establishment of the grounds and gardens for the newly constructed training facility. Following negotiations, I accepted the Grounds Manager position and left Arsenal in 2009 (thirteen years after joining) to head for Spain. The end of my first year included hosting the 2010 Champions League final and then, following nine successful years, in 2018 the club made me a Director and offered me a new 'Department for the Environment' for me to create, establish and oversee - giving me the title I have today.

You are head groundsman at one of the world's most iconic football clubs. Does that put additional pressures on your work by being in the media spotlight?

For sure yes. We have 80,000 plus at every game, very high profile players and a TV audience second to none. The Spanish media are also very intense; the two biggest selling papers in Spain write fourteen pages of material a day on the club, plus our in-house 24-hour TV channels in both English and Spanish.

What tempted you to leave one of the Premier League's top clubs to head for Spain?

I always had the ambition to take my skills abroad. I wanted to prove myself in another culture, another language, have new challenges and experience different weather and disease situations. How quickly did you settle in Spain? Was the language barrier an issue?

I settled very quickly. The language was a huge barrier at the beginning but, with time, that got easier.

What contact do you have with the professional players?

Are you able to work to your own schedule or does higher management dictate what you do on a daily, weekly or monthly basis?

I have complete control over my departments and my work - as long as I'm inside my budget, and I have the final say on pitch activity and design.

Did you find that working in a warmer climate brought additional challenges?

The climate in Madrid is very challenging. We can go to -5 or 6 in the winter to a high of 43 in the summer. Having said that winter, in many ways, is similar to the UK although drier with more blue sky. On the other hand, summer is very complicated with highs of 43 and lows of 30 and no rain for four months. Obviously, this has massive disease consquences and there is far less chemical availability compared to the UK. It is, without any doubt, a far more challenging environment to that I had in London. In addition to this, we also have major shade issues at certain times of year, and the diversity of our stadium business plan means it is one of the busiest venues in Europe. What is the most difficult problem you have had to deal with at Real Madrid?

It's hard to pinpoint any one factor. However, at the beginning, I had to overcome all of these issues: the language, weather, creating a department from scratch, bringing turf culture into the club, understanding the stadium, taking on board one of the biggest training facilities when my background was only one pitch in a stadium, water quality, new diseases, working with turfed pitches and developing a stadium business plan for the pitch ... these are just a few that spring to mind!

Do the TV pundits and press folk talk common sense? For example, some pitches come in for pre- and post-match criticism. Is that fair?

I believe it is, yes. We should try and educate them better, but I think we should be judged and made accountable both in the good times and in the bad.

Is there anything you would have done differently, professionally and personally?

Good question! I don't know really, all I can say is I did what I thought was right at the time and thankfully I have had more successes than failures. But, with hindsight, you could always maybe look at things a bit differently.

Do you have any regrets? You have been praised for raising the standard of pitches in Spain. Have you been involved in training and educating Spanish groundsmen in the art of tending turf?

Yes, I have had a very positive impact here in Spain working with various clubs, Spanish Federation and La Liga, I think I also had a huge influence when I was in the UK; without doubt, grow lights improved every single pitch and, what once was acceptable, was no longer. Arsène Wenger kindly once said to me that I improved every Premier League pitch ... his words not mine, but I do get what he is saying.

You have always been considered something of an ambassador for the groundsmanship industry. Is it in a good place right now?

That's difficult to say to be honest. I think engagement with government and federations is good, training is good however, attracting good staff with a good work ethic with desire, willingness and conviction to undertake all works I think is a cause for concern. I do believe we have become over reliant on technology and many basic principles have been lost. I also think that many people know how to do things, but I'm not so sure they all understand the reasons why.

How would you raise the profile of greenkeeping and sportsturf in general within the media?

I wouldn't - results will do that for you. Awareness of this industry needs to be pitched at schools.

Do you think those steps would encourage young people into the industry?

Going to schools and selling the industry would be a great step. Large landscaped gardens all encompassing the corporate colours and including 46,000 seasonal flowers and 9,000m2 Agrostis T1

What advice would you pass on to youngsters getting into the industry?

Listen, learn, communicate with your peers, visit other installations and have objectives and plans. Believe in them and go get them, but be patient.

Do you think it is right that grassroots groundsmanship is generally carried out by volunteers? With the amount of money in the top echelons of the game, should funding be put in place to help resolve that situation?

In all honesty, my career has always been at the high end professional level and so I don't have a good understanding at amateur level. Funding could always be distributed in another manner, but who am I to say what is the right formula? Volunteers do an amazing job and get my full respect - the beauty of our industry is, for many, a labour of love.

What is your view on the use of 3G artificial surfaces?

What machinery developments have helped you the most?

What's your favourite piece of kit?

How has the industry changed during your time?

Thank you for your time.