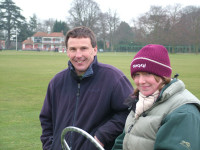 Each year I get the pleasant job of judging various cricket grounds around the country as part of the Cricket World and Pitchcare Groundsman of the Year competition. This year, on my travels, I called in to meet Bryan Evans the Head Groundsman at Wellington College Berkshire, a large 800 pupil public school facility.

As I entered the site I could see a few staff working on the squares. I approached one of them to ask the way to Bryan's office and was pleasantly surprised to find a girl rolling the square. She pointed me in the right direction and, within minutes, I was with Bryan.

The college has over 80 acres of sports facilities within a 400 acre woodland estate, with a range of natural and artificial pitches including 15 cricket squares, 12 senior size football pitches, 14 rugby pitches, 18 tennis courts, 7 grass and 2 sand filled artificial hockey pitches.

Bryan employs six groundstaff, two of them women, Jackie and Sarah. The girl on the roller, Jackie, turned out to be Bryan's daughter and she has been working at the college for eight years. After leaving school Jackie attended college and obtained qualifications in sports turf management. She was awarded 'Best Student in Turf Management' and 'Most improved Student' whilst at Guildford College. She has proved to be very dedicated and has worked her way up to the position of Deputy Head Groundsman at Wellington.

Jackie has always had an affinity with the college, having been brought up in the grounds since the age of five. At the age of fourteen she began helping her father out to earn herself some pocket money. This developed in to a genuine interest in groundsmanship, which has continued to the present day.

Cricket is the college's major summer sport. Bryan likes accountability, so he allocates facilities to particular members of the team. Jackie looks after the Colts and Yearlings squares, the 1st XV rugby pitch, shares some of the gang mowing with Sarah and is responsible for all aspects of maintenance throughout the year.

She particularly enjoys match preparation and repairing of the wickets. She also has claim to fame in that Prince Harry played on one of the cricket squares prepared by her when he turned out for Eton school against Wellington. She also prepared the 1st XV Rugby pitch for England and the All Blacks who used it as a training facility during the last Rugby World Cup.

Jackie also regularly maintains the College's fleet of five tractors and two utility vehicles and keeps maintenance records of all the machinery the department uses. Working in the inspection pit to drain the engine and hydraulic oils from the tractors and change the filters isn't an issue for Jackie.

The other female member of the team is Sarah Hack who previously worked on a golf course. Sarah spends most of her days driving tractors around the school site, carrying out most of the outfield operations, gang mowing, harrowing, fertilising and spiking. She is also responsible for the 400m grass running track and tennis facilities and is heavily involved during the initial marking of pitches.

Bryan says that Jackie and Sarah, like most women, seem to be better organised and pay a lot more attention to detail. He is very impressed with their work ethos and their determination to produce high standards.

Bryan is surprised that more women are not working in our industry. Modern technology and machinery and manual handling regulations have taken a lot of the hard physical work out of the job. There are good career development opportunities and, whilst the financial rewards may not be high, there is a great sense of achievement and satisfaction in turning out quality playing surfaces.

It is clear that Bryan is very proud of his daughter, her work, and the fact that she shares his passion to promote and sustain natural grass facilities for future generations.