0 The grass is always Greenore! 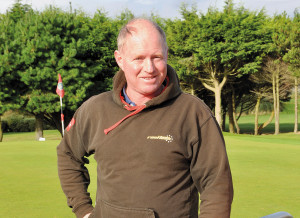 Situated on the Cooley Peninsula, on the shores of Carlingford Lough and close to the border with Northern Ireland, sits Greenore Golf Club. This close proximity means that forty percent of its members come from the north, and its stunning location is surely one of its main attractions. Chris McCullough went to meet Head Greenkeeper, Oisin White to find out more

Tucked away on the Cooley Peninsula just below the Northern Ireland border with the Republic of Ireland is what can only be described as one of the most idyllic golf courses Ireland has to offer.

It's also referred to as one of the country's "true hidden gems" when it comes to a leisure facility and one that offers visitors breathtaking views all year round.

Greenore Golf Club extends to 108 acres and is situated on the shores of the beautiful Carlingford Lough in north County Lough on Ireland's east coast, half way between Dublin and Belfast. From the course, visitors can take in the scenic views of Slieve Foy Mountain and the Mountains of Mourne in Northern Ireland across the lough.

The club was founded in 1896 and is steeped in history. It is one of the ten founding members of the Golfing Union of Ireland (GUI) in 1900.

There is a good mix of traditional links and heathland terrain on the course and additional wildflower areas just to add more colour to the views.

The fairways are surrounded by golden gorse on one side and the water of Carlingford Lough on the other; so beautiful to look at, but so punishing for any who may stray from the prescribed path.

Golfers must note that the greens are fast and many are small in size, rejecting any shot lacking conviction. This is a true test of any player's command of the traditional bump and run in the hard fast summer months or a high soft pin seeker in the winter.

Greenore Golf Club is set in a well-known golfing area, which takes in links courses such as Royal County Down and Ardglass, along with several other renowned links and parkland courses in the north east region.

A team of five staff have the pleasure of looking after the course, headed up by Head Greenkeeper Oisin White. He hails from Whitestown, which is only a few kilometres down the road from Greenore, and has worked at the club since 1984.

For the past thirty-two years Oisin and his dedicated team have tended the course, and it's a real tribute to them in how it looks and plays today.

Oisin began working at Greenore straight after leaving school, and credits the head greenkeeper at the time, Patsy Farrell, for inspiring him to carve out the long career there. "He was an excellent greenkeeper and took me under his wing, teaching me thoroughly and patiently about every aspect of the industry."

"In fact, Patsy still lives just on the edge of the course. He is now ninety-one years of age and has always been available to me for advice, never losing touch with the course that he tended to for more than fifty years."

Over the years, Oisin has embarked on further education to help him with his career. These include City and Guilds courses in Botanic Gardens levels 1, 2, 3, 4 and 5.

Budgets for the course are maintained by Oisin, within the overall budget, in conjunction with the course convenor.

The 18-hole golf course was actually built by the London and North Western Railway Company in 1896, which co-owned the railway and a hotel in Greenore, which no longer exists.

It was first opened with twelve holes in October 1896 and the following year was extended to eighteen. Its purpose was for recreation for the hotel guests and to generate passenger travel on the railway for people from both Dundalk and Newry to play golf.

The mastermind behind the course was actually a regular passenger on the train; George L Bailie from Musselbrugh in Scotland. Travelling to Greenore by train, he thought the company's land beside the railway would make an excellent golf course.

The same man went on to make a profession out of constructing golf courses and may even have been on a retainer for some of the old rail companies.

In 1900, Greenore was one of the ten clubs in Ireland deemed suitable for GUI interclub competition. The other courses that made the grade were Athlone, Lahinch, Royal Portrush, Royal County Down, North West, Royal Dublin, Portmarnock, County Louth and Foxrock.

"Greenore extends to 108 acres and is semi links," said Oisin. "It is 6608 yards and par 71. It is a pleasure for me to look after this course with my team of four full time greenkeepers and one part time seasonal worker as required."

"All of them are long serving and range in age from thirty to fifty. We can all carry out every job that is required, and most of us can turn our hand to the workshop for some maintenance work if required."

"The team are Eugene Rafferty, who has been with us fourteen years; Kieran Keenan, twenty-five years; Tommy Farrell, fourteen years; and Donal McShane, who has worked here for the past two years," explains Oisin.

Consultants are used from time to time by Oisin and his staff, but the majority of work is carried out in-house.

"The soil profile here is predominantly sand-based, with all greens and tees constructed to USGA standards."

"We don't get too much frost, being on the edge of the lough, but we do get some snow. Our course is open all year round and the course is rarely susceptible to flooding. Wise investment in drainage has resulted in very little down time on the course."

"If we do have a heavy frost, we occasionally use temporary greens, but it's a very rare occasion when that happens."

When it comes to the maintenance of the course, Oisin and his team stick to a schedule that has worked well in the area for years. "The greens are cut on a daily basis, and the fairways twice a week, as are the tees."

"We would normally cut the surrounds two or three times a week, depending on the rate of growth, whilst we cut the rough and semi-rough areas once a week."

"Aeration work is normally carried out during the first week of September and we scarify areas that require it five times a year."

"Greenore Golf Club is not too badly affected by weeds, but we do adhere to a weed and pest control programme three times during the year."
"During the autumn, we overseed the greens three times and again three times in the spring."

"For us, as a team, presentation of the course is very important as we want to present it the best way we can to the members and everyone else who plays here."

"Once the main golfing season has ended, we start levelling and reshaping the tees and bunkers. New greens will be built, if required, at this time too. Once a year, we take soil samples for analysis to let us know the soil's requirements," confirms Oisin.

"The winters here on the peninsula appear to be getting milder each year, with less frost, resulting in less down time."

Members receive regular communications about the course and the club via regular newsletters and via the club's notice boards.

Currently, this communication includes keeping members up to date with ongoing renovations of the 18th hole and on a green close to the entrance of the club.

In recent years, Oisin has also undertaken the building of new bunkers on the sixth and twelfth holes, along with new tee boxes.

The team also carry out regular work to the drainage system, which is important as the course is situated below the water level of the lough!

All the staff receive regular training via the latest courses, including health and safety.

Oisin is responsible for maintaining health and safety requirements on the course, in conjunction with Linda Clarke, the club secretary and course convenor.

Three of the team are fully trained in First Aid and in the use of CPR/Defibrillator operations. The club has its own defibrillator, situated at the entrance to the clubhouse for easy access.

"We tend to buy from local dealers, but don't necessarily stick to one single manufacturer as it's good to have a bit of variety in the shed to compare them."

"Over the years, we have invested in a number of good machines for the course, but one that has helped us immensely is the Blec Dimple overseeder."

Outside contractors with more specialist machinery are also hired in as required during the year, Oisin confirms.

"We are fairly up to date with machinery but, if I had a wish list and could buy anything I wanted, I think I would opt for a new roller, a new greens mower, three greens pedestrian mowers and a Toro Workman sprayer," added Oisin.
In the past, rabbits used to be a major pest, but that problem has been greatly reduced over the years thanks to the persistence of Oisin and his team.

Chemicals are used for any weed control programmes to keep them under control. "We work closely with all the local environment agencies and take conservation and the environment very seriously here," said Oisin. "For the past couple of years, we have been planting areas of wildflowers which, last summer, were extremely colourful and looking their best. They really add to the diversity of features we have here."

"Following a number of lean years in terms of visitor numbers, Oisin says that appears to be improving now and members, as well as visitors, are more demanding in relation to the condition and standard of the course they want to play.

"It's a huge undertaking for me and my staff to maintain 108 acres, which is such a vast area, to a high standard within guidelines and strict budgets."

"I would encourage more direct communication between greenkeepers, members and visitors to raise awareness to areas where improvements have been made. I'd also like to encourage members to maintain the course and adopt proper course etiquette; for example, with regards to divot and pitch mark repair."

"All in all, Greenore Golf Club is a super place to work and that is testament to the length of time I and many of my staff have been here. It's a great team we have here and we all work together to ensure both the club and course look their best at all times."

"I have to say, it's a real pleasure to work here every day and, with these idyllic views, it's hard to imagine being in a better working environment," concludes Oisin.