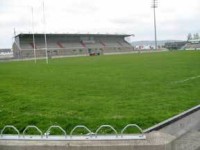 When Munster Rugby is talked about several things spring to mind. The great supporters, Heineken European Cup runners-up in 1999 and 2002 or the great win over the touring All Blacks in 1978. But maybe the thing that people relate to most is fortress Thomond Park, located in the city of Limerick in the Mid West region of Ireland, the home of Munster Rugby. It may only hold a capacity of 12,000 but its reputation is known all over Europe.

As a regular visitor to Thomond Park I was able to get access to find out who manages the pitch and what they do. Pitch maintenance is carried out by a contractor who has a list of sports clubs on his portfolio. The contractor is Nick Green Sportsground Maintenance Limited. 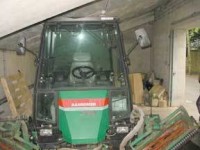 What kind of practices does Nick employ in the maintenance of the two rugby pitches? At the end of each season, on June 1st, he carries out verti-draining, sand application and overseeding. The verti-draining is carried out by a subcontractor while Nick himself does the sand application and overseeding. 100 tonnes of sand is applied to each pitch and the grass mixture for overseeding is selected by a consultant agronomist who advises Nick.

In the same month of June a slow release fertiliser with an N:P:K of 25:5:10 is applied to the pitches. During the summer months the pitches are mowed twice a week at a height of cut of an inch and half using a Ransomes 300 fairway mower. Irrigation is carried out in the summer months when temperatures in Ireland can rise as high as thirty degrees celcius. To do this a mobile irrigation unit is used which was donated to Thomond Park by the Irish Rugby Football Union.

In 2001 the two pitches were reconstructed and a grid pipe drainage system at eight metre intervals was installed, as well as sand slits at one metre intervals. Since then weed problems have been minor and therefore summer herbicide applications are kept to a minimum.

In the autumn when the season starts up again a fertiliser application is carried out with an N:P:K of 5:5:10 plus iron. This is to get the pitches ready for the winter ahead. The season starts in September and, from this point, on Munster will start playing Celtic League, Cup and Heineken European Cup matches. Pre and post match preparation will take place during this time. Pre-match preparation involves rolling the pitches and lining them while post-match preparation involves fixing divots from the game. During the winter spiking operations are carried out using a Tanco Spiker.

When spring comes around again, mowing operations are resumed as Munster get into the serious end of the season. Mowing operations and pre as well as post match pitch preparation continue into the summer as another season ends. Everyone involved plays their part in ensuring the success of the Munster Rugby organisation and Nick Green is one of these.