by Nick Harris
in Tennis, Synthetics, and Technical
on 28 Jun 2017

Hard tennis courts - generally macadam or acrylic - provide a hard finished surface and are often painted. They are usually the preferred choice at smaller venues, local parks and private homes because of their perceived 'low' maintenance.

However, hard tennis courts become dirty due to airborne elements, debris and detritus that drop onto the courts. If this is not removed, it will start to break down and will contaminate the surface. It also stops the surface from draining properly, which can make the surface hazardous in wet conditions.

You can prevent problems occurring by regularly cleaning the surface (on a daily or weekly basis) with a combination of blowers, brushes and vacuums. If you do not carry out preventative maintenance, you must then react to the resultant problems that are more difficult, intensive and, therefore, more expensive to resolve. 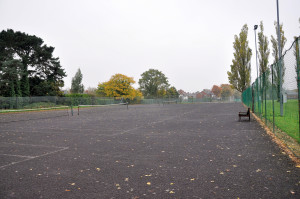 Preventative maintenance is always the most important type of maintenance but, as already mentioned, non-natural courts are assumed to require either low, or no maintenance! This is very evident with new installations because the surface looks all sparkly and new. Because of the newness, they tend to be neglected and left with nothing done until they begin to deteriorate and problems crop up. By this point, the damage has already been done. Although a surface will never look as good as it does on day one, the aim is to look after it with regular routine maintenance to keep it looking and performing as good as it can.

If the preventative maintenance is not conducted, or conducted frequently enough, you will find that contamination will build up within the surface - all the dust and detritus (leaves/twigs that may drop onto the court) will start to decompose, break down and accumulate in the crevasses of the surface.

This contamination will then start to clog up the surface, which means that the courts will not drain as well and a dirty/muddy residue is left on the surface.

From this, you ultimately start to get vegetation growth appearing on the surface - moss and algae are one of the biggest problems found with both hard and carpeted courts - and will grow and spread, in the right weather conditions, very quickly. 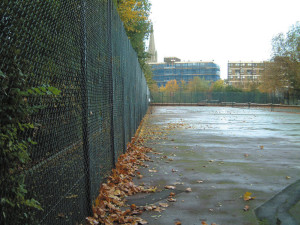 Once this problem appears, it shows that the preventative maintenance has not been effective enough and now you must react to it. If you catch it early enough, this could entail conducting some more specialist maintenance, such as an initial chemical treatment to kill off the plant and growth, before utilising a system of rotary brushes or vacuums to try and brush out the moss and the algae.

If it has been left to really proliferate and spread, the only real option to look at on a hard court is to call in the professionals; for example, Replay offer their AquaCourt process. This process is a type of power washing of the surface to remove the detritus and vegetation, and uses a similar principle to an athletics track cleaning process, but is specifically for hard tennis courts and involves a pedestrian machine that uses water jets.

It will take about a day to clean a whole court using this process. After cleaning, the surface will be restored to an 'as new' condition and the team can then look into putting a preventative maintenance programme in place.

As an aside, the paint that is used on a hard court will contain an agent to give the court slip resistance. This can start to wear off over time through play, maintenance and general weathering, particularly on the service and base lines, where it will receive a lot of agitation by players moving around. Therefore, every four or five years the courts will need to be repainted.

As a general point, particular attention should be paid to the perimeter area and the net lines, as this is where problems start to take hold - these areas don't get played on and don't get worn, so they stagnate, allowing moss and algae to quickly grow and spread.