0 The Long Hard Road To Harrogate 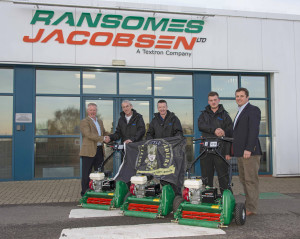 Four intrepid greenkeepers left the Ransomes Jacobsen manufacturing facility in Ipswich early today at the start of 207-mile walk to Harrogate in North Yorkshire, with the added complication that they will be pushing mowers built at the factory.

The team of Mark Hillaby, Gordon Irvine, Tim Johnson and David Steventon are walking to Harrogate to raise funds for Scotty's Little Soldiers, a charity dedicated to supporting the children of men and women killed while serving in the British Armed Forces.

They are hoping to beat the amount raised from a similar walk last year, when they trekked across the north of England from Liverpool Docks to Hull Docks on their Port to Port Challenge, which raised over £2,500 for the British Forces charity, Help The Heroes.

If all goes to plan, the conclusion of what is sure to be a gruelling walk is planned for 11am on Tuesday 21st January on Ransomes Jacobsen's stand at the BIGGA Turf Management Exhibition (BTME) in Harrogate, the largest trade show in the UK dedicated to equipment used for maintaining golf courses and organised by the British and International Golf Greenkeepers Association (BIGGA).

Tim Johnson, a greenkeeper at The Wilmslow Golf Club in Cheshire and organiser of the walk said,
"Lots of people these days do charity cycles and marathons, but we wanted to do something quite unusual and memorable and also related to our industry. One morning I was cutting the greens at Wilmslow and I came up with the idea of a mower-based charity challenge. A few friends and family agreed to support us and it was on.

"This year will be much tougher. The route is 80 miles longer than our Port to Port Challenge, with less hours of daylight and in the depths of winter. We are expecting snow, sleet, gales and sideways rain. Ransomes Jacobsen has done a great job in supporting us and we're hoping to attract other industry support as well."

Scotty's Little Soldiers was set up by Nikki Scott after her husband Corporal Lee Scott was tragically killed in Afghanistan in July 2009, leaving behind her and their two young children. All donations, large or small, will be gratefully received. To donate, visit www.bmycharity.com/HardRoadToHarrogate