by Louise Challiss
in Aeration, People, and Machinery & Mechanics
on 29 Apr 2020

0 The man behind the machine

Designed to relieve compaction, improve drainage and revitalise growth, the OxyShot was introduced into the Charterhouse Turf Machinery portfolio at BTME 2019. It was a long road to Harrogate though for the machine's creator, Peter Knight, who spent 10 years converting the concept of the OxyShot into a reality… 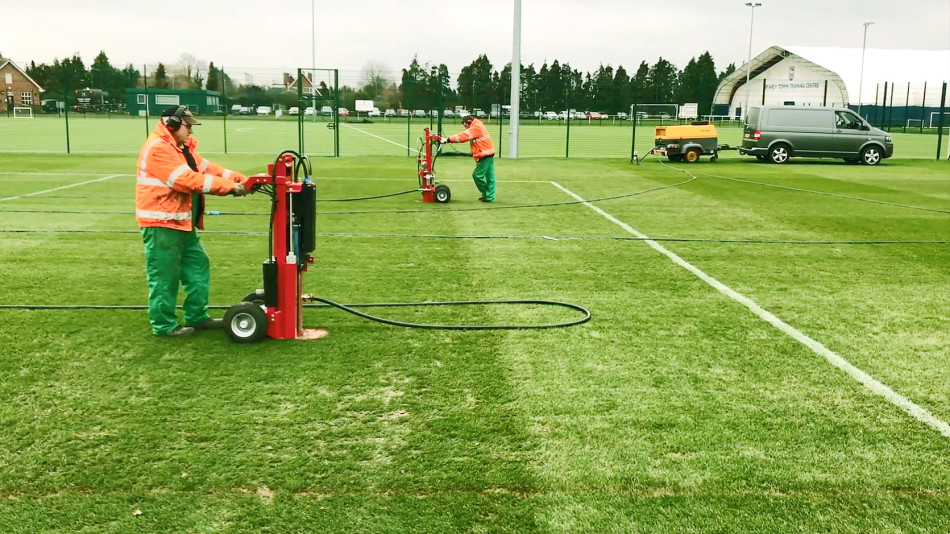 Peter is a well-known name in the field of sports turf maintenance and construction. He established his company Bury Turfcare in 1988, and over the years has kept abreast with the tools and techniques required to keep playing surfaces first-rate. "When it came to the spot-treatment of heavily compacted soil, the go-to machine was always a Robin Dagger" says Peter. "I was regularly out contracting with the Robin Dagger, and it was a popular machine with groundsmen and greenkeepers across the industry."

"While everyone who used it agreed it was a brilliant machine, it wasn't without its problems! The noise of it deafened you, the emissions from the petrol-driven engine nearly choked you and the vibration of the unit nearly killed you! It therefore wasn't a massive shock when it was removed from the market for Health and Safety reasons, however, a machine to conduct the same job never emerged into the market to fill the gap."

"I spoke to a number of people who agreed there was definitely a gap in the market for a new air-injection machine, so I used the concept of a product that worked but went back to the drawing board for a completely new design. One of the main elements was to run the OxyShot purely off a large compressor, eliminating the need for electrics to reduce the risk of failures. The very first version of the OxyShot was pieced together in my shed, from various parts and components from other machines. I took this from engineer to engineer before I found someone who could invest the time, taking it piece by piece, to create bespoke components which would go on to form the very first prototype. It was then that Charterhouse Turf Machinery, and their parent company Redexim, became involved and suggested modifications that my engineer could work with."

"It was all a massive learning curve, from understanding how to make the machine perform as I wanted, to sourcing all the necessary certification… 10 years of blood, sweat, and at times, tears. But the combination of my hands-on experience as a contractor, Redexim's manufacturing know-how and the expertise of the engineer proved to be the perfect mix."

The end result is a unit that uses a single 25mm probe to inject air into the soil in four directions, at a pressure of up to 110psi and to a maximum depth of 500mm (20"). It can also be fitted with an optional 14mm probe, to reduce the working depth to 250mm. It lifts, expands and de-compacts the ground, without the need for chemical applications. 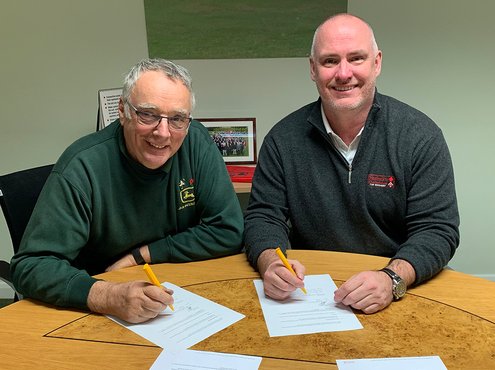 Over at Ipswich Town Football Club, Grounds Manager Ben Connell has already experienced first-hand the benefits of the OxyShot. He explains, "Despite aerating with solid tines throughout the season, and into the lead-up to the wet winter, we had some problems with waterlogging on one of our academy pitches. I called Peter, who deduced there was a pan layer at a depth of roughly 400mm causing these areas to hold water. As the OxyShot can work deeper than regular aeration work, he brought the unit in to shatter the pan layer and since then, this area has been free-draining."

So impressed with the results, Ben had the Oxyshot back a few weeks later to carry out air-injection on another problem area. "We worked on an area roughly 10m2 and the results were fantastic. We had some really significant rainfall throughout the winter and while some surrounding areas were very wet, the test patch was free-draining and clear of any puddling. Months later and we're still seeing the benefits of the work, with no compaction to report."

The OxyShot was also recently hailed a saviour for FC United of Manchester, after it enabled a fixture to be played just 48 hours after the pitch was deemed to be unplayable. The relentless heavy rainfall we experienced at the beginning of 2020 meant that many Grounds Managers, including Graham Byrne, were unable to conduct any decompaction work which left the club with no option but to cancel valuable fixtures. One visit from local contractors Bancroft Amenities Limited and their OxyShot air injection unit saw things swiftly back on track.

"I was aware of one particular area, a goal mouth, that was displaying signs of reduced drainage capacity for some time" explain Graham, who has overseen the pitch at Broadhurst Park since it opened five years ago. "In a normal season, we would call on Bancroft's to come in and conduct some aeration work to relieve this compaction and improve drainage - but the weather has meant this isn't a normal season! The ground has been too wet and soft to get anything onto the pitch."

The OxyShot being small and lightweight was able to be used, with the tractor and compressor, left on the side-lines. "Bancroft's came in shortly after Storm Ciara in February with the OxyShot, which effectively shattered the compaction to improve the drainage down through the profile. There's no denying that if we had not brought the OxyShot in, the game would have been postponed and that would have been critical income that we as a non-league club just cannot afford to lose."

Graham says, "Since the OxyShot work was conducted, we've noticed the ground in the affected area to be firmer and surface water is no longer gathering. It's an outstanding machine, and we must say thank you again to Bancroft's for their help in our hour of need."

Its multi-purpose nature has seen it become a staple on the hire fleets of dealers and contractors up and down the country. One of the first dealers to add the OxyShot to their hire offering was Lister Wilder. "We purchased our first unit back in August 2019" explains Hire Operations Manager, Steve Potter. "Charterhouse presented the machine to us and because of it's unique operation and the lack of similar machinery in the market, we were keen to be able to offer the machine into the hire market. It was a learning curve for all involved, but it wasn't long before we were able to demonstrate the machines full potential when installing thanks to the support of both Charterhouse and Bury Turfcare." 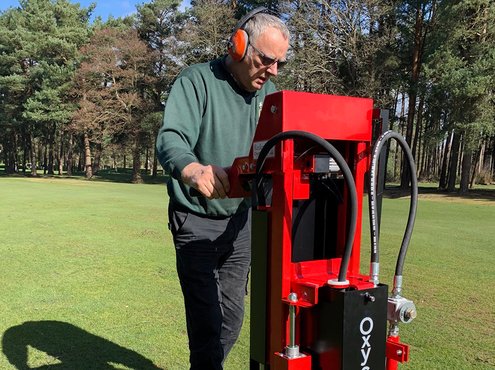 Their predictions on the popularity and demand for the OxyShot came to fruition which saw Lister Wilder add a second unit to their hire fleet in January 2020 - just before the worst of the wet weather hit golf clubs and facilities up and down the country. "Roughly 90% of the demand we've seen is from golf courses, who will take the OxyShot on hire for a week to relieve compaction on greens and tees. Because there's no other machine at the moment that can work to the depths that the OxyShot can, and instantly removes any standing water, it's been hailed miraculous for those clubs that have exhausted all other avenues of dealing with deep compaction."

Goring and Streatley Golf Club are just one of those to take advantage of the OxyShot from the Lister Wilder Hire fleet. "We had the OxyShot in for a week, following the end of the 2019 golf season" explains Course Manager Matt Aplin. "While we regularly conduct aeration across the course this is limited to a depth of 10 inches. We've used other air-injection units in the past, but the OxyShot goes at least 20cm deeper than any other piece of equipment I've used."

Matt used the OxyShot on all 18 greens, and a couple of specific problem areas. "Because of its working depth it shattered a pan layer that we have previously been unable to reach. This meant that, despite what was one of the wettest winters on record, we did not have to close the course at any stage. We also didn't have to bring any of our temporary greens into play, which we have has to in previous years due to compaction on a couple of problem greens. This work will now become a regular fixture in our maintenance calendar."

The OxyShot is distributed exclusively throughout the UK by Charterhouse Turf Machinery. Nick Darking concludes, "When Peter first presented us with the concept of the OxyShot, I and the team knew he was onto something. Having been the last company to import the Robin Dagger, we at Charterhouse were well aware of how important that type of trouble shooting, deep aeration was to customers across both golf and sports turf and how, since it was taken away from the market, no machine had been introduced to fill that void. Nearly 18 months on from its launch, the OxyShot has proven itself to be a fantastic addition to our aeration portfolio and has clearly demonstrated its true potential throughout the wet winter of 2019/20."