Warwick Racecourse has certainly played its part in the history of horseracing - most notably when it became the first course to include a jump race in its programme, establishing National Hunt racing as it is known today.

Racing in Warwick can actually be traced back to as early as 1694, when the sport was introduced to the market town in the hope of attracting wealthy professionals to help rebuild the areas fortunes after a devastating fire. The inaugural race at the course was held in 1707, but another 102 years passed before the first stand was opened, at a cost of £800, parts of which remain today amongst the later developments.

The most famous name to grace the course was the legendary Red Rum, who ran once over the flat in 1967 - the same year that jockeys complained the track was the worst they had ever seen, and called for racing to be abandoned after some horses sank into the mud by over a foot!

Warwick hosts races all year round, with twenty-two fixtures under both codes of flat and jumps. The most valuable race run at Warwick is the Totesport Classic Chase, which is run on the second Saturday each January over three miles and five furlongs,

The other main jumps feature is the Kingmaker Novices Chase Day, a festival trial meeting that takes place in February and provides excellent clues for the 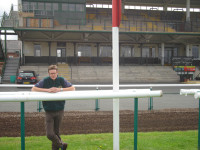 The Clerk of the Course is Andrew Morris, who is also in charge of Huntingdon Racecourse. The groundstaff team at Warwick is led by Head Groundsman, Nick Edwards, who recently joined Warwick from Newmarket Racecourse. He has four assistants.

The racing surface is fifteen hectares with separate National Hunt (9 hectares) and flat tracks (6 hectares), which are treated and subjected to separate maintenance regimes. The sward is a mixture of ryegrasses and meadow grass. A recent visit from Steve Gingell from the STRI showed 70mm of sand improved soils with firmer clays underneath. The flat course has no drainage and the National Hunt course has only a small area of drainage located between the last two fences in the back straight.

The flat course is used between April and early October and, during 2011, will have thirteen fixtures on it. In particular, Warwick has a number of fixtures in close proximity during May and again in June and July. The regime is, therefore, based upon ensuring the track looks at it best for these fixtures.

Starting in early spring, the flat course is harrowed to remove any dead grass or thatch build up - if needed, the pulled out material will be brushed and collected. It is then overseeded using a hired Moores Uni-Drill with Barenbrug Bar 7 seed. Worth Draining will then vertidrain the entire course and, finally, it will be fertilised ready for the first meeting of the season.

Repairs will be carried out using a 70:30 sand to Norfolk fen soil mixture supplied by Banks Amenity.

The track is cut using the Hayter R314 and, during spring and autumn, is cut at 100mm. During the racing season this is raised this to 120mm.

The track will be aerated during the season every week using their own Verti-Drain 7212, SISIS Mega Slit or SGG Airone Aerator. In addition to this, the bend into the home straight is always spiked with the Airone on the morning of racing. The running lines will also be overseeded as required during the fixtures.

This course is raced on between November and March. As there is a very narrow track by the end of the season, there is limited grass cover and a very compacted soil profile. So, the first objective is to decompact and improve this. This is done by 'earthquaking' the soil, and then leaving it to crack with no irrigation added, which is found to allow the clay soil to restructure. The track is overseeded with Barenbrug Bar 7 and cut at 100mm for the spring, summer and a

This is carried out using a Briggs 30m boom. Warwick has its own reservoir, and an abstraction license to fill the reservoir with water from the Gog Brook, which runs alongside the outside back straight of the flat track. A new 5" ring main was installed by D W Clarks in 2007 at a cost in excess of £60,000.

What's in the Warwick shed?