0 The next chapter for Toro Lynx 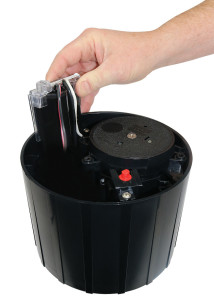 Toro's new Lynx Smart two-wire System is an adaptation on the already successful GDC control system controller. Visitors to BTME were given the first viewing of the system with its Lynx Smart Module and Smart Hub which provide the flexibility of a satellite controller with the cost savings of a two-wire system.

Based on decades of engineering experience from Toro to deliver high speed diagnostics using rapid two-way communications, the Lynx Smart two-wire system is an adaptation on the already successful GDC control system. It's a backwards and forwards compatible add-on tool which provides backup and operation should connection to the central control be interrupted so irrigation continues.

But that's not all. It comes with attachments to expand the capabilities of the Lynx central control system to another level. The Module makes irrigation smart - add it to a GDC system, for example, for extra precision and speed.

Meanwhile, the pedestal or wall-mounted Smart Hub enables the system to be segmented into manageable areas by strategically placing up to nine Smart Hubs over the site for simplified maintenance. This allows for in-field manual operation or troubleshooting and creates a convenient point of connection for the soil, flow and status sensors.

Robert Jackson, irrigation field sales manager for Toro distributor Reesink Turfcare, explains more: "These products certainly demonstrate that just when you thought Toro's Lynx central control system couldn't get any better, Toro does what it does best and innovates.

"The Hub controls up to 1000 sprinklers. It comes with 20 percent lower installation costs and is ten times faster than other two-wire systems in reducing diagnostic test times. Plus, it's available in either hard wire format or digitally for communication between the Lynx controller and Smart Hub to offer the possibility of further reductions in cabling costs."

Rob continues: "All of these features are coupled with the option to integrate with pump systems and weather stations to allow instant and 'real time' adjustments to irrigation programmes in the event of pump issues or weather events that require application changes."

The Lynx Smart Module can be updated with a single click meaning course managers will always have the very latest innovation and benefits as soon as they're released, and the handy bar code app puts faster installation and replacement in the palm of your hand quite literally.

This means course managers can reduce downtime, optimise efficiency and, Robert confirms, make significant savings: "Management, maintenance, installation and operation are all easy with the Smart System thanks to increased control. Because you can control sprinkler run times to within plus or minus a second you get exactly the right amount of water precisely where it's needed. Just imagine running 1000 sprinklers at 80lpm for just 30 seconds less - that could save about 40 cubic metres a day and considerably reduce power consumption costs in relation to pumping systems!"

The fact that it's equally as well suited for sites under construction or those which have yet to update means everyone can benefit from the Lynx two-wire system and its attachments.

Lynx Smart two-wire System debuts on the Reesink Turfcare stand alongside the ever-popular Lynx central control system, with Infinity, Flex, T5, T7, Flex B Series and the 590G sprinklers with precision rotating nozzles, all from Toro. And from Otterbine, the Fractional five-in-one aerating system and the C3 Concept 3 aerating fountain.