Preparations for the coming Open began soon after Troon had hosted the 1997 event where Justin Leonard lifted the Claret Jug. Throughout that time the Club have been able to rely on the support of STRI, working as Official Agronomists to the R & A Championship Committee to ensure the golf course used for the Open is in excellent agronomic condition. Alistair Beggs, STRI's Northern Area manager and R & A Agronomist, has been working with Billy McLachlan (Links Manager) and outlines the changes and preparation for the coming Open. 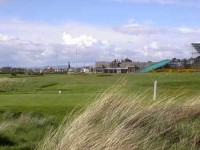 The Club is justifiably proud of it's link with The Championship, having hosted it on seven previous occasions. Troon (without its Royal accolade achieved in its Centenary of 1978) hosted its first Open in 1923 when Arthur Havers won The Championship. The course measured 6,583 yards in 1950 when Bobby Locke was favourite and triumphed by 2 shots from Roberto de Vicenzo in a field lacking American participation. The Americans had returned in force by the time Arnold Palmer won in 1962 by six shots from Kel Nagle. Norman Fergusson the Head Greenkeeper at the time famously retells a story that the greens were cut twice that week at a height of 6mm (1/4inch). Nobody complained about the speed!

When the Open returned to Troon in 1973 all the talk was of a young chap called Johnny Miller who had just taken the US Open by storm. However storm strewn Troon was mastered by Tom Weiskopf in an Open famous for 71 year old Gene Sarazen's hole in one at the Postage Stamp.

In 1982 Tom Watson was the man to beat. Already a three-time winner of the Claret Jug he came to Royal Troon having just won the US Open at Pebble Beach. However it was Bobby Clampett, another resident of Pebble Beach, who almost ran away with the Open before rounds of 78 and 77 and a final day collapse by Nick Price allowed Watson to win for a fourth time.

The world number one Greg Norman led a strong field in 1989. The course was baked hard and the course played like a true links should. Norman figured strongly throughout but short game heroics by Mark Calcavecchia led to the first four hole playoff in Open history and victory for Calcavecchia over Norman and another Australian Wayne Grady.

The weather was hot and dry again in 1997. Norman Fergusson the long time Head Greenkeeper handed over the reins to Billy McLachlan who completed a fine job and prepared the links to a first class standard. However Mr McLachlan was now mowing the greens nearer 3mm (1/8inch) and twice a day! In 35 years mowing technology had changed dramatically and the demands of the modern game were such that the pace of the greens had become one of the most important factors in the preparation of the course. Thanks to the greenkeeping team the greens were true as well and Justin Leonard triumphed with some excellent putting in a close fought battle with Jesper Parnevik.

Preparations for the coming Open began as soon as the last one was over. Particular efforts have been made to strengthen the botanical composition of the putting greens by reducing proportions of annual meadow grass (Poa annua). This is a slow process and although some progress has been made it is not yet complete. Efforts have also been made to improve the firmness of the greens by concentrating on a variety of aeration initiatives and through making subtle changes to top dressing programmes. The aim of all of these exercises is to enable the preparation of a true links test with greens that are smooth, firm and naturally well paced.

New tees have been introduced at the 1st, 6th, 11th and 15th holes as part of a joint agreement between the Club, the R&A and golf course architect Donald Steel. Not only do these tees mean that the length of the course has now been extended to 7,175 yds (Par 71) but in the case of the 1st and 15th the line of play has also been markedly altered. The new tee at the 1st is a particularly exciting addition. Furthermore the new tee at the 6th hole will make it the first par five in Open Championship history to exceed six hundred yards. The new hole measures 601 yards.

The position of bunkers has also been reviewed and a total of 10 new hazards have been introduced at the 1st, 2nd ,4th , 7th and 16th holes making a grand total of 93 on the course. All bunkers have been revetted as part of the ongoing bunker management programme with 48 bunkers having been tackled in the winter prior to the Open. This includes the bunker to the right of the landing area on the 18th hole which has been heightened.

All course management practices are undertaken with respect for the environment and knowledge of the importance it plays in the challenge that is Royal Troon. Fertiliser, water and chemical usage are strictly controlled and turf management is integrated with wider landscape management, waste management and nature conservation to deliver a high quality product. This approach is supported by the recent production by the Club of an Environmental Management Plan covering both turf management and ecological issues. This incorporates many of the Best Practice directives promoted by the R&A through their website (www.bestcourseforgolf.org). The best golf courses inherently exist in wonderful natural environments and Royal Troon is no exception. The scene is set for another fabulous week on one of Scotland's most historic courses.