0 The pressure was on for the 2019 Tour greenkeeping team

Some of you will have enjoyed the Tour Championship at East Lake Golf Club, Atlanta over the weekend. But, with the tournament being bought forward from the third week of September, the pressure was really on for the greenkeeping team. 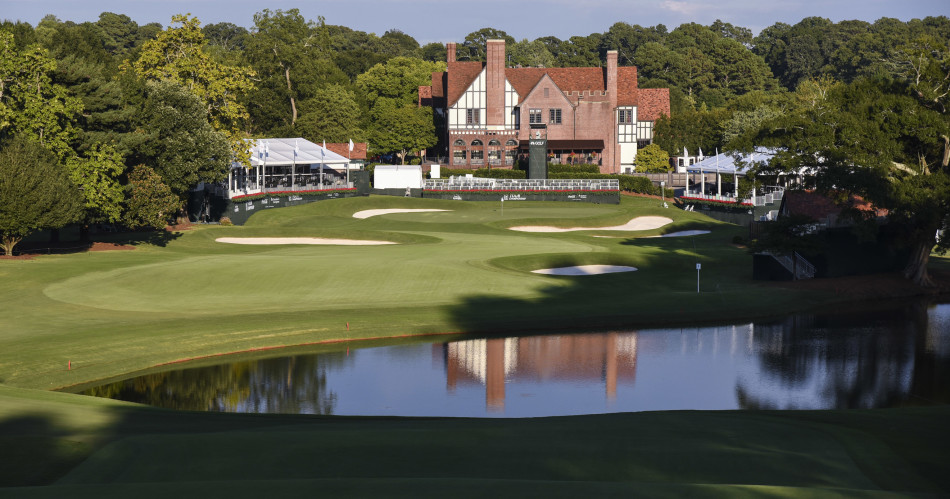 "Our biggest goal is to make sure we meet our standards and expectations and are satisfied with our product come tournament time, with the change in date," says Charles Aubry, superintendent at East Lake.

Aubry says it wasn't difficult to wrap his head around the date change, but knew it was going to be a learning experience in the 11 months between the end of the 2018 Tour Championship and the start of the 2019 Tour Championship. He says once the crew gets through this first year, the expectations will be better for next year.

According to Ralph Kepple, director of agronomy at East Lake, "losing one month feels like we lost two."

The turf isn't too upset about the change in date. The bermudagrass greens at East Lake like it hot, dry and sunny, so if the weather cooperates, Kepple is hopeful for healthy, tournament-ready turf by the end of next month.

Video above: Ralph Kepple, director of agronomy, and Charles Aubry, superintendent, of East Lake offer a look at what the lead up to the Tour Championship looks like and how the team combats the stress.

The tournament is being held in August for the first time after the PGA Tour shifted the schedule in 2018 to better highlight the majors in their own specific months. The Tour will now culminate with the Tour Championship at the end of August.

"If we're going to have a tournament in August (in Atlanta), we definitely want it on bermudagrass greens," he says. "It's a pretty good time of year for us, we're able to provide a healthy rough and should be able to provide healthy greens. Everything is growing really well in August. Almost too well."

Though the golf course benefits from the heat of Georgia in August, the spectators may not, he jokes. However, the PGA Tour will have additional cooling stations to help spectators beat the heat, and there is plenty of shade throughout the course to keep them comfortable.

Aside from the potential discomfort of attendees, Kepple also is wary of the weather. August in Georgia means hot, humid weather that breeds thunderstorms. And with thunderstorms come delays and damp playing conditions.

However, neither Kepple nor Aubry can control the weather, so they've just got to prepare and hope any thunderstorms hold off.

Kepple says the prep this year isn't a whole lot different from past years, they've just had to change their timing. Prep for the Championship began on July 1, about seven weeks before the tournament.

"In that time period, it's just about hitting our marks with topdressing and verticutting and getting the texture of the greens dialed in," Aubry says. "Starting to jump on top of details of the course, adding fertility in some of the areas we may need a little thicker or to play a little more stout."

The crew lays out a program on the calendar that works back from the first Monday of Championship practice rounds. After that, Aubry says, it's just making sure the crew finishes every one of those things within that time frame.

This year, along with having to be prepared for the tournament a month earlier than they're used to, Aubry and Kepple face the added challenge of being down a few crew members.

They are supposed to have about 36 crew members, but currently have only 25. They are hopeful they can at least get that number up to 30 before August hits. "Like everyone else, we're having trouble finding help," Kepple says.

Luckily, during the week of the tournament, the course gets a lot of volunteers who lend their services to the crew. This year, East Lake is slated to have about 75 volunteers, many of them from all over the world, including Ireland, England, Sweden, Spain and Abu Dhabi.

Aubry says the volunteers do everything from mowing greens, tees and roughs to raking bunkers, while a few staff members are assigned to specific detail-oriented jobs that require the eye of somebody on the property, like mowing fairways and cutting and changing cups in the morning.

Video above: East Lake Golf Club's Charles Aubry and Ralph Kepple explain what the volunteer crew looks like for the Tour Championship and how they work as a team to get the course ready.

The crews and the volunteers primarily use John Deere equipment. According to Aubry, they use pretty much everything, including 180 and 260 walking greensmowers, 2500 triplex mowers, 7700 fairway mowers and several Gators.

East Lake has had a relationship with John Deere since 1995, and according to Kepple, the company even joined the club as a corporate member.

"I am able to pick up the phone and call people at Deere," Kepple says. "If I have an issue, I can call and talk to someone and they are going to listen and typically try to find a resolution to a problem for us."

The course closes for 10 days to prep for the tournament, and this year John Deere and Greenville Turf and Tractor - the dealer East Lake works with - will provide the course with some extra equipment during the closure and a few pieces for a renovation project that is currently underway.

The last time East Lake did major renovations on the course was 2016, but there is some work going on at the course this year.

The changes don't affect tournament play, Kepple says, rather it affects the hospitality layout during the tournament and what the course is able to do with its own experiments. Crews rebuilt the 100-yard practice areas and moved the nursery green 140 feet.

This gives the tournament more space in its hospitality areas, and allows the course to build a green with five varieties of grass for future renovation. John Deere lent a couple of greensmowers to the course for the project.

East Lake hosts the Tour Championship each year, so each year it has an opportunity to evaluate its performance and see what it can do better.

"We put pressure on ourselves to try to make it better every year," Kepple says. "Everything is on the table. We just look at everything we can."

The team's goal after each tournament is to do a review and search out improvements. According to Kepple, the 2018 tournament was "pretty darn good," which made it challenging to find something to improve on for 2019, but it can be something as seemingly simple as finding a better way to rake bunkers.

"They were good last year, we had no issues with bunkers, but there may be a different way we can rake them to make them much better, or a different way to prepare them going into the tournament."

Never resting on its laurels seems to work well for the East Lake crew. According to Kepple, players always seem pleased with the course and the way it plays, making it an ideal location for the tournament year after year.