0 The stage is set as London Prepares 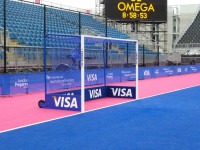 The Visa International Invitational Hockey Tournament will be watched by over 60,000 spectators and used by the London 2012 Organising Committee of the Olympic Games (LOCOG) to test key operations ahead of this summer's Games, including tests on the field of play, video referral, timing, scoring and pitch equipment which has been supplied by UK Leading Sports Equipment Manufacturer Harrod UK.

This unique event, which is taking place at the state of the art Riverbank Arena, Olympic Park from 2-6 May, will feature Great Britain alongside some of the world's top teams including Australia and Germany in the men's competition; and in the women's event current world champions Argentina will be in action.
Huge 'interest' has been shown in the Harrod equipment from visiting teams and officials alike, with new designs on show for the very first time such as 'London Blue' Hockey Goals, Team and Official's Shelters and a unique range of hockey storage equipment.

"A home Olympic Games will only happen once in most people's lifetime" explains Sales and Marketing Director Les Saunders. "To have the opportunity of showcasing our company, equipment and capabilities at this level is simply fantastic"