0 The Strato-charged engine from Komatsu Zenoah

The Strato-charged engine from Komatsu Zenoah 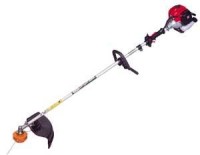 Japanese manufacturer Komatsu Zenoah recognised some years ago the rising demand for low emissions and improved economy in a two-cycle engine and set about designing a new range of two-strokes that would not only meet but also exceed expectations from this type of unit.

The result was the Strato-charged two-stroke engine.

This new concept was the first small two-stroke engine to comply with the stringent California Air Regulation Board (CARB) rules, without a catalytic converter. The engine retained all the advantages of a two-stroke in terms of high power to weight ratio, simple construction and low cost, but the new Strato-charged concept was also a staggering 30% more fuel efficient than conventional engines and reduced hydro carbon emissions by an amazing 73%.

Fresh air, which flows into the cylinder from the air inlet port, expels the burnt gases so the mixture gas isn't exhausted and is used effectively for the next firing. The newly designed chamber and spark plug positioning ensures highly stable combustion without misfiring and an exhaust 1/3rd cleaner than the previous levels.

So successful has this innovation been that Komatsu Zenoah have now introduced a Strato-charged engine across their entire range including chain saws, brush and hedge cutters plus blowers.An added advantage is an innovative air cleaner design that traps the dust but is difficult to clog, so less downtime is encountered with longer periods between servicing.

The cost savings for fleet users of Strato-charged powered machines are considerable.

A 25.4cc Strato-charged unit is also fitted to a short reach hedgecutter and hand held blower, as well as a professional quality brush cutter.

A backpack blower, the EBZ4800 has a 47.9cc Strato-charged engine and is said to be the quietest unit of its type available anywhere.

Komatsu Zenoah products are distributed in the UK by Allen Power Equipment Limited and all enquiries should be made to 01235 515400.