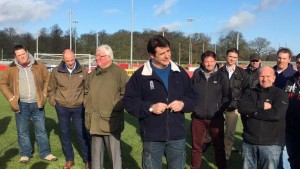 The unsung heroes of first-class cricket - the groundsmen who produce the surfaces on which the game is played - were treated to a couple of days at the FA's National Football Centre at St George's Park in Staffordshire this week.

The 330-acre site was chosen for the first time as the venue for the annual pre-season meeting and conference of the groundsmen and the ECB's Pitches Group - with the cross-fertilisation of ideas continuing as speakers included Neil Stubley, the head groundsman for the All England Lawn Tennis Club at Wimbledon.

"But we also try to provide them with some different perspectives, and this year they included Neil Stubley from the All England Club and also Alan Ferguson, whose role as head groundsman at the FA takes in Wembley as well as St George's Park - and who also gave us a tour of their new facilities. I was blown away, and I think that was a common reaction."

"All first-class groundsmen come under huge pressure during the course of the season, so hopefully it was enlightening for them to hear from Neil and Alan in terms of precision, attention to detail - and having no margin for error. The fields of play may be different, but there are many common areas where we can assist each other, from pitch management, equipment, innovations and research."

"We also heard a presentation from David Bates, the managing director of Total Play, who are one of our most important partners in the recreational game, both in regard to non-turf pitches and in improving squares."

"David has worked with me on our research into providing training facility surfaces conducive to spin at the National Performance Centre in Loughborough, and we were also given an update from Dr Iain James of TGMS, one of the country's most respected soil scientists, on the research that has been commissioned by the ECB into spin."

"Our executive board gave the go-ahead last year for a sizeable investment providing new equipment for county groundsmen to test the hardness and moisture of their pitches, and we are now starting to collate some data results from that.