by Val Graham
in Machinery & Mechanics, Rugby, Cricket, Football, and Golf
on 22 Jun 2018

Sports administrators are closely watching a revolutionary project which if takes off has potential to be rolled out country wide. 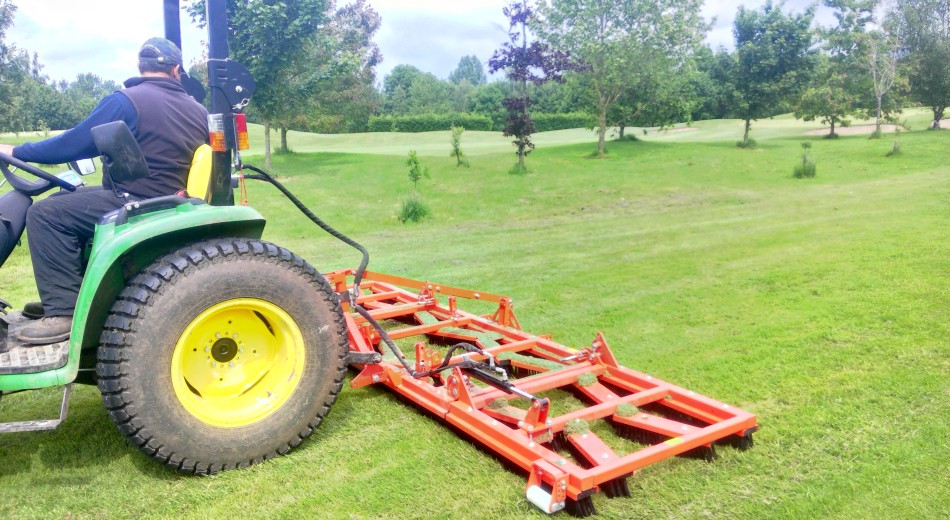 The 'machinery bank' with eight pieces of maintenance equipment will potentially assist hundreds of eligible sports clubs in a 20-mile radius of Thirsk. Qualified greens staff will carry out the work at affordable rates.

The joint project has been co-ordinated by Ian Powell, Regional Pitch Advisor for the North East & Yorkshire.

"Essentially it's a mechanism to help least resourced club teams play on a better surface for more of the playing season. But it's not just for golf; football, rugby and cricket can all get a boost," confirmed Ian Powell.

"It's radical because conventional thinking has been turned on its head. It's not one contractor or a club that's behind it. Guided by consultants, Sporting Assets, who have considerable expertise in the area of community sports funding, they advised a company limited by guarantee was set up to run the scheme separately from the golf course. The new company is called Hambleton Sports Improvements after the district where it operates. The solution is a win-win for everyone playing on natural turf locally."

"Decompaction, overseeding, spraying, scarification and fertiliser applications are what's most required to rejuvenate an existing surface, "continued Ian Powell. "It's about getting versatile kit, suitable for routine maintenance at different levels of sports clubs which also withstands the rigours of golf course duties." 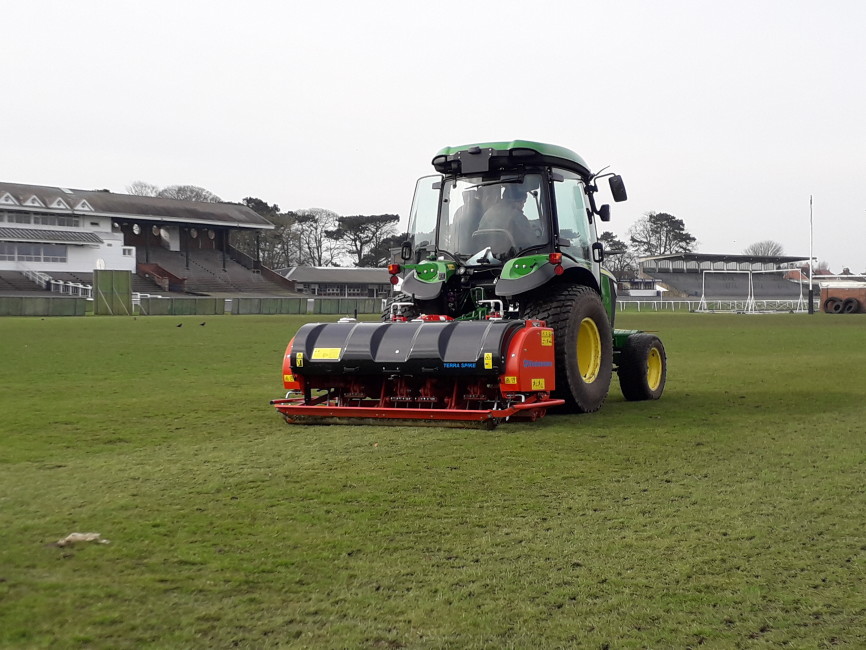 "With this in mind, the equipment purchased includes a John Deere 4066R, a Charterhouse Verti Quake, a Star Green sprayer from Vale Engineering and from Wiedenmann a GXi8 HD Terra Spike, a 2.1m Terra Rake, a Super 500 towed flail mower/collector, Terra Float over seeder and a double sized Terra Brush with folding wings.

"At the heart of the scheme is the greenkeeping team of Thirsk and Northallerton Golf Club led by Course Manager, Roger Mackerell and his deputy, Simon Todd. They are the the project champions if you like. A formal service level agreement is in place which will be reviewed regularly to enable the club to use the equipment on its own course. Initially, from October through to March when grass growth slows down, their focus shifts to general maintenance and renovations with an element of down time compared to the hectic golf season. So, initially in Autumn the roles and skill set of a small group of their team is being expanded to also work on winter pitches and become the labour force for the machinery bank, with potentially more staff added."

Machines are stored and maintained at the golf club

"We're very happy to play our role," said Roger Mackerell. "This has brought an amazing opportunity for our greenkeepers. Not only do they access a wider fleet of machines year round, but their turf knowledge and experience will be significantly enhanced. Tending different types of turf stressed by team sport just broadens their skill set. I'm hopeful that, as more work is commissioned, we'll be able to offer additional greenkeeper apprenticeships It would be really good for the area and the club."

The scheme has been designed for maximum take up.

"We've put a competitive pricing structure in place based on square metreage. If a club has funds to only do the 18-yard box, or the centre circle that's good enough for us. Same goes for rugby or cricket. We won't insist they do low traffic areas just for the sake of it as well. Importantly, the essential areas are treated and that's where improvements will come," continued Ian Powell.

"The first few pilots undertaken to test the system have been so successful that the clubs in question have asked for additional works to include de-compacting of the junior football pitches, spraying and over seeding of their cricket outfield later in the year. We are actively taking bookings. Over the summer we will identify, plan and commit to end of and pre-season work. Any interested party just needs to go on to the Hambleton machinery bank website and fill out an enquiry form, send it back and we will do the rest."

With links through the National Governing bodies, as well as Sport England, a complete data base of hours, type of work as well as costs will be kept and submitted on a quarterly basis for all to monitor and follow for future projects.