0 The John Fretwell Sporting Complex - Tied up in Notts

The John Fretwell Sporting Complex is managed by The Warsop Sporting Trust which is operated by volunteer trustees from the organisations who use the complex. The aim is to maintain the facilities to the highest possible standards and to promote sport in the local community. Helping the cause considerably is Head Groundsperson, Robert Sprigg. 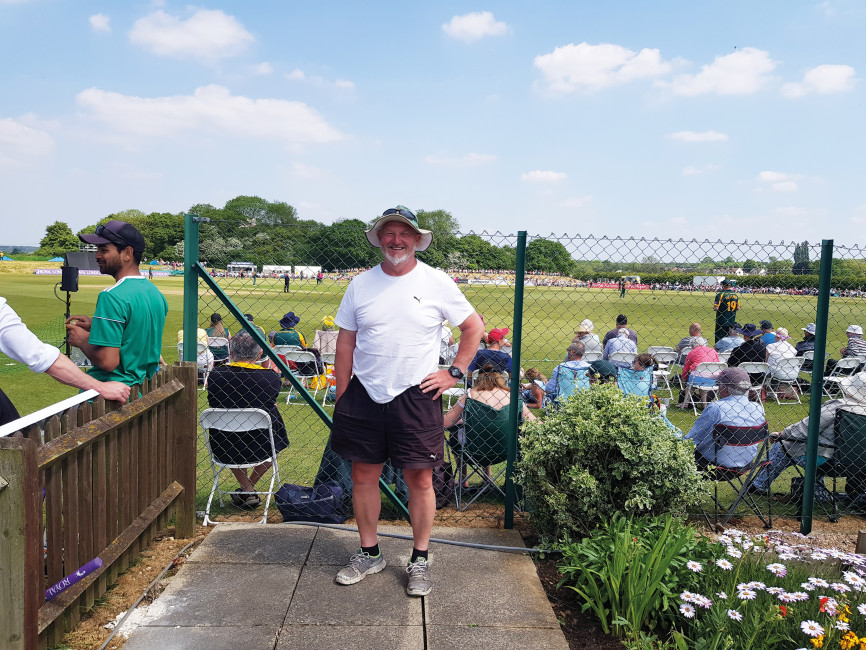 Stars like Ross Taylor, Jake Ball and Ben Duckett were at the John Fretwell Sporting Complex as Northants CCC batted, often-unthreatened, to win away at Notts Outlaws in the One-Day Cup.

Half-centuries from Josh Cobb, Alex Wakely and Adam Rossington looked difficult to end and that solidity proved too much for a slightly over-aggressive Outlaws chase, led by Steven Mullaney, especially with cameos like the Northants number 11 posting a brief, cheeky 180 strike rate.

The Sporting Complex, founded and owned as a community enterprise by local businessman and horse stable owner John Fretwell, is the home of Welbeck Cricket Club, which is Jake Ball's home club.

It caters to cricket, bowls and football, with some of the cricket facilities including an artificial outdoor net area and an indoor net area - this indoor room transforms to cater for weddings and functions when not in sporting use.

The club is considering plans to convert part of its building to an indoor cricket centre to complement the nets already in there.

The fields include two cricket pitches, each with fifteen strips, a bowling green, a six-wicket practice area and four football fields, all over twenty acres, which require 6:30am-4:00pm grounds shifts in summer - and only an hour less during the winter. 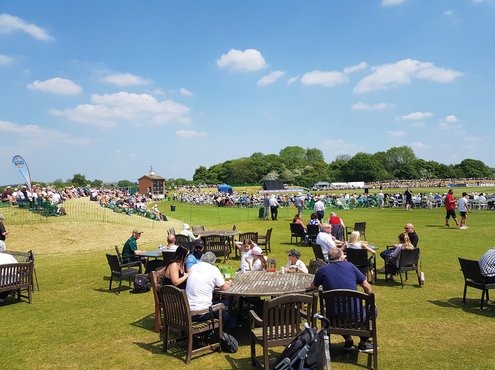 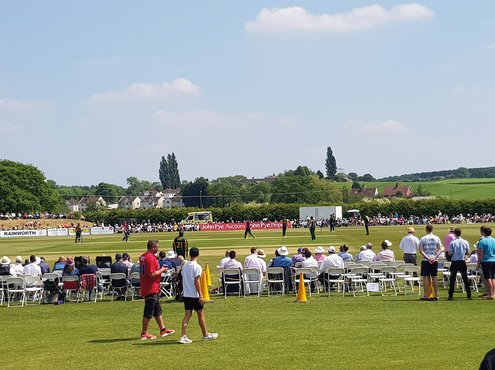 Head Groundsperson Robert Sprigg had only good things to say about John: "He's a wealthy guy, but he's here today. He's been taking tickets and holding the doors for people. He's a very good chap and we call this ground his 'train set'."

It has been used annually as a Notts out-ground for the past five years, always in the Royal London One-Day Cup, although the club's decision-makers seem as though they would be enthusiastic about extending this relationship to include more matches.

It seems this wouldn't be a bad move for Notts, as the venue is fantastic. It has decent-visibility standing room for several thousand, with space for the odd lawn chair or beach towel. There were also a host of premium food and drink vans set up for this county one-day game.

Its eleven year caretaker (since the ground's inception) is Rob, a Notts local, whose grounds career has been somewhat unusual, in that he has spent almost its entirety as a sole-or-head groundsperson, including Mansfield Town FC and Clipston Welfare Sports Ground. He passed NVQ Level 3 via Myerscough College having previously completed Level 2 through Slick Training. And, with an apprenticeship served at Notts County FC, you could say Rob has been around the block.

At 58 years old, this could be his last appointment (although, he didn't say so himself). He has, however, only just stopped playing cricket, his joint-favourite sport, due to a knee injury. 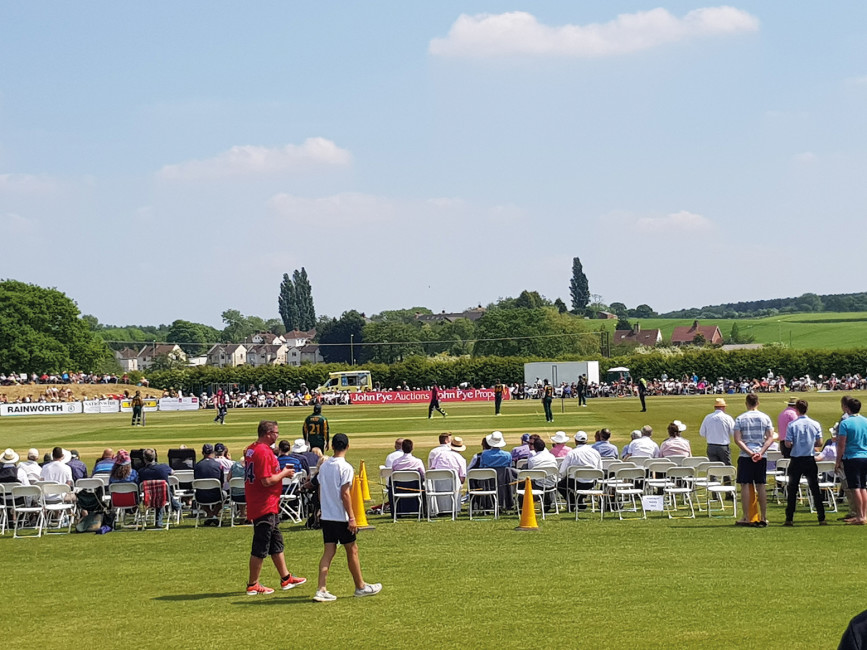 Paul Hunt volunteers at the complex four days per week - every weekday but Tuesday - and also plays for Welbeck. He had worked at their previous ground and committed to continue.

The Welbeck Cricket Club has four teams who play on Saturdays and three on Sundays, five youth teams who play weekly, as well as Notts Ladies CCC, who play twice per month, and the Notts 7-18 age groups also play there.

Thirteen football teams of various team sizes and ages rent the pitches regularly. The bowling green is used every day but Friday.

"Because there's no path around the bowling green, we can struggle with wear at the edges. It's robust enough around here to avoid that being a problem anywhere else."

"We've just had some root and moisture tests done. The roots have gone several inches down on the cricket square and the bounce is up to the ECB's standards."

"It's a couple of years since we had the other soil tests done but, again, everything was spot on and didn't affect our processes."

"When we've used a wicket, we'll water it down, clean the surface, overseed it with a SISIS dimple seeder, topdress it and we usually get a month before we have to use the same wicket again. The teams don't have to train on the square, because of all the practice facilities."

At the time of the complex's build, John decided that it should be self-sufficient and injected large amounts of capital to purchase most equipment which could prove necessary, including a disc seeder, a Verti-drain, a tractor, mowers - triple, bowling green and wicket - and more.

This means Rob can lead his own full renovations, i.e. seeding, topdressing and verti-draining, rather than having to depend on outside agencies.

The equipment is always purchased outright and sometimes brand new. Rob is a fan of Dennis and Allett machinery, calling them both "strong, reliable, good performers". 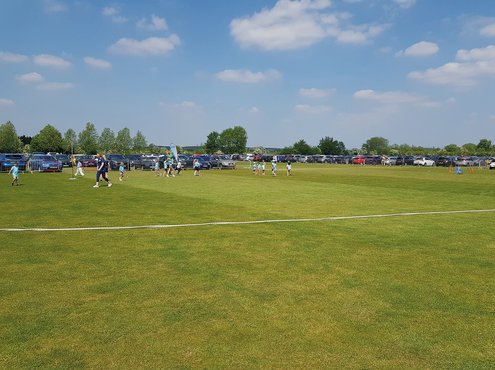 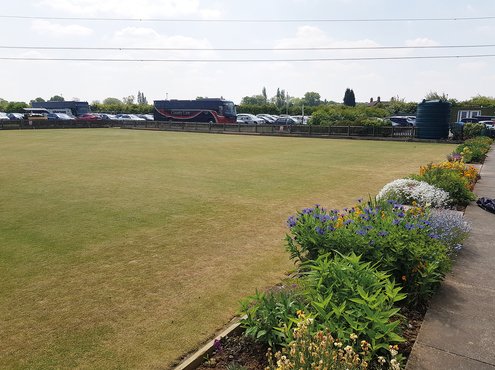 He said his favourite bit of kit is the club's Hayter triple mower, and that he'd like to own, at some point, a John Deere utility vehicle for the outfield.

Rob said: "Basically, it's all clay and, when it rains, it's a nightmare. We spent a couple of seasons introducing a lot of compost-and-sand-heavy topdressing to try to soften it, which helped a lot."

"The wicket itself, though, didn't need a lot doing to it. It used to be a farmer's field before John bought it and the base was put in ready for the construction."

"It had a load of Binder Ongar Loam to cover it, which maintained that useful, bouncy level of clay whilst upping the infiltration rate too. That was compatible. It's all Ongar."

"It's usually a good pitch for both attacks. The ball usually does a bit in the first innings then, in the second innings, it flattens out and you can bat on it. So, hopefully, [he chuckled] Notts will chase down this total [they didn't]."

John has "taken a backwards step", in Rob's words, from running the complex in recent years and delegated responsibility to his brother-in-law, Mark Waterfield.

Rob submits a list of necessities for the year to Mark, as opposed to focusing on the budgeting figure specifically, and neither Mark nor John have ever denied a request.

Being a multi-use facility, these decisions have to come at various times throughout the year: the bowling and cricket plans are made around the end of August; the football is planned in late spring; (naturally, ad hoc duties also exist. For example, they're about to purchase a new watering system).

For the same reasons, the renovations on all sports tend to be spread out. Football has some quick work done around May, with more at intervals with schedule gaps.

Along with a host of other reps who help the team with their agronomy, Chris Knowles from ALS provides such support via testing, especially on the bowling green. Other contractors support the other sports. Steve Birks from Trent Bridge advises Rob too. 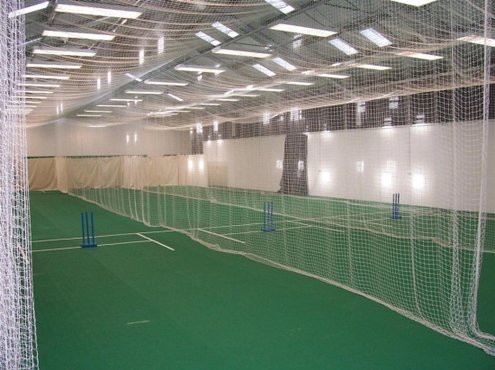 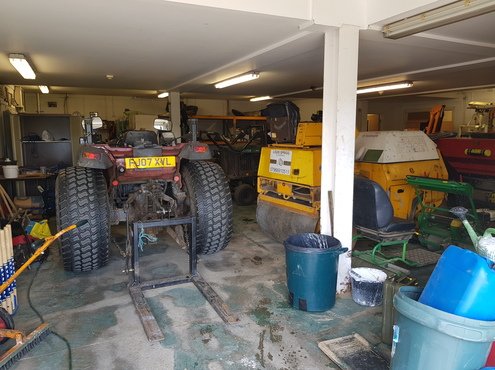 "I always get two or three quotes from that selection of companies when we need something done," Rob said. "I don't find there's much price difference between fertilisers and seed etc., but all of those contractors are helpful, which is the important thing."

"We use a lot of liquid fertiliser, because we've no irrigation here. The square has a ring drain, though, which runs southward towards the River Meden, a tributary of the River Trent."

"The only problems we get are related to the clay content, but it's all counteracted. The football fields are sand-based up top and there are drains on that side of the site too."

"In addition to the verti-draining of the football field and cricket squares - that's perhaps every three weeks, down to a depth of about ten inches, we've previously used the Earthquake."

"We had no problem using it in the winter, although I think it probably risks cracking the surface if you were to use it when it's dry." 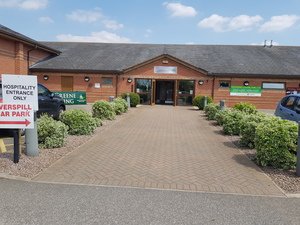 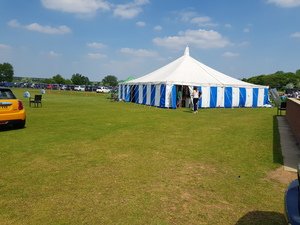 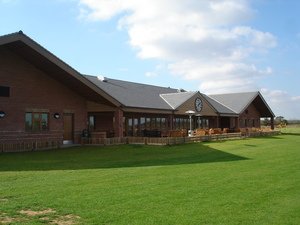 The cricket outfield is cut to 16mm, with a 12mm square punctuated by 6mm wickets. The square is prepared with a Dennis G860, the wicket with an Allett Shaver and the outfield with the Hayter.

"We've got a full flat sheet if we need it and some form of coverage for all of the square. If we know it's going to rain, we'll always cover up."

"On an average Monday, we'll clean the wickets from the Sunday and cut the bowling green. If the outfield wants cutting, or the football fields, we'll get that done. It's mostly to do with which sport is being used more at the time."

"We don't get pests or disease. We get weeds, but we've got the resources to spot-spray them - and, of course, hand-pick them - whenever they appear, so they never stay for long."

"That's all good, because it means the surface always looks great. I mean: you could have the worst ground in the world, but when you put a few stripes on it, kids will think it's great."

"But, I prepare it for the players. With Notts, our main priority is to keep them coming and playing here. They come here because it's a good pitch."

"We're discussing the possibility of becoming a more frequently used outground for four-day games, plus for the advent of this new 100-ball form of cricket."

"We've got to stay competitive too, because you've only got to look at the grounds around the country to see how much pitches have improved. Come the end of a season, many look like they haven't even been played on."

"I think they're being invested in more, which is the key. When you see a Test ground like Trent Bridge on TV these days, where the ECB have had input, the state of them is quite amazing."

Robert concludes by telling me that his son, Louis, has followed him into the industry. He now works at Worksop College.