0 Time for a Clean Up How often have you seen a tarmac sports surface, at a school or perhaps in a park, looking redundant through lack of care and maintenance? A bit tired and faded where vibrant lines once marked out netball and tennis courts? Suffering from excess moss caused by the shade of overhanging trees? Even if it's just once, that's one too many times as far as Technical Surfaces, the UK's leading artificial surface maintenance providers, is concerned. But such surfaces need not remain unused.

Tarmac sports surfaces are often afflicted by problems with moss, vegetation and a build up of contaminated material. As is common with tarmac areas that are open to the elements, after a while - and particularly during periods of inactivity - moss and algae can start to develop and become hazardous to players.

Tarmac areas are often overlooked in terms of maintenance, and whilst they are relatively low-maintenance they do still need looking after, as their condition can deteriorate over time. As well as proving unsightly, moss, algae and even tree debris can pose a health and safety risk, even if it only exists at the very perimeter of courts. It can be a constant battle, particularly at this time of year, to keep such material from migrating further onto the playing surface and threatening the playability of tennis or netball matches. Many schools, clubs and leisure centres are forced to put their tarmac facilities out of commission, losing much needed revenue for the owners and the enjoyment of playing matches for the users. 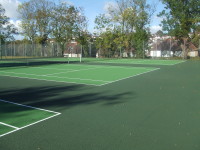 Technical Surfaces provides a Tarmac Court Renovation service to restore porosity, tread and slip resistance to tarmac surfaces, which incorporates an initial clean using their specialist Hydrotech® process, followed by power lancing and a full-surface chemical treatment. This helps to remove much of the troublesome moss and algae across the entire surface area, with immediate improvements to the appearance and traction across the courts. Once the surface is cleaned, a binder coat is applied to help prevent the tarmac from breaking up or 'fretting'. The line marking and colour-coating of tarmac courts is also refreshed, as existing lines often become discoloured and faded beneath the surface-level contamination.

Having completed any initial remedial works required, Technical Surfaces can also offer a customised maintenance regime designed to tackle issues of moss and contamination across the courts on a regular basis, ensuring that its customers can continue to provide a usable sports facility.

It is worth knowing that an unused, seemingly redundant tarmac sports surface is not always a no-starter: If your tarmac courts are in need of an overhaul, why not get ahead of the game and contact Technical Surfaces now to arrange a free site inspection and quotation.

For more advice, speak to a specialist pitch maintenance provider such as Technical Surfaces on 08702 400 700 and ask to speak to a Technical Manager. Alternatively, please visit www.technicalsurfaces.co.uk

Images: A before and after photo following work at a Tarmac Court Renovation by Technical Surfaces to restore porosity, tread and slip resistance to the surface.