by Neil Garland
in Cricket and Synthetics
on 05 Mar 2017 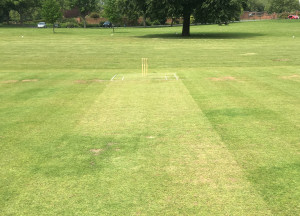 Neil Garland, Chair of the Warwickshire Cricket League Grounds Committee, bemoans the 'state of play' surrounding the quality of playing surfaces throughout the various leagues and suggests that non-turf pitches may be the way
forward

The Warwickshire Cricket League (WCL) is the second largest cricket league in the country, containing ninety clubs and involving nine divisions and eight regional divisions. These are split into a three band quality standard - Premier and Division 1, Divisions 2-7 and Divisions 8-12.

In the majority of cases through the Premier to Division 7, the clubs produce good playing surfaces, with two exceptions last season who, because of their failure to meet Divisional Pitch Standards, were relegated.

However, clubs that are well run, successfully putting out three, four or even five Saturday teams, are having more and more difficulty finding pitches to play on, and even more problems finding 'good quality' ones.

The underlying problem the WCL has found is that most pitches are provided by local authorities.

Birmingham City Council have some fantastic parks with dedicated grass cricket squares, but sadly, because of the cuts in government funding, the preparation and maintenance of these pitches are minimal, with hardly any pre-season rolling and weed removal.

Consequently, some clubs have been warned that their pitch is falling below the expected standard for their division.

The diminishing amount of professional groundsmen is also a worrying trend, as well as the ageing volunteers at many clubs who are not being replaced.

The loss of sports grounds to developers also gives cause for concern.

For instance, since the 1960s, when local factories provided very good sporting facilities for employees, in Coventry alone we have lost nine cricket venues, and now the city council do not provide a single cricket pitch for use.

How can the quality of pitches be improved?

Most local authorities are charging between £60 and £70 per game which, over a twenty match season gives a maximum income of £1400. This, to my mind, does not cover, in any way, the cost of producing a good quality cricket pitch. 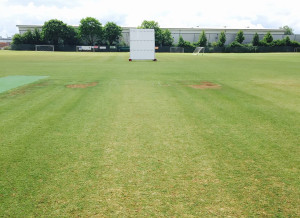 Based on these ball-park figures, about £6,000 per annum is required to maintain a satisfactory playing surface.

The local authorities need to take a good look at their pricing so that they are able to improve the pitches they prepare.
On the downside, clubs will then object to paying £300 per home game, because they also have to build in the cost of umpires, balls and teas.

The club members will have to pay more to play but, if four teams are playing, £15 per player per game would cover it.

Seeing that a 5-a-side football pitch for an hour costs £50 to hire, a six hour cricket match compares favourably.

The other alternative, of course, is non-turf (NTP) synthetic pitches. I am aware that this idea will go down like a lead balloon with the traditionalists but, cost effectively, I believe it is the best option.

For an outlay of £8,000, there is a low maintenance, good quality, even bounce pitch which needs little preparation. It could have a lifespan of ten years and, at a hire cost of £70 per game, the outlay would be recovered in approximately six years.

At the present moment, the Warwickshire Cricket League only allow NTP in division 10 and below, so a change of rule would have to be made.
So, for the sake of preserving the game of cricket as an affordable grassroots sport, a massive change of direction needs to take place.

Most schools have NTP in place, and the powers that be should be investigating the use of these pitches for clubs to play on. This would give the clubs a venue and the school an income. A win win situation, to my mind.

To this end, is it not incumbent on the County Cricket Boards to take on a more proactive stance and engage schools and local authorities in reversing the downward spiral we currently experience in providing good quality cricket pitches?

The views expressed are those of the author and are not present WCL policy.