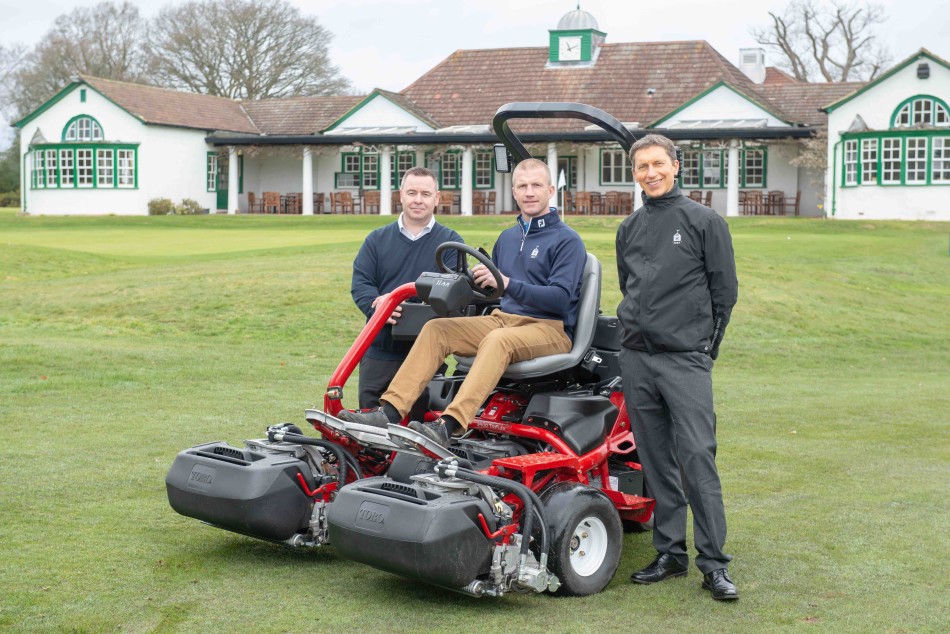 It's been a time of change for Woking Golf Club in Surrey culminating in the recent signing of a machinery agreement plan with Toro and Reesink Turfcare.

It all started a couple of years ago and has seen the appointment of Andy Ewence as course manager, major works to restore the course to its fast running heathland roots and the undertaking of some modern initiatives in preparation for the milestone 125th anniversary in 2018. The result is a club that has risen 22 places in the Golf World Top 100 Golf Courses in Britain and Ireland ranking in 2018, now ranked 17th in England, and the delivery of a new Toro fleet is the icing on the cake says Andy.

For 125 years golfers have been playing at Woking Golf Club, Surrey's oldest heathland golf course, and it was this milestone moment that sparked a period of change, confirms Andy: "My appointment in 2017 coincided with progressive plans for the club. There have been major works to the course and the pressure is always on to maintain and improve."

Andy has long been a Toro customer so is very aware of the quality of the machinery and the advice and service provided by Reesink Turfcare. At The Buckinghamshire, where he spent five years before joining Woking Golf Club, there was a five-year leasing plan for machinery in place and Andy had just finished overseeing the installation of a new irrigation system across the 226 acre course.

He says: "I knew from experience that Toro was well ahead of the competition, but it's like chalk and cheese when you compare Toro to what we had here before. The quality of machinery and the service is just unbeatable. However, we made sure to explore all the options when the last lease ended. We trialed machines from several different brands, but it proved quickly that Toro was the right way to go."

Now with a comprehensive Toro fleet which includes a Greensmaster TriFlex 3400, Groundsmaster 4000-D, ProCore 1298 and a Workman HDX-D to name a few, Andy is thrilled with how the new machines are meeting the needs of the club as it enters its 126th year.

"We have undulating greens, so having pedestrian mowers that provide precision and a high quality of cut is really important," says Andy. "In particular, the Toro Greensmaster eFlex 2120 is great. The Lithium-ion battery technology reduces noise so we can get out and start work earlier, plus it saves fuel."

And, as mentioned, it's not only the machines that have impressed Andy, but the advice and service from Reesink, too. "The whole process with Reesink has been great," he says. "They didn't try to sell us anything the club didn't need - they listened to what we wanted and came back with the best possible solution. They've also come in and given a day long training course to the team on how to use the machines. Nothing has been too much trouble."

Woking Golf Club is a prime example of golf course architecture. Designed by Tom Dunn and further improved by former members John Low and Stuart Paton, it has long been regarded as an essential place to study for aspiring and existing golf architects and with keen eyes on the club, Andy is confident that with Toro on board the course will go above and beyond expectations.

"I'm sure the playing surface is only going to improve massively with Toro now at the club," he says. "It's definitely going to bring the already high standard of the course up a notch, which we're all really excited to see."