0 To Russia with love

When Allett say they supply high quality reel mowers to some of the world's most famous sports grounds, they have reinforced it with their Russian distributor, Unisaw. The magnificent Fisht Olympic Stadium in Sochi Olympic Park was constructed for the 2014 Winter Olympics and was the venue for the opening and closing ceremonies. 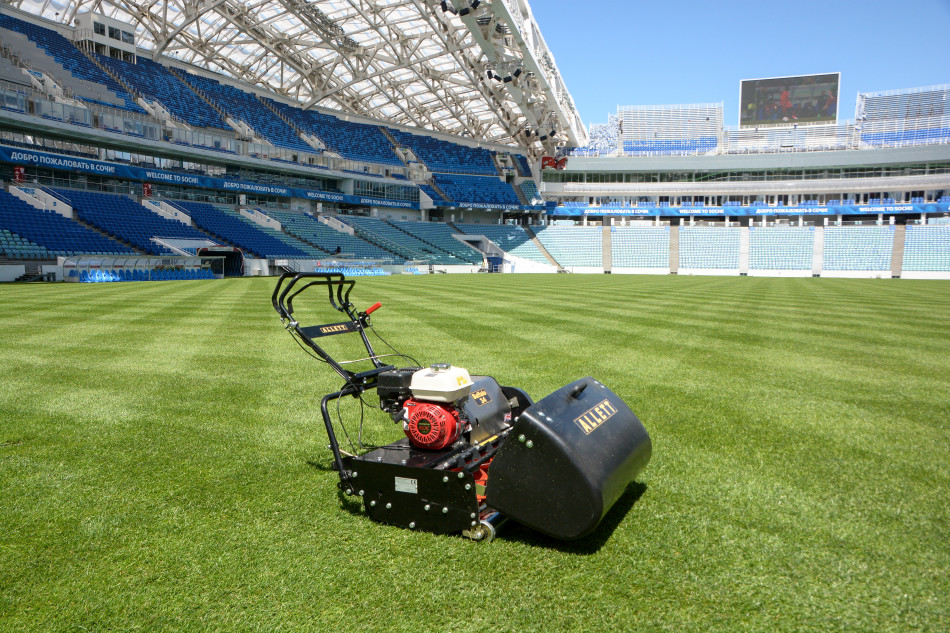 The 40,000 capacity stadium has recently been converted into what is now the open-air football Fisht Stadium for the 2017 FIFA Confederations Cup and 2018 FIFA World Cup. The complex has also been serving as a training centre and match venue for the Russian national football team.

Allett is the mower choice for the stadium which now has two Allett C34 machines, two Buffalo, two RM34 Rotary Mowers and an Allett BJB42 tractor mounted scarifier. The machines have been supplied by Unisaw, Allett's Moscow based distributor. The Allett C34 professional mowers were selected based on their design for sports turf surfaces, where low weights and a great finish are paramount. The easy-change C-Range cartridge head is an integral part of the machine, enabling fine turf mowing, verti-cutting, slitting, brushing, scarifying and sorrel rolling.

The Allett Buffalo is a true 'all-rounder' capable of producing a first-class finish across a wide range of grass types and mowing conditions, even in the wet. With its wider cut and low weight the Buffalo 34 is the machine for maintaining large, sensitive turf areas and is the choice of many of the world's largest football clubs.

Chosen by the Russian groundsmen at the Fisht Stadium, the Allett mowers have been put to work to create the finest pitch for the championships. The finish that has been created is loved by all and has invited such comments as:

"The stadium is simply magnificent, and the pitch is the best in Russia," says Dmitriy Kombarov, Russian footballer player; and from the Belgian Coach. "Fisht have the best grass pitch I have seen in the last 7 years!"

Complementing the maintenance of the finest grass surface is the Allett RM34 which was designed around feedback from stadium groundsmen, to develop a rotary mower with a full width rear roller to produce perfect pitch stripes. The twin contra-rotating blades and high lift system vacuum speedily and efficiently, providing busy grounds staff with greater capability in the post match clear up, and for mowing higher when grass is being grown in.

And completing the line-up at the Fisht Stadium, the Allett BJB42 tractor mounted scarifier, built for sports arenas, was chosen to make fast work of the stadium's seasonal scarification and turf renovation. Scarification and aeration is quick, with easy collection and dumping of removed materials, the design enabling scarifying, cutting lateral runners and root removal while also decompacting.

The Fisht Stadium has strong British connections in that it was co-designed by British design consultancy BuroHappold Engineering. Allett is a prime example of maintaining the strong tradition of building in Britain to the highest quality and exporting products they can honestly say the Russian groundsmen love working with.