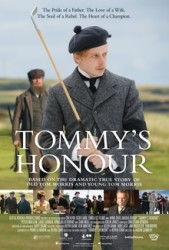 Following on from Tin Cup and Caddyshack, golf is about to make it to the big screen once again; this time in a more traditional story of the game.

Tommy's Honour is a biopic built around 18 holes of golf and documents the complex relationship between the pioneering Scottish golfing champion Old Tom Morris and his son Young Tom Morris as the latter moves to become a champion in his own right.

Most greenkeepers will know the name Tom Morris and perhaps the top award associated with it, presented by GCSAA. The Old Tom Morris award is bestowed upon an individual who, through a continuing lifetime commitment to the game of golf, has helped to mold the welfare of the game in a manner and style exemplified by Old Tom Morris. It was presented for the first time at the 1983 conference and show in Atlanta, GA.

In St Andrews, Scotland in 1866, 15-year-old Tommy Morris (played by actor Jack Lowden) is an avid golfer like his legendary and pioneering father, Tom Morris (Peter Mullan). "Old Tom" is greenkeeper for The Royal and Ancient Golf Club of St Andrews, as well as the town's club and ball-maker. He is the three-time winner of the first major golf tournament, The Open Championship, which he founded in 1860. He also established golf's standard of 18 holes per round. But young Tommy is beginning to chafe at his father's dictates, especially in the rapidly changing world they live in.

Tommy soon outshines his father, winning The Open three times in a row whilst still in his teens. The "dashing young man of golf", draws flocks of spectators to the sport and becomes its first touring professional.

Father and son repeatedly clash over the unwritten rules of social class, which reaches a head when Tommy marries his sweetheart Meg (Ophelia Lovibond), a woman of lower standing with a shameful secret in her past. As the story concludes, Old Tom makes a fatal misjudgement that strips Tommy of everything he holds dear. Following the results of that fateful choice, Old Tom takes on a personal mission that carries him through the final decades of his life: that of honouring his son Tommy.

Tommy's Honour is based on Kevin Cook's book "Tommy's Honour: The Story of Old Tom Morris and Young Tom Morris, Golf's Founding Father and Son." The book has received many awards, notably the 2007 Herbert Warren Wind Book Award. The film is directed by Jason Connery, son of Sean Connery.

Parts of the movie were filmed on location at St. Andrews.

It was first shown at last year's Edinbugh Festival and will go on general release in the spring of 2017.