0 Toro for the trio at Rushmere

When you're part of a small team having a fleet of machinery you can rely on makes all the difference as Rushmere Golf Club can attest to as it signs its third five-year lease deal agreement with Toro and Reesink Turfcare. 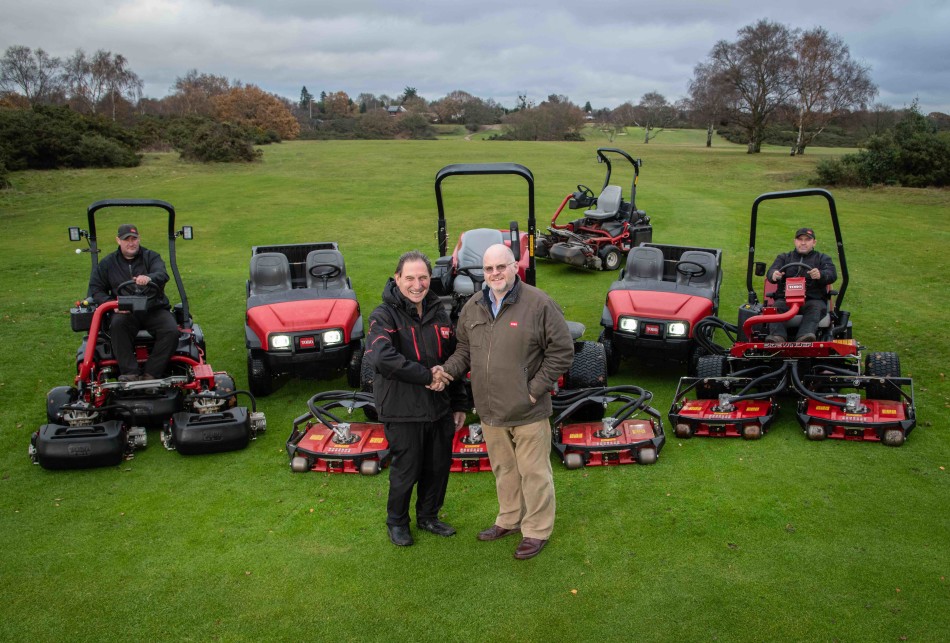 With just three greenkeepers at the historic 6200-yard, 18-hole course in Ipswich, Suffolk it is absolutely essential that the machinery brand head greenkeeper Pat Swinn invests in is the most efficient and reliable there is.

He says: "Efficiency and reliability in a machinery partner are often cited as the primary reasons for choice and use, but the importance of those two factors takes on a whole new meaning when you have a small team. For us those two things can equal the productivity of an extra person."

For Pat who has been at the club for 20 years and his greenkeepers - Michael Buck and David Driver, who have both been at the club for over a decade - there is simply nothing comparable to Toro in this respect, hence why the club is taking its relationship with the brand and its sole UK distributor Reesink Turfcare to 15 years.

Pat says: "Who we choose each time is a joint decision and every time it is unanimous. We stick with what suits us and the course. We stick with what delivers and aids us in our job, allowing us to be the most productive we can. We're active in our decision-making process and each renewal is competitive and each time Toro outperforms all others."

The machines that form the club's third five-year lease deal are two Greensmaster TriFlex Hybrid 3420 mowers, Groundsmaster 4500-D and two Workman GTX E utility vehicles, among many, which are like-for-like replacements. The Groundsmaster 3500-D Sidewinder however is a new addition to the club and quite the star of the show for Pat and the team.

Pat explains: "We're in the third stage of renovating all our bunkers and the sidewinder was brought in specifically for creating the perfect finish around the edges. It's delivering not only on that, but also for how easy it is to use. Adjusting the position of the units is so simple from the seat, it's really impressive."

A heathland course set on common land, Pat comments on how even maintenance is more of a challenge at Rushmere: "Course maintenance is constant. As a course on common land we have a lot of walking traffic and dogs coming across the course throughout the day. That can cause a significant amount of damage and requires vigilance to make sure the course presents for our members at all times.

"Toro is instrumental in helping us achieve that. The machines are very rarely on downtime, if parts are ever needed, they arrive promptly thanks to distributor Reesink's excellent service and the backup from rep Julian Copping is always there whenever we need it."

It's quite often thought that bigger is better and quantity over quality, we think the team at Rushmere is single-handedly proving that is not the case. Small but mighty is the name of the game here, made even more effective by the support of Toro.