The Toro Company has been named as the official supplier of irrigation systems and turf equipment for the 2023 Solheim Cup at Spain's Finca Cortesin Golf Club. 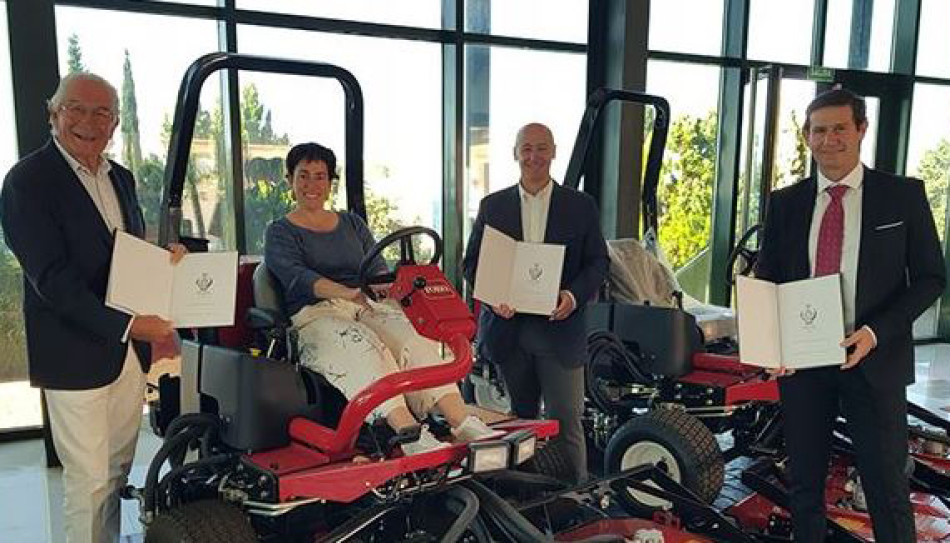 In addition, the Andalucìa-based club has extended its partnership with Toro and local distributor Riego Verde SA (Riversa) to continue supplying the course's fleet of golf course maintenance equipment.

"It's an honour to be selected as the official equipment and irrigation partner for the 2023 Solheim Cup, and we're thrilled to be continuing our relationship with Finca Cortesin," said Rick Olson, Chairman and CEO of The Toro Company.

Since 1990, the Solheim Cup has combined the tradition and prestige of golf with passion for one's country and continent. Held every two years, this transatlantic team match play competition features the 12 best European players from the Ladies European Tour (LET) and the 12 best US players from the Ladies Professional Golf Association (LPGA) Tour.

Located in the Costa del Sol region of southern Spain, the Finca Cortesin resort includes a luxury hotel and spa alongside the Cabell Robinson-designed layout that regularly features among the top five courses in Spain.

"Finca Cortesin strives for excellence in everything we do, from our golf course to our hotel and restaurants," said Vicente Rubio, President of Finca Cortesin Hotel, Golf and Spa. "We have renewed our partnership with Toro in support of our commitment to achieving the highest quality standards as we prepare to host the 2023 Solheim Cup."

As part of the agreement, Finca Cortesin will add new Toro products such as the Greensmaster 1026 walk-behind greens mower and the all-electric Greensmaster eTriFlex 3370 riding greens mower.

"We've introduced a number of practices on the golf course to be at the forefront of environmental sustainability, and the all-electric eTriFlex is the perfect complement," said Finca Cortesin Superintendent Iñigo Soto. "We chose machines with lithium-ion battery technology for the reduced noise and engine exhaust emissions, as well as the outstanding quality of cut."

The agreement with Toro also includes efficient models that meet Stage V engine emissions regulations implemented in 2019 in the European Union. The Reelmaster 7000-D semi-rough mower and the Groundsmaster 4500-D rough mower are part of this newer generation of fuel-efficient machines that will be used to maintain large turf areas at Finca Cortesin's championship golf course.

"Getting ready for an important tournament like the Solheim Cup requires top-notch equipment and a dedicated team," added Soto. "We're looking forward to working with Toro and having the support of our local distributor, Riversa, as course preparations get underway."

The 2023 Solheim Cup will not only mark the first time the championship has been played in Spain, but also the first time the event has taken place in such close proximity to the men's Ryder Cup competition, which is scheduled for September 28-October 1 in Rome. The two competitions are typically held in alternate years, but the schedule changed when the Covid-19 pandemic forced the 2020 Ryder Cup to be postponed.

Olson said: "As an official supplier for the Solheim Cup in Spain and the Ryder Cup in Rome, we are excited to have the opportunity to support back-to-back team events that showcase the top professionals in both men's and women's golf in Europe and the United States."