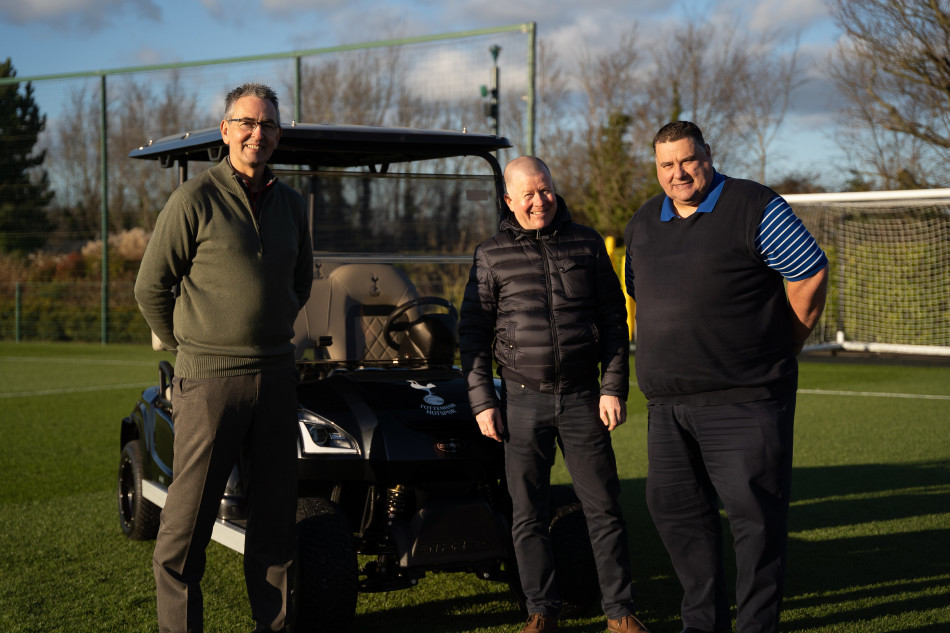 From right, Darren Baldwin, Head of Playing Surfaces and Estates at Tottenham Hotspur with Reesink's Richard Freeman and Dave French

As a fleet of STAR EV all-electric vehicles from distributor Reesink e-Vehicles arrive at the Training Centre in North London, Darren Baldwin, Head of Playing Surfaces and Estates at the club, which has topped the Premier League sustainability table produced by the UN-backed Sport Positive and published by BBC Sport for three years running, tells us why he chose STAR EV.

"We needed an alternative form of transport for staff and VIPs around the Training Centre that has a reduced impact on the environment," he explains. "We're already investing in electric options for tending to the pitches and what we needed next was an electric solution that encompassed golf buggies, people carriers, utility vehicles and ambulances."

Tottenham Hotspur is using 10 Capella Work Machines, three ambulances - two for the men's team and one for the women's - and a Sirius four-seater people carrier. All are electric and come with STAR EV's record of using high quality materials to create one of the most resourceful green vehicles on the market.

With Tottenham Hotspur a proud member of the UN Race to Zero, committing to halve its carbon emissions by 2030 and become net zero carbon by 2040, its partnership with STAR EV will help it secure a place in the top tier of sustainability in sport.

Darren has been at the club for 26 years and has certainly seen many pivotal points in the industry, and he says electric power is up there with the likes of the DESSO Grass master pitch and grow light technology in terms of key developments: "It's exciting, this stage of electric power. We've certainly achieved a lot so far but there's a way to go yet and it has a far-reaching spectrum. Yes, the vehicles play a key part, but this is just the start, it will encompass all sorts, such as electric lighting rigs, too."

With a grounds team of 45 using the machines, there's a lot of feedback on using the brand. Darren says: "We put feelers out to many manufacturers and found that STAR EV leads the market when it comes to a smooth ride, versatility, payload and towing capacity, battery life and performance. We all really like them.

"We also did a great deal of research into the right partner to work with. We already have a successful relationship working with Reesink UK for our turfcare machinery, so when we heard they had an e-Vehicles division focusing solely on electric vehicles we trusted them with delivering us with the best possible solution for an all-electric fleet."

To talk to Reesink e-Vehicles about the STAR EV range, call 01480 226800 or go online at reesink-evehicles.co.uk