Anyone heading into deepest Wales along the M4 can hardly fail to notice the imposing Celtic Manor Resort Hotel set atop Christchurch Hill overlooking the city of Newport. It is a journey our editor has made on numerous occasions, his eyes drawn longingly to the entrance, for it is a venue he had never before visited.

That is, until this summer, when he was invited to experience, at first hand, the preparations for the ISPS Handa Wales Open.

Not even a 'faulty' alarm clock could dampen his excitement!

Celtic Manor has achieved iconic status since hosting the 2010 Ryder Cup. Anyone who watched events unfold during the competition will have marvelled at the way the greenkeeping team, led by Jim McKenzie, managed to keep the course playable through some of the most atrocious weather ever to hit Wales; an effort that saw him being awarded an MBE in last year's Queen's Birthday Honours. 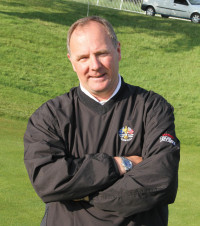 It is, of course, a tournament that Team Europe won in dramatic fashion and, later this year, they head off to the Medinah Country Club in Illinois to defend their crown.

The Celtic Manor Resort has hosted the Wales Open since 2000. This year's event was sponsored by ISPS Handa, an organisation founded by Japanese philanthropist Dr Haruhisa Handa in 2006 to support charitable causes throughout the sporting world.

The Wales Open is now considered to be one of the leading events on the European Tour schedule. Past winners include Ryder Cup stars Graeme McDowell, Robert Karlsson, Miguel Angel Jiménez, Ian Poulter, Paul Lawrie and Paul McGinley.

The resort offers three different eighteen hole golf courses - Roman Road, The Montgomerie and the newest, the Twenty Ten which, as its name implies, was built to stage the 2010 Ryder Cup. It was the first course to be built specifically for golf's greatest team tournament.

It is on the Twenty Ten course that the Wales Open is now played.

Jim McKenzie has spent the last twenty years developing the golfing experience at Celtic Manor whilst, at the same time, helping to raise its profile to become one of the best tournament venues in the UK.

Jim started his greenkeeping career at Haggs Castle Golf Club under Chris Kennedy, before moving to Cawder Golf Club to work under Alistair Connell. His first head greenkeeper's role was at Renfrew Golf Club, where he took over from George Barr. He moved to Wentworth, rejoining Chris Kennedy, in 1990, before moving to Celtic Manor in 1993 where he managed the construction of three 18 hole courses which, at the time, included Wentwood Hills as the championship course.

He subsequently oversaw the construction of the Twenty Ten course, which involved nine new holes and the remodelling of nine holes from the Wentwood Hills course to take advantage of the natural amphitheatre characteristics of the Usk Valley.

This was to be Jim's thirteenth Wales Open and the fifth time the Twenty Ten course had been used for the event, which has also been played over the Wentwood Hills five times and The Roman Road course three times.

With water hazards on half of its holes, the course presents many memorable tests and risk-and-reward dilemmas. One of the features of the course is its variety, with many of the earlier holes having a links-like feel with some long rough and greenside swales, before the middle section of the course reveals the full extent of the lake-lined challenge. A tough finishing stretch culminates in a real sting in the tail at the 18th.

The course's signature hole is the par four 14th, which brings classic risk-and-reward dilemmas with lakes on both sides of the fairway, but there are several other holes which can be considered to be equally memorable.

My plan was to join the team early on the morning of the Pro Am event, on the day before the tournament proper, to see just how they go about setting up the course, and also to capture some of the atmosphere of the event. An overnight stop at a local bed and breakfast, plus a 'faulty' alarm clock, meant that I eventually arrived at the course at 5.30am, somewhat later than planned! By this time, the team had already been out on the course for half-an-hour going about their various duties. A team of fifty were tasked with mowing every green, tee, fairway, approach and semi rough, raking all the bunkers and changing all the holes in under four hours.

My late arrival meant that I had to find where the team was working and, as this was my first ever visit, I had no idea where the Twenty Ten course was. Fortunately, one of the gardeners kindly directed me to the course's workshop.

Having grabbed my camera, one of the mechanics took me out to where the team were preparing the course. Here I met Chris Heales, the resort's acting Workshop Manager, who showed me around the course, stopping to catch pictures of the various stages of work going on. The weather was fantastic for photography; bright and sunny, with some early morning mist hanging over the lakes.

Chris has been at Celtic Manor for several years and was, for a numer of those, understudy to Pat Callaby who is now retired after eighteen years service to the resort. He explained to me that the working teams were split into two groups; one working on the top half of the course (front nine) and the other down in the lower plateau (back nine).

Chris has three mechanics to help him look after the colossal amount of equipment required, which is shared between the three courses, The majority of the machinery is supplied by Toro.

Each of the three courses has a designated team led by a head greenkeeper. Paul Davies looks after the Roman Road course with eight staff, Colin Fulton heads up the Montgomerie course, again supported by eight staff, whilst Gary Connell manages the Twenty Ten course with eleven staff. A team of four gardeners are employed

to look after all the formal gardens and areas around the hotel complex and clubhouses. During the summer months, additional seasonal staff are taken on to support the greenkeepers.

A specialist irrigation team of Neil Shepherd, Paul Green and Noel O'Connell are responsible for maintaining all the irrigation equipment on site and ensuring it works perfectly, However, this year, they've had little need to use it, as there has been so much rain - 120mm in April, 106mm in May and 230mm in June - a staggering total of 456mm (18.24 inches) in just three months.

I spent the next few hours following the greenkeeping staff around, watching them prepare the course ready for the start of the Pro Am at 8.00am. Wherever I looked there were greenkeepers carrying out specific tasks.

The greens where being double cut at a height of 2.5mm and doubled rolled with turf irons. Tees were being pedestrian mown at 9mm, fairways at 11mm and semi-rough at 25 and 50mm. Chris explained that all the mowing equipment had been serviced and, more importantly, sharpened the week before the tournament. A team of technicians from Bernhard Grinders were on hand to help set up the fleet of mowers.

After watching the highly organised activity for a while longer, Chris then took me to the 18th green, where I met up with Jim, who was overseeing final preparations near the clubhouse. As always, he is the first to praise his dedicated greenkeeping, gardens, irrigation and workshop teams for all the hard work they put in, not only for this one event but on a daily basis to ensure the resort's three golf courses and associated areas always look their best.

He also commented on the fact that a good number of his staff have been with him for many years, several since the first course was completed back in 1995. This helps enormously, as each course tends to have its own microclimate and needs managing in a different way.

For most of the year, each dedictated team of staff manage their own course, However, on occasions, and especially when there's a big event on, the staff come together and share equipment and resources to ensure the chosen course is seen at its best. 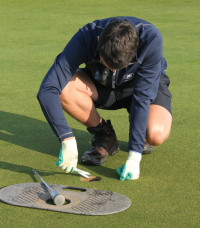 It was now 8.30am and virtually all the course preparations had been completed. It was time for breakfast. During the competition, all meals are provided for the greenkeeping staff - breakfast, lunch and evening meal. It is important the staff are well fed and watered, with additional rest breaks planned during play.

For the next five days the routine is very much the same; an early start to prepare the course, which has to be completed by 9.00am. After breakfast, Jim briefs the team on last minute changes, latest golfing news and any issues that have to be addressed. They then split into three working groups - one on duty during play, one resting and the other keeping on top of work on the other two courses.

The morning period allows Chris and the mechanics to check over all the machines and get them ready for the evening maintenance run. As soon as the day's play is finished the team are back out on the course, checking it over, and giving a single cut to all the greens. Tees, fairways and any other grass areas may also be mown as required. A number of staff are tasked with divoting tees and fairways.

Once this work is completed, the staff go home and grab some sleep, ready for the next day's early morning start.

I certainly enjoyed meeting Jim and his staff who, without doubt, manage one of the most successful golfing resorts in the UK. The Twenty Ten looked in prime condition, ready to provide a demanding test of golf for this year's Wales Open.

Every member of staff I talked to said that they particularly enjoy setting up the course for prestigious events.

In being awarded his MBE, Jim McKenzie joins a select band of greenkeepers who have been similarly honoured for their achievements. These include Walter Woods BEM, Jack McMillan MBE and Jimmy MacDonald MBE.